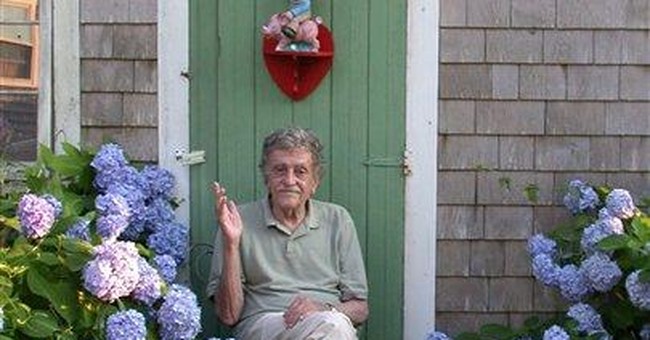 A guard would go to the head of the stairs every so often to see what it was like outside, then he would come down and whisper to the other guards. There was a firestorm out there. Dresden was one big flame. The one flame ate everything organic, everything that would burn.

It wasn't safe to come out of the shelter until noon the next day. When the Americans and their guards did come out, the sky was black with smoke. The sun was an angry little pinhead. Dresden was like the moon now, nothing but minerals. The stones were hot. Everybody else in the neighborhood was dead.

There was a darkness at the center of Kurt Vonnegut's life, or at least his art, that would have made Vincent van Gogh's troubles seem light and airy. Van Gogh exorcised his demons by lighting up the starry night, painting a room forever blue in our memory, carving color into canvas and into the minds of succeeding generations, shedding light and joy and sheer amazement at the sight of the world to this day. Kurt Vonnegut responded differently. His became the voice of a scarred generation, a master of bitter satire. So it goes.

At the outside, Vonnegut's prospects would have seemed bright indeed in the Indianapolis of the early 1920s. His father was an architect, his mother an heiress. But you never know what goes on inside others' walls, physical and mental.

The Depression, the Great one, left his father without steady work. Nothing was being built. The foundations of this ever-buoyant, ever-optimistic, ever-new America were shifting, sinking, crashing.

His mother's moods became more than moods. Young Kurt saw it all and felt it all. "When my mother went off her rocker late at night," he would remember, "the hatred and contempt she sprayed on my father, as gentle and innocent a man as ever lived, was without limit and pure, untainted by ideas or information." The poor, tormented woman would commit suicide. So it goes.

Her son would never get over it - her fear and despair and his own fear of both. His struggle to deal with all that would shape his voice, and make his books and novels and essays the voice of so many others who felt outside an ever-buoyant, ever-optimistic, ever-new America that, to them, was nothing but an ever-old fraud. And his pop art would flourish, like some dark inner growth, whenever America didn't. So it went.

No matter how bright or exemplary a personal life he would live, Kurt Vonnegut would never lose touch with his old darkness; it nourished him and delighted his fans, who thought it profound. It was his way of holding on to what is called sanity. Even if it reduced his art to one wry, simple, popular dimension, appealing to all of us who have ever looked around and asked, "Is this all there is?" His admirers were legion. He made them feel superior to happiness. Which made them happy. So it goes.

Young Vonnegut would be born again, in a difficult delivery, when he went off to war and returned old Vonnegut. He was with the 106th Infantry when his unit was trapped in the Battle of the Bulge and torn beyond shreds. He wandered, lost and alone, for days behind enemy lines before he was captured, and sent to a prisoner-of-war camp outside beautiful, picturesque cathedral-spired Dresden. Which would promptly be firebombed into a vision that would make Dante's Inferno seem light opera. So it goes.

POW Vonnegut had been assigned to a work detail in an underground meat locker. It was the only reason he survived to tell the tale. Again and again. In essays and poems and novels and nightmares. ("The corpses, most of them in ordinary cellars, were so numerous and represented such a health hazard that they were cremated on huge funeral pyres, or by flamethrowers whose nozzles were thrust into the cellars, without being counted or identified." - Kurt Vonnegut, "Fates Worse than Death.") So it went.

Is it any wonder he would take refuge in sci-fi, and invent a whole constellation of alternative universes? Or that in one of them he would create the Church of God the Utterly Indifferent? Only by despising hope did he seem able to hold onto it. So it goes.

Much like his friend and fellow author Joseph Heller, another clever fellow, Kurt Vonnegut would sneer at hope. How could anyone hope in a world that was just one big Catch-22? Anyone who ever felt that way - and who hasn't at some time? - would find in Vonnegut a fellow traveler on the cynical road to nowhere. Another war came, as they will, this time in a place called Vietnam, and Vonnegut's books struck a despairing chord. The iconoclast found himself an icon, the exposer of cults a cult figure. So it goes.

From first to last, Kurt Vonnegut was haunted by death, and made a good living at it. So it goes.

He would title his last book, a collection of his essays, "A Man Without a Country," yet there was something inescapably 1940s pulp-fiction, very American about him. The harder he struggled against his Americanness, the more he personified it. So it goes.

Only a nihilist of the more superficial sort might take comfort in Kurt Vonnegut's message, or rather his futile insistence on not having one. But in his struggle, in his refusal to give up, in his Danny Kaye dance through Gehenna, in his ability to make contact with the young and despairing by mining his own despair, there is a message: Never give up.

In the end, looking back on his indomitable drive to proclaim the hopelessness of it all, one comes away with the strangest realization: Kurt Vonnegut's life was full of hope. He would be heard, long and strong, in a world he claimed wasn't listening. So it goes.