When in Doubt, Act Offended 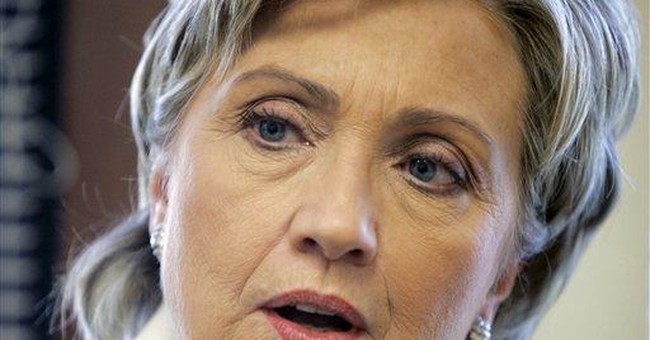 These days American politics seems to have become a contest to see who can be most offended. In this Age of Political Correctness (to a fault), the political operatives who once specialized in the bean ball adopt the slider. Rather than respond to criticism, they act offended by it.

Here's the latest case in point: David Geffen, a Hollywood big and therefore Big Giver, was chatting about the Clintons the other day, saying much the same things a lot of folks have said during the long, exhausting course of Bill and Hillary's rise and fall, and rise again. Here, among other catty things, is what Mr. Geffen told Maureen Dowd, today's Louella Parsons of political columnists:

"I don't think that another incredibly polarizing figure, no matter how smart she is and no matter how ambitious she is-and God knows, is there anybody more ambitious than Hillary Clinton?-can bring the country together. I don't believe in the last six years, all of a sudden Bill Clinton has become a different person. Marc Rich getting pardoned? An oil-profiteer expatriate who left the country rather than pay taxes or face justice? Yet another time when the Clintons were unwilling to stand for the things that they genuinely believe in. Everybody in politics lies, but they do it with such ease, it's troubling."

Ooo-wee,that smarts. Mr. Geffen, who's now backing Barack Obama for president, wasn't holding back. His assessment of the Clintons was enough to bring poor Bob Kerrey to mind. Remember him? A one-time senator from Nebraska, he once casually mentioned that "Clinton's an unusually good liar. Unusually good."

And that was as early as 1996-before Bill Clinton's sworn testimony in the late unpleasantness known as L'Affaire Lewinsky. In the end, contrary to Bob Kerrey, Bill Clinton did not prove all that good a liar. He got caught.

One of Hillary Clinton's great assets in her presidential campaign, perhaps the greatest, is her spouse, who may be the best politician-well, the best vote-getter-in recent American history. Alas, he may also prove her greatest handicap, since he drags the scandal-filled Clinton Years behind him wherever he goes.

Remember how We the People were going to get two for the price of one back in '92? That theme seems to have disappeared from the current Clinton presidential campaign, and for understandable reasons.

Conflating the two Clintons is scarcely fair-it wasn't Miss Hillary who admitted to giving false testimony-but it's bound to happen. The two Clintons are as inseparably linked in the public mind as they are in Mr. Geffen's.

That such talk should come from David Geffen, who once enjoyed Bill Clinton's confidence and hospitality, complete with the Lincoln Bedroom treatment, adds authority to what otherwise would have been cocktail party chit-chat. It must have hurt. So much so that the Clinton campaign played the I Am Deeply Offended card, which has become the standard substitute for rebuttal in American political debate.

The Clinton machine wasted no time demanding that Barack Obama's campaign renounce David Geffen's support and give back any funds the Hollywood mogul had raised for Sen. Obama's presidential campaign. Meanwhile, Senator Clinton herself was clambering up to the high ground ("I want to run a positive campaign") and warning against, yes, the Politics of Personal Destruction.

Tell that to Billy Ray Dale of the White House travel office, who had to defend himself against false accusations when the Clinton administration purged that whole office in its opening days.

But that was long ago, and Hillary Clinton has undergone many a makeover since. Now, while her flacks try to blame Barack Obama for Mr. Geffen's broadside, she adopts the above-the-battle stance of any establishment pol when challenged by some upstart. And her campaign staff has learned that, these politically correct days, the best offense is to sound offended.