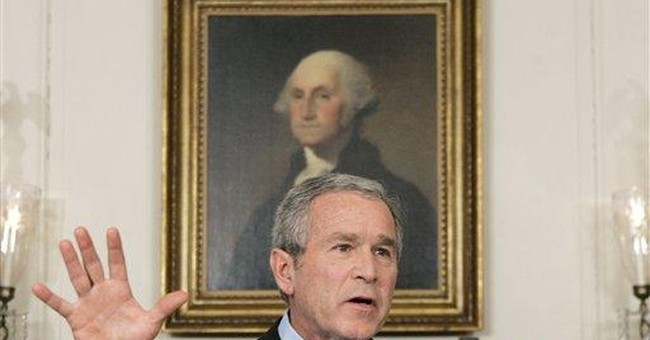 It's happened: An increasingly unpopular president has been confronted by a congressional subpoena for information about political decisions made at the highest levels of the executive branch.

The president well understands the danger of making one branch of the government privy to the confidential discussions of the other. For to grant Congress the power to compel testimony from his top-ranking aides is to upset the delicate balance between supposedly co-equal branches of government. How equal can they be if the legislative branch is given access to the candid, confidential discussions of the executive?

How long will such discussions remain candid if the president's aides - and future aides - realize that what they say in confidence may not remain confidential? Do we the people really want to deprive our presidents of such counsel? That's another reason for recognizing executive privilege: to assure that some confidential discussions remain confidential. Without that assurance, any advice a president receives might soon lose its value, for presidential advisers might not dare say what they really think.

Rather than heed the congressional summons, the president explained that, if he did, the constitutional separation of powers "would be shattered, and the president, contrary to the fundamental theories of constitutional government, would become a mere arm of the legislative branch of the government (for) he would feel during his term of office that his every act might be subject to official inquiry and possible distortion for political purposes."

The president who made that point wasn't George W. Bush this week but Harry S Truman in November of 1953, when the House Committee on Un-American Activities subpoenaed him to testify about what he knew about communists in government and when he knew it.

Mr. Truman knew better than to let that bunch start rummaging through his or his administration's confidential papers and discussions. After all, he'd once been a member of the U.S. Senate himself. And, as such, quite an investigator. If he hadn't defended the independence of the executive branch, his presidency and every successive one would surely have been significantly, maybe fatally, weakened.

Harry Truman was in good company. The doctrine of executive privilege is almost as old as the Constitution itself, and flows naturally from its separation of powers and creation of independent branches of government to check one another, not dominate another.

Executive privilege has been invoked by presidents going back to George Washington in 1796. Among others who've cited it were Presidents Jefferson, Monroe, Jackson, Tyler, Polk, Fillmore, Buchanan, Lincoln, Grant, Hayes, Cleveland, both Roosevelts, Coolidge and Hoover. And, in more recent times, Richard Nixon and Bill Clinton.

Speaking of the latter, the courts certainly have the right to allow subpoenas in order to obtain evidence of a crime - like Richard Nixon's White House tapes or Bill Clinton's grand jury testimony. Hence the attempt to manufacture a crime out of this president's decision to replace eight federal prosecutors - all political appointees. Call it trial by media.

If you still think letting Congress force the president's top advisers to testify under oath is a good idea, consider what would happen if the tables were turned, and the executive branch were allowed the same power over the legislative branch. Instead of Democratic congressmen getting to grill aides like Karl Rove and Harriet Miers under oath, suppose Rove & Co. could make Hillary Clinton or Chuck Schumer or Ted Kennedy reveal the details of their confidential political discussions?

The power to subpoena is the power to destroy. As Harry Truman well knew. Here's hoping George W. Bush does. Because if he allows Congress to invade the confidences of his presidency, he will pass on a much weakened executive branch to his successors. On this issue he needs to stand fast.

For now this president seems to be trying to reach some halfway, or maybe quarter-way, compromise with his critics in Congress. He's offered to let them question his top aides off the record, with no transcript recorded or notes taken, and certainly not under oath. But surely that gesture would not satisfy congressional inquisitors. And it smudges what ought to be a clear line between separate, independent branches of government.

Rather than play such games, this president - like a long line of his predecessors - should hold fast to his principles. The integrity of the executive branch of government, along with the separation of powers in a constitutional republic, depends on it. He shouldn't budge.

And if George W. Bush is tempted to, somebody should direct him to Harry Truman's letter of November 13, 1953, to the House Committee on Un-American Activities. Or to one of Alexander Hamilton's Federalist Papers on the need for a strong executive independent of the legislative branch - not under its thumb.