Free At Last: Little Rock Out of Court 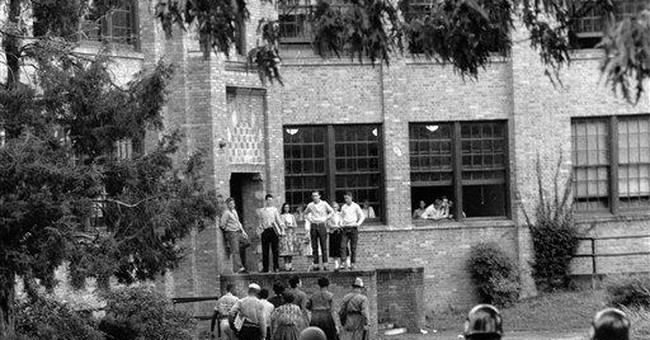 The news last Friday out of a federal district court in Little Rock, Ark., may have marked the end of the oldest established permanent floating school desegregation case in the United States.

Or at least the beginning of the end. There's still a lot of lawyerin' and politickin' ahead, all of which will continue to distract from the real business of education here in Little Rock and anyplace else - what goes on in each classroom between each student and teacher.

Maybe someday soon we'll get to concentrate on that in little ol' Little Rock - instead of the enormous legal fees, myriad reports, bureaucratic infighting, and legal confrontations that spill over into the community as a whole.

But for now let's pause for a rare moment of celebration amidst what for years looked like the state and local version of Dickens' Jarndyce v. Jarndyce - the kind of case whose principal function is to support generations of lawyers.

Because for now a federal judge has found that Little Rock's school district acted in good faith to remove racial barriers, and released the district from court supervision.

It was an historic day, marking the end - at least for now - of a 24-year-old case that was only the latest phase in an epic of litigation that goes all the way back to the bad old days, specifically 1956.

Before starting to throw confetti, a couple of caveats: The Hon. William R. Wilson's decision may be appealed. And this whole, very long-running case and saga won't be concluded till neighboring school districts are out of court, too, for they were involved in fostering racial segregation in the schools, too.

But now one can envision the end of all this litigiousness and the bad feelings that go with it. Roy Brooks, the school district's reform-minded and results-oriented school superintendent, may finally be able to focus all his considerable talents on education instead of litigation.

No, we haven't reached the mountaintop, but at least we can glimpse it from here.

This decision also marks considerable progress for (Wild) Bill Wilson himself. The judge's 49-page order is marked by more than his usual informality. It shows a sense of proportion and perspective, and just plain common sense in general. Not to mention good will toward all concerned, including those witnesses the judge didn't much credit.

Judge Wilson has shown not just deference toward a higher court and the impartial spirit of the law, but maturity and even humility. "Upon mature reflection," he wrote, "I wholeheartedly agree with (an Eighth Circuit justice's) criticism of my decisionŠ." Gosh, I hope His Honor is feeling well.

Taking his cue from the Eighth Circuit Court of Appeals, the judge dropped his former insistence on the school district's reaching some impossible, only vaguely defined standard that kept shifting. A bridge too far, he called it-an assignment "like trying to reach the mirage in the desert."

Instead, the judge asked only that the district demonstrate good faith, and found that it had done so. But as he also noted, Little Rock's school district still needs to continually evaluate its desegregation programs - "not because a federal judge thought it was a good idea, but because it is the right thing to do to help improve Š academic achievement."

This decision shouldn't represent an end of concern about local education, but a new beginning, one that can concentrate on what the kids are learning rather than what the courts are requiring.

Or as Judge Wilson himself put it with democratic flair, his decision means that Little Rock's school board "can now operate the district as it sees fit, answerable to no one except (the school district's) students and patrons and the voters who elected them to office."

If those voters just sit back, lose interest, and allow Little Rock's school board to become just the creature of the sort of teachers' unions that put adults' pay and perks and privileges above student achievement, then this ruling won't amount to much.

But if this ruling frees students and parents, teachers and administrators, and concerned citizens in general to concentrate on education itself, it will indeed prove a landmark decision for Little Rock and maybe far beyond.

Today the most prevalent form of racism in the schools is "the soft bigotry of low expectations." That challenge has yet to be met, or perhaps even fully confronted.

There are still too many who see no need for change n the status always quo, who are content to just shrug their shoulders and say nothing can be done, dismissing any and all reforms, from merit pay to standardized testing, as useless. Or even some kind of sinister plot. The struggle against that kind of apathy has only just begun.

But this ruling removes any excuse for settling for the mediocre in local education. Folks here won't be able to blame any and all of the schools' problems on the courts any more. Now it's clear that it's up to us to improve public education.

There was a time-half a century ago-when the name Little Rock stood for a constitutional crisis, for defiance and disruption. Wouldn't it be something if Little Rock now became a national byword for academic achievement, for quality education for all?