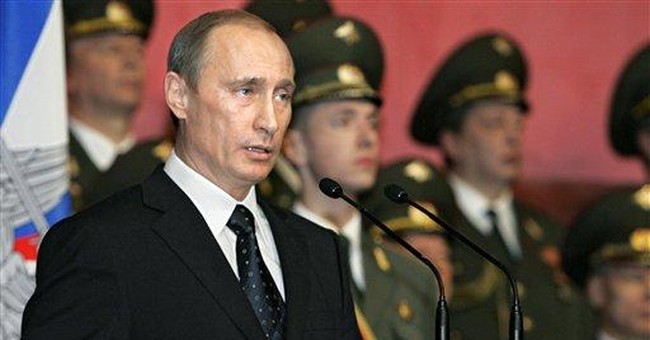 It was just like old times, specifically the Cold War, There was a Russian leader lambasting American imperialism. Addressing an international conference in Munich on security and cooperation, Valdimir Putin did his best to disturb both by reciting a long list of American sins, among them:

-Washington is starting a new nuclear arms race by developing a defense against ballistic missiles. Shades of Ronald Reagan and Star Wars! Remember how the Kremlin used to explain why defense is offense and black is white? Talk abut deja vu.

-Letting the Baltic states into the NATO alliance, rather than uniting Europe and shoring up its defenses, is an aggressive act. Just as deploying Pershing and cruise missiles in Europe during the Reagan Years was an act of provocation, not a deterrent to war. (History, the final judge, said otherwise: There was no war, and soon enough there was no Soviet Union, either.)

-By encouraging democracy in the former Soviet satellites of eastern Europe, and even dispatching international observers to assure free elections in former Soviet satellites, the Organization for Security and Cooperation in Europe has been turned "into a vulgar instrument of insuring the foreign policy interests of one country." (Gosh, what country could that be? Hint: Its capital is Washington.)

Russia's new autocrat has a point. Freedom, democracy, fair elections Š of course they're in America's national interest. But they also benefit those nations that adopt them and the world in general. Because a freer world would be a safer world. Democracies may have their differences, but free and slave societies tend to have wars.

As familiar as all this Cold War rhetoric is, something's missing. Where's the call for international revolution, for the masses to rise up in revolt? There wasn't a trace of anything like that in Vladimir Putin's polemic. Because now the United States and the West in general are being assailed by a Russian leader, not a Soviet one, and Russia no longer represents a dynamic, revolutionary ideology. Today its leader speaks only for, to borrow a phrase, "the foreign policy interests of one country." The Russian bear has reverted to its 19th Century role as one more great power playing the Great Game of realpolitik, nothing more.

Winston Churchill's old theory about what motivates Russian foreign policy is acutely relevant again: "I cannot forecast to you the action of Russia. It is a riddle, wrapped in a mystery, inside an enigma, but perhaps there is a key. That key is Russian national interest."

As the ideological wrapping comes off Russia's actions, they are revealed as those of just another imperial power seeking to assert itself. Now free of the Marxist dogma and the impulsive decisions it inspired - like deploying nuclear missiles in Fidel Castro's Cuba - Russia's actions become less dangerous, more predictable.

This not-so-new Russia is basically asking only for what the old, czarist one sought: power, respect, fear. Not worldwide revolution. That's a definite improvement.

If any country now represents a revolutionary idea in the world, it is this one, just as it has done since 1776. The theory that all men are created equal, that they are endowed by their Creator with certain unalienable rights, and that among those are life, liberty and the pursuit of happiness. That notion will always be revolutionary.

What has changed is that ideas like democracy and human rights no longer have a powerful competitor in Marxism-Leninism. Not in Russia, which has returned to its autocratic ways, and not even on the Chinese mainland, which looks more and more like a capitalist dictatorship every day - although the preferred phrase in Beijing is "socialism with Chinese characteristics."

Only on American college campuses does Marxism retain much attraction, and even there it must put down periodic revolts by more independent thinkers.

Something else has changed since the old days. When a Nikita Khrushchev would bang his shoe on the table and warn that he and his sort would bury us, the immediate, natural impulse was to respond in kind. That impulse may still be there, but these days it's controlled. The usual pundits may not have noticed, but this administration has changed, too. Fighting a difficult war will teach leaders a certain humility.

In response to Comrade Putin's tirade - excuse me, Mr. Putin's pointed criticisms - the new American secretary of defense, Robert Gates, responded with Š a soft word. The kind that turneth away wrath. He refused to be provoked. He summed up the essence of his remarks in a single sentence: "One cold war was quite enough."

Secretary Gates' gentle touch provided yet another reminder that one need not shout to be heard. He was particularly impressive when he responded to Tsar Vladimir's angry speech the day before with a touch of humor: "As an old cold warrior, one of yesterday's speeches almost filled me with nostalgia for a less complex time. Almost."

Noting that both he and former KGB agent Putin had served in their countries' intelligence agencies, Mr. Gates remarked that "old spies have a habit of blunt speaking. However, I have been to re-education camp, spending four a half years as a university president and dealing with faculty."

That observation drew laughter and applause. His audience of diplomats understood, like Woodrow Wilson, why faculty fights are so vicious. (The stakes are so small.)

In case you haven't noticed, Donald H. Rumsfeld isn't U.S. secretary of defense any more. And this one is a decided improvement.

Meanwhile, the president's national security adviser, Stephen Hadley, has journeyed to Moscow to assure the Russians that those new anti-missile defenses in Europe present no threat to their country; he pointed out that they're designed to deter others farther East from acting on any wild ideas about unleashing a nuclear holocaust. No need to mention any specific countries or personalities. For example, Iran's Mahmoud Ahmadinejad.

Over at the State Department, Condi Rice's latest, wary deal with North Korea makes it clear that John Bolton doesn't work there any more. However grateful all of us can be for his valiant and even effective attempts to clean up the United Nations, it was time for a new tack. This one was taken together with Russia, China, Japan and South Korea, not unilaterally.

The idea that conservative rhetoric should show a decent restrain is being revived. The Ann Coulters are still valued, but only for their entertainment value. The old conservatism of quiet good sense, even good humor, is making a comeback, the neo brand is being phased out.

The realization dawns that there's no need to respond in opposite but equally strident tones to every vitriolic attack on American policy from a Putin or Chavez or Ahmedinejad. That, too, is a decided improvement. This republic, unlike Russia's resurgent autocracy, is too powerful to have to emphasize its power.

One keeps hearing demands from this president's critics that he change his ways, adopt a more multilateral approach, and generally moderate his foreign policy. Let's not spoil their fun by pointing out that he has already done so.