Hold On To The Plow 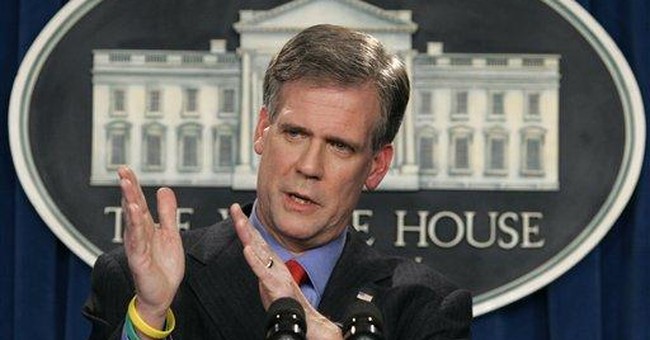 My robe gonna fit me well,

Tried it on at the gates of Hell,

Keep your hand on the plow,

You could hear the slight weariness, the semi-artificial cheer, the hurry-slowly tempo in Tony Snow's voice. The president's always pressed-for-time-and-running-late spokesperson was conducting still another pre-State of the Union conference call Tuesday afternoon at about 3:30 Washington compressed time. He was talking to a passel of us editorial writers in the hinterlands, but even out here his boss's poll numbers were sinking almost as low as Harry Truman's during the lowest, most discouraging point in the seemingly endless Korean War.

Tony Snow was going right down the president's formal domestic agenda from CAFE standards to Doing Something About Entitlements, and trying to make it all sound new and hopeful. Even though all of us on the line knew that few if any of these proposals had a chance in hell or a Democratic Congress.

Once again the president's man was doing his duty, and not just dutifully but zestfully. He was speaking for an administration that, like the one before it, had lost control of Congress and now, entering its seventh year, is just going through the motions. At least when it comes to the usual grab bag of domestic reforms.

My only question during the conference call: Will the president say anything new about Iraq? Tony Snow's answer, though spirited, was, in essence, No. But he said it in a very positive way.

And yet, when the president got to that part of his speech Tuesday night, there was something new about him, mainly his chastened manner. He was more impressive than he had been in his spread-eagle mode a couple of States of the Union back, when he was in full Wilsonian flight, about to remake the whole world, including all of Dar-al-Islam, as a Jeffersonian democracy. George W. has sobered up considerably since, and the change is a decided improvement.

This time there was none of that Pollyannish The State of the Union is Sound and Everything Is Coming Up Stars and Stripes, Mission Accomplished business. Instead, he began: "This rite of custom brings us together at a defining hour - when decisions are hard and courage is tested."

I liked this humbled George W. Bush better. He isn't glossing over anything, but he's still, yes, holding on to the plow. The best thing he said was addressed to the critics before him:

I respect you and the arguments you have made. We went into this largely united - in our assumptions and in our convictions. And whatever you voted for, you did not vote for failure. Our country is pursuing a new strategy in Iraq, and I ask you to give it a chance.

A chance may be too much to ask after all this time and sacrifice, and after all this president's now undeniable blunders, but some of us, the dwindling number of us still in his corner, respect him for refusing to give up. Like a Democratic president from Missouri at another critical time in a worldwide struggle, the man fights.

There were more impressive words than the president's in the news last Tuesday. They came from the new commander he has chosen in Iraq: Lt. Gen. David Petraeus, who was telling it like it bloody is before the Senate Armed Services Committee:

"The way ahead will be neither quick nor easy, and undoubtedly there will be tough days. We face a determined, adaptable enemy. He will try to wait us out. Any such endeavor is a test of wills, and there are no guarantees."

There never are in war. There are certainly no guarantees Congress will support this new initiative. Even if George W. Bush has finally found his Grant, as the nation's first Republican president eventually did, will Congress support this new general and his new strategy? One senator after another is switching from supporter to opponent of this war.

A study in triangulation, the senator now favored to be the next Democratic presidential nominee listened warily to the new commanding general's testimony, then jumped him. Calculation, thy name is Hillary Rodham Clinton, or Hillary Clinton, or whatever her name is these days.

Having voted for the war, the junior senator but senior triangulator from New York now pushes her chips to the other side of the board. These days, without using the word, she's betting on defeat.

It scarcely matters. If this Grant should somehow, improbably succeed, Sen. Clinton will explain that she was for victory all along. It is not the calculators that matter now, or have ever mattered. It is whether the rest of us will hold on to the plow.