An Evening With General Lee 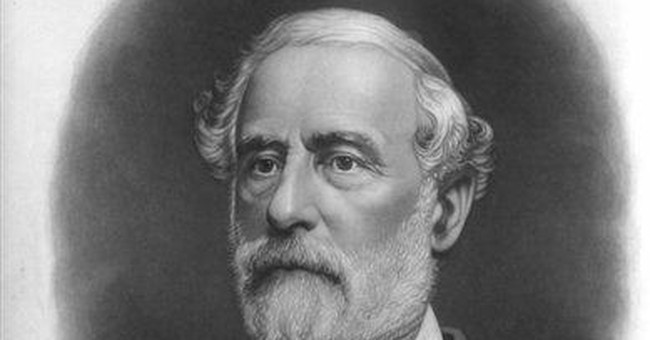 In the writings of the Ephesians there was this precept, constantly to think of some one of the men of former times who practiced virtue. -Marcus Aurelius

It has been raining hard two days going on three here in Little Rock. It is a weekend night, when the everyday hubbub in the office has abated, replaced by the steady beat of the raindrops against the skylight. It is the perfect accompaniment for my annual visit with the general, dampening every other sound, shutting out the always shouting, self-absorbed present.

Every year, as Jan. 19 approaches, the general's birthday, I feel like some visitor from the future setting his bags down in unfamiliar surroundings and peering around with fresh eyes, looking for what I may have missed on earlier trips to the past, the past, that whole other country where they do things differently.

It is like the peace of walking into a great cathedral built by hands long since gone; an eloquent, inviting silence descends. I'm undecided where to look first, but I do know this much: This place is holy, made so by the sacrifice, suffering and devotion of another generation. For here is the great dividing point of American history, the rock from which we were formed.

On this one day of the year a columnist in invited to do what he's supposed to do every day: Raise the level of public discourse. The general has that effect on people in these latitudes. The mind comes to attention at his name.

Have you ever noticed? A couple of Southerners might be just passing the time, maybe in a petty political quarrel, when one mentions Robert E. Lee to make a point. Suddenly both are ashamed, made uncomfortable by the profanation. That name is not to be taken lightly, and it's certainly not to be used for political advantage.

The conversation halts, and a stillness sets in. Lee's is a name to conjure with, not exploit. In the end one does not defend or assail the general so much as commune with him, as on this perfect, rainy evening.

How many such evenings did Lee's great biographer, Douglas Southall Freeman, spend studying the old campaigns, following every attack and feint, determined to put together the definitive account of his fellow Virginian? He once tried to calculate how long he'd been at it, and came up with the best estimate he could: 6,100 hours spent writing more than a million words that would cover some 2,000 pages in four volumes. The bibliography alone took up 26 pages, and then there were the maps and appendices . . . . The years piled up.

Yet when it was all done, and the author could proudly inform his editor in New York, the great Maxwell Perkins, that he'd finally finished his master work, he felt as much sorrow as he did pride. For now he would have to leave the general's company. And he was loathe to part.

It may be hard at this distant point to rejoin the general and his times; it may be impossible to do so fully. But once absorbed in Lee, it is even harder to leave.

Lee's biographer did not intend to raise one more gaudy monument to the general's memory, but to write as balanced and dispassionate an account as a Virginian could - in the same stoic spirit as his subject. "I do not see any reason," he wrote Max Perkins, "why Lee should be presented as the idol of the South."

The author set out to get at the elusive truth within the flawless marble image of the man. "Reared in the South, I had listened all my life to the extravagances of rhetorical apostrophe on all that pertained to the Confederacy, and I had felt that we were actually lowering our Southern leaders in the eyes of thoughtful persons by attempting to exalt them into demigods. General Lee himself detested these absurdities of panegyric; I determined to write in his spirit, as I interpreted it, and not to permit myself a single laudatory adjective in describing him. He did not need them."

Douglas Southall Freeman went digging for as many tactical errors in the general's record as he could find or imagine - judgments that remain as richly debatable now as when he made them.

But beyond tactics, Lee's biographer concluded that his hero had one great failing - "a mistaken theory of the function of high command." Lee, he wrote, saw his role as getting his legendary Army of Northern Virginia into the most advantageous positions possible at the most advantageous time ("fustest with the mostest"), issuing the most flexible of orders, and then leaving the combat itself to his subordinates and their judgment.

It worked, but not always. Against a foe vastly superior in almost every respect - numbers, resources, mobility - his approach had to fail only once for it to fail decisively, as it did at Gettysburg.

But having said all that, the biographer who was going to devote not a single laudatory adjective to his subject could not help but note Lee's steady superiority in the field, victory after victory, and how he had inflicted half again as many casualties on the foe as his legendary Army of Northern Virginia had suffered. Despite his determination to remain objective, one more biographer of Lee the general had fallen under the sway of Lee the man. "Remember," he wrote, "that Lee was dignity, grace and courtesy personified without a touch of surliness."

It was the man's unbroken wholeness that captivated his biographer, as it does today. Robert E. Lee was a striking example of how a leader can tower over his cause.

In the end, it is not the victorious or the defeated Lee that speaks to us on a rainy night so long after his glories and failures. It is neither the Lee of Chancellorsville, that near-perfect victory, or his surrender at Appomattox that sums up the man and commander.

It is not even the compassionate Lee of Fredericksburg, who could look down from Marye's Heights at the trapped federals below, and say of the carnage he himself had engineered: "It is well that war is so terrible, or we should grow too fond of it."

It is not even the Lee of Gettysburg who speaks most to us in these ungenerous times when the first rule of a leader is never, never to admit error. He still astounds, the commanding general who could ride out to meet Pickett after the disastrous charge on the third day and say only: "All this has been my fault."

Generals with one eye on the next election and the other on how they will tell the story in their memoirs do not say such things. Lee did not blame Longstreet or the fates, and he was that rarity among Civil War commanders: He never wrote his memoirs.

In the end, what stays, and returns with greater power and endurance every Jan. 19, is the man who saw through victory as clearly as he did defeat, and recognized both as imposters. Despite his legend, the general could not command events - yet he remained in full command of his response to those events. Which is why not all the rains that have come and gone since his time have been able to wash out the single name that still sums up whatever is best in us and in this, our ever fecund, always forgiving South: