Why Tammy Faye Over Falwell? 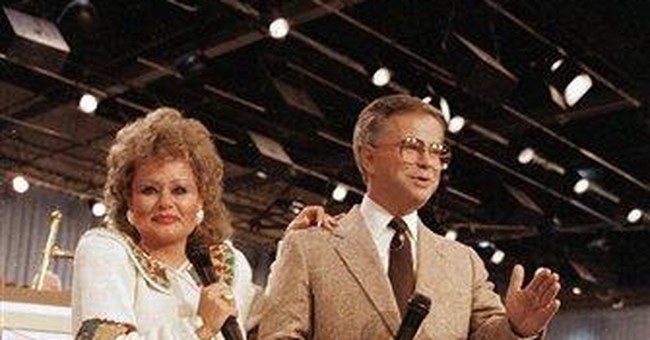 In life, Tammy Faye Bakker was made a laughing-stock by the mainstream media. Her overly mascara-ed face, her ditzy monologues, and her twangy, southern-style hymn singing were held up by the media as the prototypical evangelical: uneducated, backwoods—and living in la-la land.

Somehow though, post PTL and “The Jim and Tammy Show,” Tammy Faye managed to endear herself to that same mocking media. Upon news of her death (July 20) the Washington Post carried the headline, “From down here, she looks like an angel now.” MSNBC headlined, “Through it all, Tammy Faye never wavered.” Every major media outlet made sure you knew that Tammy Faye was “never seriously implicated” in any of the scandals that brought down her husband, though she herself continued to live a life of luxury until the day she died. CNN’s obituary included,

Tammy Faye Messner has also been known as one of the few evangelical Christians who had the support of the gay community. She was one of the first televangelists to reach out to those with AIDS when it was a little-known and much-feared disease. In return, she told King in July, “When I went—when we lost everything, it was the gay people that came to my rescue, and I will always love them for that.”

But the media reports of the death of the Rev. Jerry Falwell, the pioneer of televangelism in America, weren’t nearly so flattering. CNN in its obituary of Falwell characterized him as “a lightning rod for controversy.” MSNBC’s obituary somehow tied him to the PTL sex scandal and characterized him as a “leader of America’s anti-gay industry.” NPR focused exclusively on the controversial statements Falwell made about the September 11 attacks, homosexuality and the Antichrist as a Jewish male—all of which he had either retracted and apologized for or clarified. If the obituaries are any measure of the respect of the media for Jerry Falwell, it’s safe to assume it was either begrudging or none.

How Tammy Faye managed to endear herself to the mainstream media is no secret. She was a ubiquitous guest on Larry King Live and King became the major conduit for the re-imaged Tammy Faye post PTL. The American viewing public was frequently reminded that Tammy Faye Messner was not the same Tammy Faye Bakker of televangelism fame. She had changed, without losing her trademark make-up.

And thus her secret: she extended the love of God without demanding respect for God in return. Hers was a “gospel” of love, peace, unity and harmony—sans repentance. You could be anything and do anything and still be loved by the god of Tammy Faye.

Not so with Jerry Falwell. Falwell could put his arm around his nemesis Larry Flynt and tell him on national television that he loved him and God loved him—but that God required Flynt to repent. Tammy Faye put her arms around the gay community, never telling them the truth about their sin.

Why has the media treated Tammy Faye softly in death, while harshly condemning Jerry Falwell? Were they both not representatives of American evangelicalism? Maybe, but with one glaring difference: Falwell was bold to proclaim what the word of God demands of us. Tammy Faye’s so-called “gospel” claimed to offer great benefits and demanded nothing in return. It should be no surprise that she won the hearts of mainstream media in doing so.