Hillary's Faith Goes Only So Far 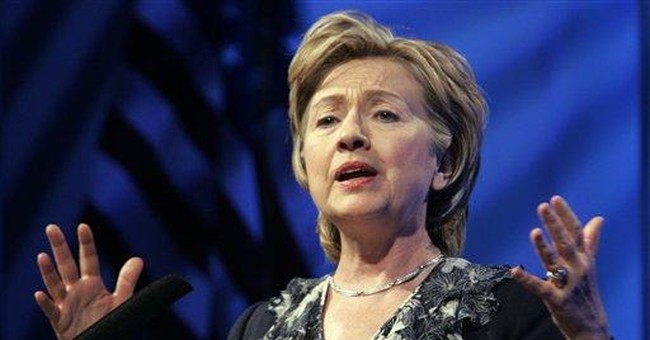 One of the most prolific writers on the subject of the Democratic Party and religion is Amy Sullivan, an editor with the Washington Monthly. TIME magazine recently posted two essays by Ms. Sullivan that are must-reads for evangelical Christians as we consider the faith of the Democratic presidential candidates. In one of the essays, a parsing of a recent TIME poll on the faith of the Republican and Democratic candidates, Ms. Sullivan sees a shift “in which it is the Democrats who are talking about faith while their Republican counterparts dodge the subject.” She is quick, however, to point out that while the reality may be changing, the perception of voters that a “religious Democrat” is an oxymoron still prevails.

Not that the Democrats aren’t working hard to overcome the electorate’s perception of them as ambivalent or even hostile toward religion. Howard Dean is challenging his party to reach out to evangelical Christians, even sitting for an interview with CBN where he stated that Democrats have much in common with evangelicals. Hillary Clinton recently sat for an extensive interview about her faith with the New York Times. And Barack Obama has made his conversion experience at a church on the south side of Chicago a staple of his stump speech.

On a recent broadcast of my radio program I spoke with Amy Sullivan about the faith of political candidates and the uphill climb the Democrats have to overcome the perception of their party as ambivalent or even hostile toward religious expression. In the interview I made the observation that while Democrats and Republicans may be reading from the same Bible, the lens they look through causes them to focus on different things: the Democrats are drawn to the social justice texts and the Republicans are drawn to the texts dealing with sanctity of life issues. I asked, Why can’t both parties see the whole picture? To which Sullivan responded:

You’ve put your finger on it. The candidate who, in the long run, is going to be most successful - which is to say that this may be just an unusual election cycle and may be tilted in Democrats’ favor for all sorts of different reasons - but in the long run candidates are going to need to find that middle ground, which is why I’m surprised that Hillary Clinton hasn’t been talking more about her efforts to reduce abortion rates, which she has been very active in the Senate over the last few years. And that’s one of those issues that acknowledges that people do have concerns about abortion.

Say that again? Hillary Clinton is working in the Senate to reduce abortion rates? Why isn’t Senator Clinton talking about this? If indeed it is true that the Senator is working to reduce abortion rates, could it be that Clinton is not anxious to make it known because she fears a backlash from the Democratic Party based on its abortion platform? And, of course, this backlash would betray the fact that the Democrats really aren’t as interested in reaching out to religious voters on sanctity of life issues as their interviews with the media might suggest.

This really is the key challenge for the (Democratic) Party. I believe some of the candidates are a little concerned running in the primary that they don’t want to be too outspoken about a different approach to abortion, and yet that’s exactly what the majority of Americans are telling them they want to hear. Most people believe that abortion should be legal, but they believe there should be fewer abortions. And so there has been a coalition of pro-choice and pro-life Catholic Democrats in the House of Representatives, and Hillary Clinton has been involved in the Senate, in efforts to reduce abortion rates both by preventing unwanted pregnancies, but also by providing resources to women who want to carry their pregnancies to term but often can’t.

It’s hard to take seriously the claim that Senator Clinton is working to reduce abortions. This is the same Hillary Clinton who basically stated that an America without abortion as an option would be the same as the totalitarian states of Romania and China:

When I defend my pro-choice position in the debate over abortion in our country, I frequently refer to Romania, where pregnancy could be monitored on behalf of the state, & to China, where it could be forcibly terminated. One reason I continue to oppose efforts to criminalize abortion is that I do not believe any government should have the power to dictate, through law or police action, a woman’s most personal decision.

[The Romanian dictatorship in the 1980s] banned birth control and abortion, insisting that women bear children for the sake of the state. Women told me how they had been carted from their workplace once a month to be examined by government doctors whose task was to make sure they weren’t using contraceptives or aborting pregnancies. I could not imagine a more humiliating experience.

In Romania and elsewhere, many children were born unwanted or into families that could not afford to care for them. They became wards of the state, warehoused in orphanages (Hillary Clinton, Living History, 354-5).

The facts are that Senator Clinton, at every opportunity, has voted in lock-step with the liberal Democratic Party on abortion. She opposed the ban on partial birth abortion and was against criminalizing harm to a fetus during an attack on the mother. While she has supported the funding of programs to reduce teen and other unwanted pregnancies, that funding was not for abstinence based educational programs, but for "family planning" programs that employ the use of contraceptives, at tax-payer expense.

If indeed Senator Clinton, as a devout Methodist, is morally opposed to abortion the courage of her convictions should prompt her to stand against the immorality of the Democratic Party platform on the issue of choice. But the Senator’s morality goes only so far. Her faith tells her that abortion is morally wrong. But her faith doesn’t seem to inform her morals on the issue of the behavior that produces the need for abortion in the first place. Which brings us full circle to my original point: Democrats read the Bible with the lens magnifying the social justice texts while seemingly blinded to the texts that call for upholding the sanctity of human life.

For there to be a real conversation on the faith of politicians and its influence on their candidacies there must first be agreement on the need to read and apply the whole Bible, not just the parts that fit our particular political ideology. It’s a lesson candidates from both parties need to master.