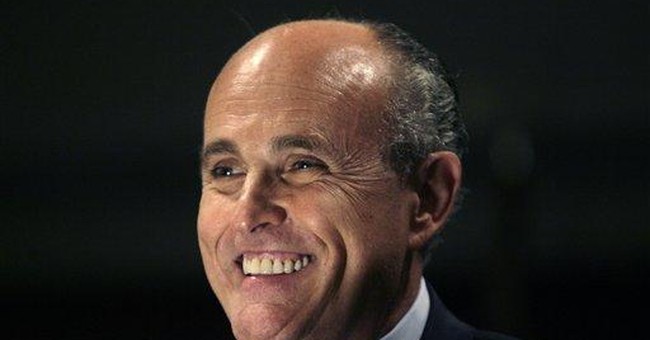 I’m a bit confused. Just a few weeks ago James Dobson, a leading voice among social conservatives, published a widely distributed op-ed in which he clearly stated his objections to a Giuliani candidacy: “I cannot, and will not, vote for Rudy Giuliani for president in 2008,” wrote Dr. Dobson. “It is an irrevocable decision.”

The day after Dobson’s op-ed was published the Christian Science Monitor ran an unrelated story under the headline: “Giuliani losing steam in ‘08 presidential race.” The piece cited a Pew Research Center survey which “…found that the biggest social issues, abortion and gay marriage, ranked at the bottom of a list of 19 issues that voters judged important. But within the core of the Republican electorate, these two issues are game changers.” While the nation as a whole seems ambivalent toward the morality of gay rights and abortion, social conservatives like James Dobson and the constituency he represents, are not.

Here’s where my confusion enters. David Paul Kuhn writing for The Politico on May 28 observes that Rudy Giuliani “…is so far winning the contest for the support of social conservatives.” Place your best impression of Tim Allen’s “Huh??” here. Under the headline, “Social conservatives bite bullet, back Rudy,” Mr. Kuhn suggests that a reading of recent polling data, specifically “analysis by the Pew Forum on Religion & Public Life,” would indicate that social conservatives are willing to allow their morality to take a back seat to Giuliani’s “electability.”

Is it really possible that social conservatives are willing to compromise their core convictions just to keep Hillary out of the White House in 2008? The Pew survey cited by Kuhn indicates that forty-four percent of social conservatives believe that Giuliani has “the best chance of becoming president in ’08.” But that’s not the same as saying they personally would support Giuliani. Kuhn twists a stat to make it say something it clearly does NOT say, namely that social conservatives are reversing course on their core convictions just to maintain the White House in ’08. Given Giuliani’s own lack of conviction on moral issues, as evidenced by his private affairs, and his stated positions on abortion and gay rights, a Giuliani victory in ‘08 cannot in any way be seen as maintaining the White House for conservatives.

Mr. Kuhn cites one poll to support his assertion, and parses it to suit his presupposition. For Mr. Kuhn to arrive at the conclusion that such a shift is occurring is to underestimate the moral conviction of true social conservatives. He should be paying attention to the larger picture being painted by Dr. Dobson, and Dr. Richard Land, the New Media, and talk radio hosts whose platforms shape the conscience of social conservatives.

Mr. Kuhn fails to realize a very important fact about social conservatives. Electing a president has never been a popularity contest for us. When it comes to electing our national leader we conservatives root ourselves firmly in the philosophy espoused by the Federalist Papers, and specifically the philosophy of Alexander Hamilton, when he said:

The process of election affords a moral certainty, that the office of President will never fall to the lot of any man who is not in an eminent degree endowed with the requisite qualifications. Talents for low intrigue, and the little arts of popularity, may alone suffice to elevate a man to the first honors in a single State; but it will require other talents, and a different kind of merit, to establish him in the esteem and confidence of the whole Union, or of so considerable a portion of it as would be necessary to make him a successful candidate for the distinguished office of President of the United States (Hamilton, Federalist #68).

The Founding Fathers never intended for the election of the president to be a popularity contest, a political version of American Idol. The Founders understood what we have forgotten: popularity is the least of the qualities which qualifies a man (or woman) to hold the place of highest esteem among his (or her) fellow citizens. Though popularity may propel a man to the office, only good character can sustain him there. Giuliani has one; he totally lacks the other. The fact that we may view Giuliani as having the best chance of being elected president is our indictment of the American electorate at-large, not an indication of our support for a candidate who has been made popular, and chosen for us, by the mainstream media.