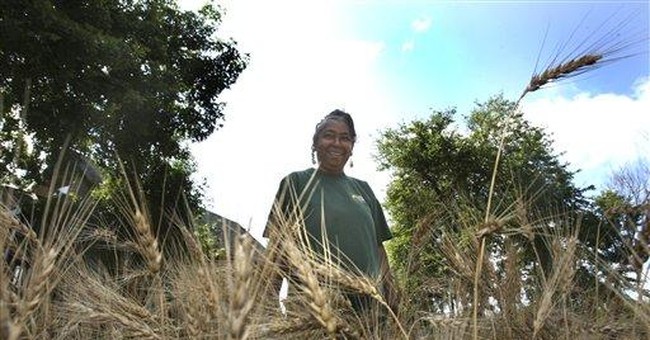 “Since when did you become a global warming alarmist?” I kidded Norman midway into our telephone conversation a few weeks before this amazing scientist and humanitarian died. “What are you talking about?” Dr. Borlaug retorted. “I’ve never believed that nonsense.”

I read him a couple sentences from his July 29 Wall Street Journal article. “Within the next four decades, the world’s farmers will have to double production … on a shrinking land base and in the face of environmental demands caused by climate change. Indeed, [a recent Oxfam study concludes] that the multiple effects of climate change might reverse 50 years of work to end poverty.”

I mentioned that my own discussions of those issues typically emphasize how agricultural biotechnology, modern farming practices and other technological advances will make it easier to adapt to any climate changes, warmer or colder, whether caused by humans or by the same natural forces that brought countless climate shifts throughout Earth’s history, including the Ice Ages, Dust Bowl and Little Ice Age.

“You’re right,” he said. “I should have been more careful. Next time, I’ll do that. And I’ll point out that the real disaster won’t be global warming. It’ll be global cooling, which would shorten growing seasons, and make entire regions less suitable for farming.”

I was amazed, as I was every time we talked. Here he was, 95 years old, “retired,” still writing articles for the Journal, and planning what he’d say in his next column.

The article we were discussing, “Farmers can feed the world,” noted Norman’s deep satisfaction that G-8 countries have pledged $20 billion to help poor farmers acquire better seeds and fertilizer. “For those of us who have spent our lives working in agriculture,” he said, “focusing on growing food versus giving it away is a giant step forward.”

Our previous conversations confirm that he would likewise have applauded the World Bank’s recent decision to subsidize new coal-fired power plants, to generate jobs and reduce poverty, by helping poor countries bring electricity to 1.5 billion people who still don’t have it. For many poor countries, a chief economist for the Bank observed, coal is the only option, and “it would be immoral at this stage to say, 'We want to have clean hands. Therefore we are not going to touch coal.’” Norman would have agreed.

As he argued in his WSJ article, “governments must make their decisions about access to new technologies … on the basis of science, and not to further political agendas.” That’s why he supported DDT to reduce malaria, biotechnology to fight hunger, and plentiful, reliable, affordable electricity to modernize China, India and other developing nations.

His humanitarian instincts and commitment to science and poverty eradication also drove his skepticism about catastrophic climate change. He was well aware that recent temperature data and observations of solar activity and sunspots indicate that the Earth could be entering a period of global cooling. He had a healthy distrust of climate models as a basis for energy and economic policy. And he knew most of Antarctica is gaining ice, and it would be simply impossible for Greenland or the South Pole region to melt under even the more extreme temperature projections from those questionable computer models.

He also commented that humans had adapted to climate changes in the past, and would continue to do so. They would also learn from those experiences, developing new technologies and practices that would serve humanity well into the future.

Norman’s dedication to science, keen powers of observation, dogged perseverance, and willingness to live for years with his family in Mexico, India and Pakistan resulted in the first Green Revolution. It revolutionized farming in many nations, saved countless lives, and converted Mexico and India from starving grain importers to self-sufficient exporters.

In his last years, he became a champion of biotechnology, as the foundation of a second Green Revolution, especially for small-holder farmers in remote parts of Africa. Paul Ehrlich and other environmentalists derided his ultimately successful attempt to defuse the Population Bomb through his initial agricultural advances, and attacked him for his commitment to biotechnology in later years.

His response to the latter assaults was typically blunt. “There are 6.6 billion people on the planet today. With organic farming, we could only feed 4 billion of them. Which 2 billion would volunteer to die?”

The Atlantic Monthly estimated that Norman’s work saved a billion lives. Leon Hesser titled his biography of Borlaug The Man Who Fed the World. Competitive Enterprise Institute senior fellow Greg Conko dubbed him a “modern Prometheus.” Science reporter Greg Easterbrook saluted him as the “forgotten benefactor of mankind.” And the magician-comedy-political team of Penn and Teller said he was “the greatest human being who ever lived.”

He deserved every award and accolade – and merited far more fame in the United States than he received, though he was well known in India, Mexico and Pakistan, where his work had made such a difference.

Norman was also a devoted family man and educator. He served as Distinguished Professor of International Agriculture at Texas A&M University into his nineties, combining research, teaching and overseas travel. A year and a half ago, he gladly spent 40 minutes on the telephone with my daughter, who interviewed him for a high school freshman English “true hero” paper – and did so just after returning from the hospital and on the one-year anniversary of his beloved wife Margaret’s death.

He told her, it was because of Margaret, “and her faith in me and what I was doing, that we were able to live in Mexico, under conditions that weren’t nearly as good as what we could have had in the United States, and I was able to do my work on wheat and other crops.”

I sent him occasional articles, and we talked every few months, about biotech, global warming, malaria eradication, some new scientific report one of us had seen, or some website he thought I should visit. As we wrapped up our early August chat, we promised to talk again soon. Sadly, he entered a hospice and passed away before that could happen.

His mind was “still as clear as ever,” his daughter Jeanie told me, but his body was giving out. To the very end, Norman was concerned about Africa and dedicated to the humanitarian and scientific principles that had guided his life and research, and earned him the 1970 Nobel Peace Prize.

Norman left us a remarkable legacy. But as he told my daughter, “There is no final answer. We have to keep doing research, if we are to keep growing more nutritious food for more people.”

The world, its climate and insect pathogens will continue to change. It is vital that we dedicate ourselves to continuing the incredible agricultural revolution that Norman Borlaug began.