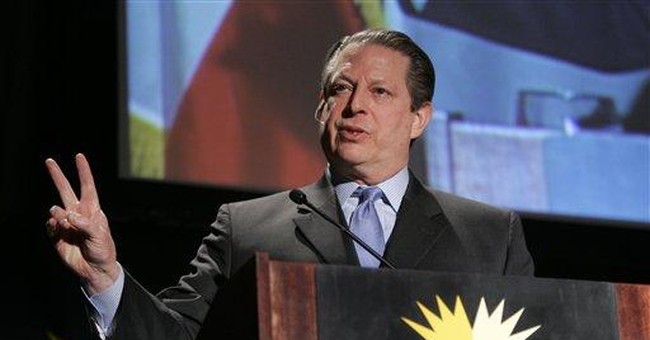 However, life-altering, economy-wrecking climate bills are no laughing matter. Nor do they represent corporate social responsibility. That’s why we need to recognize that the Kyoto Protocol and proposed “climate protection” laws will not stabilize the climate, even if CO2 is to blame.

It’s why we must acknowledge that money to be made, and power to be gained, from climate alarmism and symbolism is a major reason so many are getting on the climate “consensus” bandwagon.

Senate Inquisitors Olympia Snowe and Jay Rockefeller accused ExxonMobil of giving “more than $19 million since the late 1990s” to public policy institutes that promote climate holocaust “denial.” Their slanderous claims notwithstanding, this is less than half of what Pew Charitable Trusts and allied foundations contributed to the Pew Center on Climate Change alone over the same period. It’s a pittance compared to what US environmental groups spent propagating climate chaos hypotheses.

It amounts to 30 cents for every $1,000 that the US, EU and UN spent since 1993 (some $80 billion all together) on global warming catastrophe research. And it ignores the fact that the Exxon grants also supported malaria control, Third World economic development and many other efforts.

Aside from honest, if unfounded, fears of climate disasters, why might others support climate alarmism?

Scientists who use climate change to explain environmental changes improve their chances of getting research grants from foundations, corporations, and US government programs that budget $6.5 billion for global warming in 2007. They also increase the likelihood of getting headlines and quotes in news stories: “Climate change threatens extinction of rare frogs, scientists say.” Climate disaster skeptics face an uphill battle on grants, headlines and quotes.

Corporate actions that cause even one death are dealt with severely; but praise is heaped on federal mileage standards that cause hundreds of deaths, as cars are downsized and plasticized to save fuel and reduce emissions. High energy prices are denounced at congressional hearings, if due to market forces – but praised if imposed by government “to prevent climate change.” Drilling in the Arctic or off our coasts is condemned, even to create jobs, tax revenues and enhanced security; but subsidizing wind power to generate 2% of our electricity is lauded, even if it despoils millions of acres and kills millions of birds.

Environmental activists have turned climate fears into successful fund-raising tools – and a brilliant strategy for achieving their dream of controlling global resource use, technological change and economic development, through laws, treaties, regulations and pressure campaigns. Recent developments promise to supercharge these efforts.

Environmental Defense is collaborating with Morgan Stanley, to promote emission trading systems and other climate change initiatives – giving ED direct monetary and policy stakes in the banking, investment and political arenas, and in any carbon allowance or cap-and-trade programs Congress might enact. Other environmental groups, companies and Wall Street firms will no doubt follow.

ED designed and led the disingenuous campaign that persuaded many healthcare agencies to ban DDT, resulting in millions of deaths from malaria. Greenpeace, Sierra Club, Union of Concerned Scientists, ED and other groups still post deceitful claims about DDT on their websites, further delaying progress against this killer disease. By blaming climate change for malaria, they deflect criticism for their vile actions.

Climate catastrophe claims enable activists to gain official advisory status with companies and governments on environmental issues. They also make it “ethical” for Rainforest Action and other pressure groups to oppose power generation in Third World countries, where few have access to electricity – and thereby keep communities perpetually impoverished.

Meanwhile, Prince Charles gets lionized for appropriating 62 first class jetliner seats for his entourage of 20, on a trans-Atlantic trip to receive an environmental prize and lecture Americans on saving the Earth – because at least he didn’t use his private jet.

Companies in the CAP and EIC can develop and promote new product lines, using tax breaks, subsidies, legal mandates and regulatory provisions to gain competitive advantages. They get favorable coverage from the media, and kid-glove treatment from members of Congress who routinely pillory climate chaos skeptics.

Some worry that this could become a license to redefine corporate ethics, present self-interest as planet-saving altruism, and profit from questionable arrangements with environmental groups and Congress. Certainly, cap-and-trade rules will create valuable property rights and reward companies that reduce CO2 emissions, often by replacing old, inefficient, high-polluting plants that they want to retire anyway.

DuPont and BP will get money for biofuels, GE for its portfolio of climate protection equipment, ADM for ethanol, Lehman Brothers for emission trading and other deals. Environmental activists will be able to influence corporate, state and federal policy, and rake in still more cash. Insurance companies can blame global warming for rate increases and coverage denials.

Lobbying and deal-brokering will enter a new era. As Thenardier the innkeeper observed in Les Miserables, “When it comes to fixing prices, there are lots of tricks he knows. Jees, it’s just amazing how it grows.” Indeed, the opportunities to “game the system” will be limited only by one’s “eco-magination.”

To determine the losers, look in the mirror. Activists and politicians are creating a Frankenstein climate monster on steroids. Were it real, we’d need a wholesale dismantling of our economy and living standards to slay the monster. How else could we eliminate 80–90% of US and EU fossil fuel emissions by 2050, to stabilize carbon dioxide emissions and (theoretically) a climate that has always been anything but stable?

Think lifestyles circa 1900, or earlier. Ponder the British environment minister’s latest prescription: World War II rationing, no meat or cheese, no airport expansions, no veggies that aren’t grown locally. France wants a new government agency that would single out, police and penalize countries that “abuse the Earth.” Others propose to give Africans little solar panels for their huts, while their kleptocratic rulers get millions of dollars for trading away people’s right to generate electricity and emit CO2.

We should improve energy efficiency, reduce pollution, and develop new energy technologies. But when we demand immediate action to prevent exaggerated or imaginary crises, we stifle debate, railroad through programs that don’t work, and impose horrendous unintended consequences on countless families. That is shortsighted and immoral.