Paul C. Broun, Jr. grew up in Athens, Georgia where he attended Athens High School and graduated from the University of Georgia in 1967 with a B.S. in Chemistry. In 1971, he received his Medical Doctor degree from the Medical College of Georgia in Augusta. An internship at Good Samaritan Hospital in Portland, Oregon and a residency at University Hospital in Birmingham, Alabama followed.

Paul served in the military as a jet engine mechanic in the U. S. Marine Corps Reserves and later received a commission as a medical officer in the U. S. Navy.

For most of his career, Dr. Broun has practiced general medicine and, in 2002, he went out on his own, establishing a unique practice of full-time house calls. He has enjoyed the freedom of practicing medicine without bureaucratic encumbrances and his patients appreciated the convenience of being seen at home or at work.

Paul’s first exposure to politics came at the age of sixteen, when his father won a seat in the Georgia State Senate. Paul Broun Sr. represented the Athens area as a State Senator for 38 years. Later, Paul Jr. himself would become involved politically; first as a volunteer lobbyist for Safari Club International, a pro-hunting and conservation organization, then as a conservative Republican United States Representative.

Paul Broun participates in many diverse organizations and activities ranging from politics and religion to cooking and sports. Some of these are: the NRA, Gideons International, Rotary International, Trout Unlimited, Gun Owners of America and University of Georgia President’s Club. He was the founding President of the Georgia Republican Assembly, and President of the Georgia Sport Shooting Association (the NRA state affiliate). Paul is an avid outdoorsman, having a passion for conservation, hunting, fishing, and Second Amendment rights.

Dr. Broun has been married to his wife Niki since 1985 and has two grown daughters, a teen-aged son and two grandchildren. The Brouns are members of Prince Avenue Baptist Church in Athens, where Paul is a former AWANA children’s ministry leader. He is active in the Gideon ministry and in 2004 participated in a mission trip to Iraq.

As the 111th Congress moves forward, look for Dr. Broun to lead the charge for fiscal responsibility as he works to cut wasteful government spending and put more dollars back in the pockets of taxpayers. 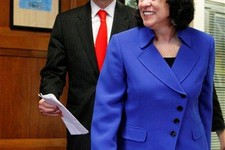