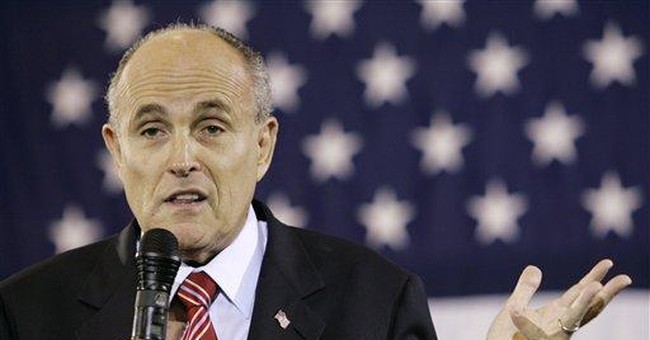 Today, the Club for Growth released its fourth presidential white paper on former New York City Mayor Rudy Giuliani’s economic record. These white papers are extensively researched and seek to provide readers with a thorough analysis of the candidates’ economic records during their time in public office.

Over the past couple of months, critics and supporters alike have cherry-picked one or two issues out of Rudy Giuliani’s extensive record to bolster their pro or con stance.

However, any exploration of a candidate’s record must take into account the larger picture and the unique context in which that record is achieved. In New York City, Rudy Giuliani governed a locality dominated by liberal Democrats; public-sector labor unions; social-welfare activists; and a powerful local news media actively hostile to a limited-government philosophy. In the face of such tremendous headwind, Giuliani’s economic accomplishments are remarkable.

Elected in 1993, on the heels of the largest annual tax increase in the city’s history, Giuliani inherited a city crippled by high taxes, ballooning deficits, and stalled job growth. Despite these obstacles, Mayor Giuliani wasted no time in calling for $1 billion in tax cuts over the next four years, slashing city jobs, and cutting city-funded spending in real terms by more than $340 million. Over the rest of his eight years at Gotham’s helm, Giuliani reduced a slew of other taxes and kept spending at an all-time low.

Giuliani is often criticized for large spending increases during the surplus years, but it is instructive to compare his spending record with that of his predecessors and successor. Over the 1980’s, city spending increased by an average of 7.11 percent, while 1991-1994 saw an average spending increase of 4.68 percent. In contrast, city spending during Giuliani’s eight years increased just barely, by an average of 2.84 percent — a remarkable number given the 2.9 percent population-plus-inflation benchmark. In addition, city spending as a percentage of GCP (gross city product) decreased from 10.9 percent to 9.3 percent — meaning, the size of government as a percentage of the economy actually decreased under Giuliani’s tenure. Mayor Giuliani’s relative spending restraint is all the more impressive compared with the 10.01 percent average increase in spending under Mayor Bloomberg’s first term.

On both taxes and spending, Giuliani certainly deserves criticism for isolated indiscretions. During the surplus years, Giuliani loosened the purse strings, and much like his predecessor, David Dinkins, he continued to lavish corporate welfare on pet companies and projects, including his precious baseball stadiums. Giuliani opposed the federal line-item veto after Clinton vetoed a line-item forgiving New York State’s Medicaid debt, and opposed a number of tax cuts over his eight years.

Giuliani demonstrated the same steely resolve and free-market mindset when it came to taking on New York City’s welfare rolls and overbloated bureaucracy, and fighting for school choice.

While Giuliani opposed federal welfare reform — even suing the government over the matter — his opposition did not stem from a philosophical disagreement, but from the burdens the legislation placed on local governments already in the process of implementing welfare. In fact, welfare recipients under Giuliani’s administration dropped from 1.1 million in 1994 to under 500,000 in 2001 — the lowest level in 35 years and a drop of more than 50 percent. This accomplishment marked the first time since July 1966 that New York City had less than 500,000 people on public assistance.

When it came to removing government’s heavy handprint from the private sector, Giuliani was just as merciless, privatizing many elements of New York City’s bulky bureaucracy. From maintenance of the city parks, to water meter reading, to the city’s homeless shelters, Giuliani relegated these responsibilities and many others to private sector companies. He sold many entities he felt the city had no business owning — why in the world did New York City own off-track betting facilities? — and turned over thousands of city-owned properties to private owners and developers

And though Giuliani began his mayoral career opposed to school choice, he soon became a passionate advocate for competition in the education market. Though he was ultimately unsuccessful in forcing even a pilot school vouchers program on his liberal city council and education board, he certainly deserves credit for trying.

To be sure, this lengthy list of accomplishments is stained by a much smaller list of anti-growth positions. Giuliani has long been a supporter of McCain-Feingold, and refused to reconsider his support as recently as December of 2006 in an interview with radio host Dennis Prager. He was a firm opponent of NAFTA in 1993, claiming the trade deal would prove harmful to New York City jobs, a strange position given New York City’s status as the financial capital of the country, if not the world. He strenuously opposed any attempt to weaken rent control in New York City despite its proven distortion on the marketplace — a position he probably took because of its popularity among his constituents. Though little is known about his stance on the 2003 Medicare prescription-drug plan, he voiced support for the new government program in April of 2006.

On other issues, Rudy Giuliani’s positions are simply unknown, a result of the local nature of his job. Giuliani has made vague reference to his support for personal Social Security accounts and his support for free trade, but has yet to elaborate on how these two issues fit into his overall philosophy or what he would do about them if he were to win the presidency. His record on tort reform as mayor is mixed. Would he seek to limit frivolous lawsuits as president, despite his suit again the gun industry as mayor? Would he seek to impose further restrictions on free speech, or would he veto further restrictions if they came across his desk?

These are important questions and criticisms. Over the coming months, Rudy Giuliani will have to address these issues, elaborate on the unknowns, and explain, even reconsider, some of his most egregious positions. These indiscretions though, are modest in scale compared to his accomplishments.

Despite powerful local obstacles, Giuliani was able to significantly cut taxes; hold spending increases down below the rates of inflation and population growth; overhaul the welfare system; deregulate and privatize many local government services; and join the fight for school choice. These accomplishments played a crucial role in transforming New York City from an economic basket case into a thriving economy.

The most important question is what Giuliani’s mayoral tenure tells us about how he would govern if elected president. The answer is not clear cut, as some of his local positions are worrisome and some of his federal positions are still unknown. Nonetheless, one cannot help but conclude that if Giuliani could accomplish the pro-growth record he did in the hostile environment of New York City, the potential for him to accomplish even more amid the more politically balanced federal government is great.