Shhhh... The Surge is Working 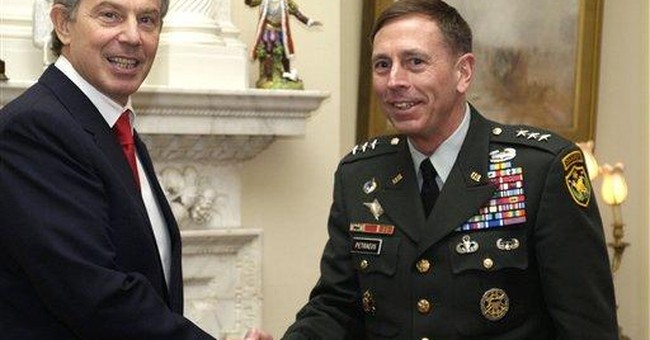 A gloomy haze has settled over the nation's prosecution of the War on Terror as of late. It seems like we can only watch helplessly as Nancy Pelosi and Jack Murtha size up new angles of attack for undermining the war effort. The media is chomping at the bit the tell the story of an America, bruised and humbled and exhausted, heading for the exits in Iraq.

But something interesting is happening on the way to the "new direction." Early indications are that the troop surge into Baghdad is working. It hasn't been reported on widely, but murders in Baghdad are down 70%, attacks are down 80%, Mahdi Army chief Moqtada al-Sadr has reportedly made off for Iran, and many Baghdadis who had fled the violence now feel it's safe enough to return. The strategy that Congress is busy denouncing is proving to be our best hope for victory.

In Iraq, there's a sense that change is in the air -- literally. Omar of Iraq the Model spots a B-1 Bomber in the skies of Baghdad for the first time since the end of the major combat. On the ground, Omar writes that the signs that Iraqis are getting serious about security are more palbable. With the help of Compstat-like technology, security forces are cracking down at checkpoints (even ambulances are getting stopped) and getting nimbler about locating them strategically so the terrorists don't know what to expect.

This turnaround in Baghdad is confirmed at home by the media's near-deafening silence. If it seems like you've heard less about how Iraq is spiraling into civil war in the weeks since the surge was announced, this is why. Even some discordant voices in the media are starting to wonder what's happening. Time magazine worries that it's "Quiet in Baghdad. Too quiet." That's right -- a dramatic reduction in violence is actually bad news.

It's too early to claim victory just yet; the operation is just two weeks old. But U.S. troops have been able to accomplish all of this with just one more brigade in-country, with four more on the way by May. These encouraging early returns show the potential for success when we apply concentrated military force to the security problem. When the Army and Marine Corps are on offense, carrying out combat operations and clearing out insurgent strongholds, we win. When we lay back, carrying out routine patrols and playing Baghdad beat cop, we lose.

The key to success is staying power. The always incisive Daffyd ab-Hugh has a good read on this dynamic. Counterinsurgency in Iraq has often been compared to a game of whack-a-mole -- secure an area, only to have the insurgents pop up somewhere else. But if we slammed a mallet into the hole, and kept it there, then picked up a new one... and did the same?

This is a new game called Seal-a-Hole , and it has a very different dynamic from Whack-a-Mole: the normal game is one of futility; the game continues until the player gets tired and quits or he runs out of money. But Seal-a-Hole actually has a victory point: when all the holes are sealed, the game is over -- and the player, America, has won.

Even though Seal-a-Hole is not futile, it nevertheless requires a great deal of patience; there are many, many holes, and each hole has a mole who must be whacked. Some of the holes, such as Sadr City, are very big and will require many mallets to properly seal. But if we have the courage and fortitude of our American forebears, we will seal those holes... and we will win.

On the political front, the White House also seems to have dislodged a major roadblock to victory: Prime Minister Nouri al-Maliki's reluctance to allow U.S. troops to take the fight to Sadr and his militias. Returning American troops have expressed their frustration at having to walk on eggshells when it came to came to entering Shi'ite areas, a backbone of support for the government. Thankfully, the rules of engagement are changing. American troops are now freer to take on all comers, and the results are clear in both Sunni and Shi'ite areas.

In the coming days and weeks, these rules of engagement will face their ultimate test with the decision to enter Sadr City, the Mahdi Army's key stronghold. And enter we must. Those intent on turning Iraq into a breeding ground for al-Qaeda won't be convinced of our seriousness until we confront the key sources of violence on both sides of the sectarian divide.

When things don't go well in Iraq, we see the endless B-roll of chaos and carnage. When things are on the upswing, we tend to hear more about Anna Nicole Smith. The media will never acknowledge victories in Iraq, so we'll have to settle for an absence of bad coverage. But even in this relative lull in Iraq, it's important to understand and appreciate the short-term victories so we can create more of them. And finish the job.