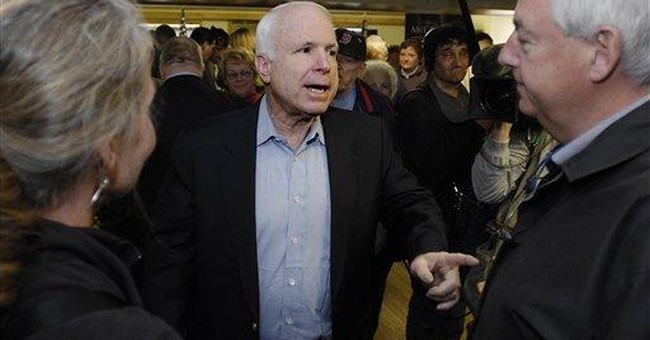 Of course, TIME magazine could be wrong. The venerable publication hasn't been the most accurate barometer of conservative attitudes and fortunes. It may just be the case that in 2006 we lost an election, which was bound to happen after twelve years of uninterrupted electoral success. It may just be that we momentarily lost our way on matters of fiscal discipline and clean governance and the voters punished us accordingly. It may just be that we are, as I write this, positioned for a comeback.

I will concede things look grim. Consider the picture painted by Jonathan Martin and Mike Allen and Jim VandeHei of the Politico this week. According to these three respected observers of the national political scene:

Republicans across the country are warning that increasing public discontent toward President Bush, the Iraq war and the GOP brand in general threatens to send the party's 2008 campaign planning into a tailspin.

Already, the problems are having tangible effects. Some of the party's top recruits in key races from Colorado to Florida are refusing to run for Congress. Business executives -- the financial backbone of the GOP -- are sending more and more money to Democrats. Overall Republican fundraising is down sharply from the same time frame during the past two presidential elections.

Then there are the voters.

Polling data released this month confirm what GOP officials are picking up anecdotally: Swing voters are swinging away from Republicans at high velocity. Most alarming to GOP strategists is a new survey by the nonpartisan Pew Research Center that found 50 percent of those interviewed consider themselves a Democrat or leaning that way; only 35 percent tilt Republican.

Worse yet, we've got Iraq to worry about. Lord knows very few of our Democratic friends are of the mind to offer any constructive criticism or helpful ideas. If there's a path to victory in there, it's up to us. And let's be honest with ourselves: This is an uphill fight. The war is far from won and it's unpopular at home.

As Jay Carney asks in the first sentence of his write-up on the new TIME Magazine poll, "[c]ould things be any worse for George W. Bush and his beleaguered party?"

And so here I come to cheer you up. For all is not lost.

The shocking thing about that TIME Magazine poll is that the two leading Republican presidential candidates—Sen. John McCain and Mayor Rudy Giuliani—defeat the two leading Democratic candidates—Sen. Hillary Clinton and Sen. Barack Obama—in hypothetical match-ups. As Carney writes, "[i]n our poll, Hillary Clinton loses to John McCain, 42%-48%, and to Rudy Giuliani 41%-50%. Even though Clinton maintains a 7% edge over Obama among Democratic respondents, Obama fares better in the general election matchups. It's so close that it's a statistical dead heat, but Obama still loses: 43%-45% to McCain, 44%-45% to Giuliani."

Let me bottom line this for you: Two pro-victory Republican candidates for president who have relatively close ties to the Bush administration (though, to be fair, each is distant from the Bushies in his own way) would defeat two defeatist Bush-haters if the election were held today.

But Rudy and Johnny Mac are hardly the right wing's idea of a dream team, you say. Perhaps so. Mayor Giuliani is famously out-of-step with social conservatives, but he has recently attempted to tack rightward in this regard and he had a heck of a week on the fiscal conservative side of the ledger. Let us just say that at the very least America's Mayor is right-of-center on a sufficient number of issues to qualify easily as a "Republican in Good Standing."

As for my candidate (and client) John McCain? Yeah, yeah; I know he's a "maverick" and all, but he is a right-of-center maverick, whose credibility on issues of national security is a powerful asset to the war effort. What is more, once he got out of Washington, his campaign took on a second lifethat cannot be replicated by any other Republican candidate at this time.

A close friend of mine in the conservative blogosphere says, "unless Reagan's corpse enters the race, I don’t know what I'm going to do." This is the kind of frustration TIME magazine is playing into. But I think it is misplaced. If you are a right-of-center Republican who supports victory in Iraq, you should be delighted about the GOP's prospects for 2008.