A Conspiracy So Vast 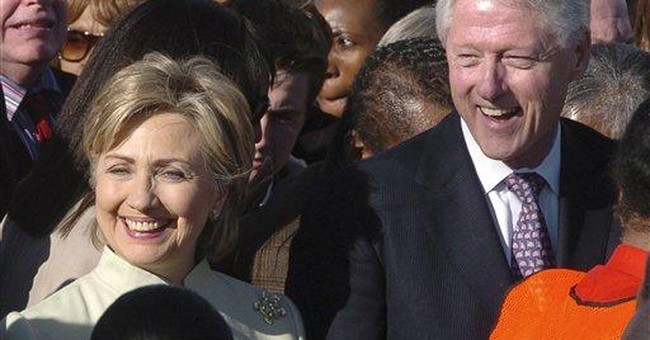 "You know, the Republicans did make a little bit out about the fact that I said there was a vast rightwing conspiracy," she said. "Well now we have three lawyers who have actually proven it in court. And I find that extremely reassuring and helpful.”

You will recall Clinton gained punch line immortality when she appeared on the Today show in 1998 and claimed the Monica Lewinsky scandal was merely another example of a “vast rightwing conspiracy” attempting to bring down her husband’s administration.

The conspiracy of which she spoke in Nashua was very real, of course. Clinton was applauding the efforts of three Democratic lawyers who pursued the notorious New Hampshire “phone jamming” scandal of 2002. On Election Day that year Republican conspirators jammed Democratic phone lines intended for Get Out The Vote activity by having a telemarketer “jam” the lines with repeated hang-up calls. Again, this conspiracy was very real: Two Republican operatives have served prison time for it and a third has been convicted.

But the phone jamming conspiracy had nothing whatever to do with Sen. Clinton or her husband’s affair and subsequent legal problems. Clinton was out of office by 2002 and none of the players are the same (which, I understand, is a fundamental element of a conspiracy). Moreover, this seems like a strange message to deliver to a public that—I can only imagine—is in no way desirous of reliving the Clinton-era unpleasantness, regardless of how tired they are of the current president.

Nevertheless, by Tuesday, —Clinton had repeated her “vast rightwing conspiracy” line in Washington.! Drudge put it up. By Tuesday evening, Drudge had also linked to —the video of Clinton talking about the conspiracy.!(Disclosure: I shot the video). Now, irrespective of whether this was Sen. Clinton’s intent, the “vast rightwing conspiracy” of 1998 and all it sought to reveal is on the table and worth chewing over again, if you have the stomach for it.

This is a fortuitous turn of events for R. Emmett Tyrrell Jr., founder and editor of The American Spectator and one of the granddaddies of all vast rightwing conspirators. Tyrrell has just authored a book titled, —The Clinton Crack-Up: The Boy President’s Life after the White House.! The book is mostly about Clinton’s emotional despair in his post-White House life. Existence might be a better word than life, though. For Tyrrell paints the picture of an exceedingly mopey former president lumbering through his political afterlife, unable to cope with his newfound irrelevance.

In his characteristically comic tone, Tyrrell recounts all those Clinton dust-ups, of which Tyrrell himself was a regular combatant: Troopergate, Pardongate, Whitewater, Chinese fundraising, allegations of spousal abuse (she on him), Monica Lewinsky (of course), and so many more.

Early on in the book Tyrrell reminds us that the “vast rightwing conspiracy” was not just a cheap applause line back in the 1990’s as it is today; it was the subject of some very real paranoia in the White House. Tyrrell writes:

“According to Clinton, his presidency suffered its scandals because of a synergy between the Right and the mainstream press. The Right fabricated stories of scandal, and the mainstream press dutifully passed them on. This explanation was first tried out on the public in 1994 when Clinton’s political advisor, James Carville, described the occult process as a “Media Food Chain.” By 1997 White House staffers had composed, presumably at taxpayers’ expense, a 331-page report on the Food Chain. Titled “Communication Stream of Conspiracy Commerce,” it depicted the flow of these shocking fabrications, advancing from their point of origin on the Right and heading into the mainstream press. The Right’s sources were identified: London’s Sunday Telegraph, Richard Scaife’s Pittsburgh Tribune-Review, the Wall Street Journal, the Washington Times, and The American Spectator. In an early post-presidential interview Clinton explained to Newsweek magazine, “We live in an historical period when the fanaticism of America is on the right, and it has an apparatus to support it.” For all his public smiles Clinton is an angry man; and throughout his retirement he has frequently given vent to his anger, often at odd moments.”

It seems an odd thing for Hillary Clinton to want to return to those days of White House paranoia. I can’t imagine she harbors fond memories of late nights and stomach butterflies wondering what the truth was—never knowing—and resolving to blame her husband’s “enemies” for his many foibles and pratfalls.

And yet there may be political capital in all this “vast rightwing conspiracy” talk. Democratic activists, particularly those who spend a great deal of time on the Internet, are in a paranoid and agitated state of mind these days. They pressured Democratic presidential candidates last week to boycott a planned debate because Fox News Channel was one of the sponsors, for example. Perhaps they will see Hillary Clinton as a kindred spirit.