Is Putin One of Us? 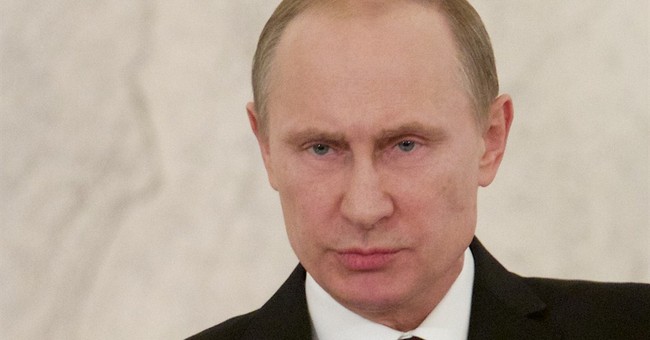 Is Vladimir Putin a paleoconservative?

In the culture war for mankind's future, is he one of us?

While such a question may be blasphemous in Western circles, consider the content of the Russian president's state of the nation address.

With America clearly in mind, Putin declared, "In many countries today, moral and ethical norms are being reconsidered."

Translation: While privacy and freedom of thought, religion and speech are cherished rights, to equate traditional marriage and same-sex marriage is to equate good with evil.

No moral confusion here, this is moral clarity, agree or disagree.

President Reagan once called the old Soviet Empire "the focus of evil in the modern world." President Putin is implying that Barack Obama's America may deserve the title in the 21st century.

Nor is he without an argument when we reflect on America's embrace of abortion on demand, homosexual marriage, pornography, promiscuity, and the whole panoply of Hollywood values.

Our grandparents would not recognize the America in which we live.

Moreover, Putin asserts, the new immorality has been imposed undemocratically.

The "destruction of traditional values" in these countries, he said, comes "from the top" and is "inherently undemocratic because it is based on abstract ideas and runs counter to the will of the majority of people."

Does he not have a point?

Unelected justices declared abortion and homosexual acts to be constitutionally protected rights. Judges have been the driving force behind the imposition of same-sex marriage. Attorney General Eric Holder refused to enforce the Defense of Marriage Act.

America was de-Christianized in the second half of the 20th century by court orders, over the vehement objections of a huge majority of a country that was overwhelmingly Christian.

And same-sex marriage is indeed an "abstract" idea unrooted in the history or tradition of the West. Where did it come from?

Peoples all over the world, claims Putin, are supporting Russia's "defense of traditional values" against a "so-called tolerance" that is "genderless and infertile."

While his stance as a defender of traditional values has drawn the mockery of Western media and cultural elites, Putin is not wrong in saying that he can speak for much of mankind.

Same-sex marriage is supported by America's young, but most states still resist it, with black pastors visible in the vanguard of the counterrevolution. In France, a million people took to the streets of Paris to denounce the Socialists' imposition of homosexual marriage.

Only 15 nations out of more than 190 have recognized it.

In India, the world's largest democracy, the Supreme Court has struck down a lower court ruling that made same-sex marriage a right. And the parliament in this socially conservative nation of more than a billion people is unlikely soon to reverse the high court.

In the four dozen nations that are predominantly Muslim, which make up a fourth of the U.N. General Assembly and a fifth of mankind, same-sex marriage is not even on the table. And Pope Francis has reaffirmed Catholic doctrine on the issue for over a billion Catholics.

While much of American and Western media dismiss him as an authoritarian and reactionary, a throwback, Putin may be seeing the future with more clarity than Americans still caught up in a Cold War paradigm.

As the decisive struggle in the second half of the 20th century was vertical, East vs. West, the 21st century struggle may be horizontal, with conservatives and traditionalists in every country arrayed against the militant secularism of a multicultural and transnational elite.

And though America's elite may be found at the epicenter of anti-conservatism and anti-traditionalism, the American people have never been more alienated or more divided culturally, socially and morally.

We are two countries now.

Putin says his mother had him secretly baptized as a baby and professes to be a Christian. And what he is talking about here is ambitious, even audacious.

He is seeking to redefine the "Us vs. Them" world conflict of the future as one in which conservatives, traditionalists and nationalists of all continents and countries stand up against the cultural and ideological imperialism of what he sees as a decadent west.

"We do not infringe on anyone's interests," said Putin, "or try to teach anyone how to live." The adversary he has identified is not the America we grew up in, but the America we live in, which Putin sees as pagan and wildly progressive.

Without naming any country, Putin attacked "attempts to enforce more progressive development models" on other nations, which have led to "decline, barbarity and big blood," a straight shot at the U.S. interventions in Afghanistan, Iraq, Libya and Egypt.

In his speech, Putin cited Russian philosopher Nicholas Berdyaev whom Solzhenitsyn had hailed for his courage in defying his Bolshevik inquisitors. Though no household word, Berdyaev is favorably known at the Russell Kirk Center for Cultural Renewal.

Which raises this question: Who is writing Putin's stuff?