Is the Superpower Afraid of Iran? 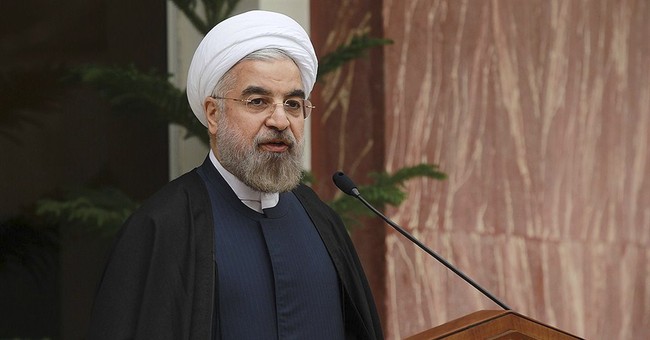 Since the news broke Saturday night that Iran had agreed to a six-month freeze on its nuclear program, we are back in the Sudetenland again.

Why? For not only was this modest deal agreed to by the United States, but also by our NATO allies Germany, Britain and France.

Russia and China are fine with it.

Iran's rivals, Turkey and Egypt, are calling it a good deal. Saudi Arabia says it "could be a first step toward a comprehensive solution for Iran's nuclear program."

Qatar calls it "an important step toward safeguarding peace and stability in the region." Bahrain, Kuwait and the United Arab Emirates have issued similar statements.

Israeli President Shimon Peres calls the deal satisfactory. Former Military Intelligence Chief Amos Yadlin has remarked of the hysteria in some Israeli circles, "From the reactions this morning, I might have thought Iran had gotten permission to build a bomb."

But this is not transparent nonsense?

In return for a modest lifting of sanctions, Tehran has agreed to halt work on the heavy water reactor it is building at Arak, to halt production of 20-percent uranium, to dilute half of its existing stockpile, and to allow more inspections.

Does this really make the world "a much more dangerous place"?

Consider the worst-case scenario we hear from our politicians and pundits -- that Iran is cleverly scheming to get the U.S. and U.N. sanctions lifted, and, then, she will make a "mad dash" for the bomb.

But how exactly would Tehran go about this?

If Iran suddenly moved all its low-enriched uranium, to be further enriched in a crash effort to 90 percent, i.e., bomb grade, this would take months to accomplish.

Yet, we would be altered within hours that the uranium was being moved.

Any such Iranian action would expose Barack Obama and John Kerry as dupes. They would be discredited and the howls from Tel Aviv and Capitol Hill for air and missile strikes on Natanz, Fordo and Arak would become irresistible. Obama and Kerry would be forced to act.

War with Iran, which would mean a shattered Iran, would be a real possibility. At the least, Iran, like North Korea, would be sanctioned anew, isolated and made a pariah state.

Should Iran test a nuclear device, Saudi Arabia would acquire bombs from Pakistan. Turkey and Egypt might start their own nuclear weapons programs. Israel would put its nuclear arsenal or high alert.

If, after a year or two building a bomb, in an act of insanity, Iran found a way to deliver it to Israel or a U.S. facility in the Middle East, Iran would be inviting the fate of Imperial Japan in 1945.

So, let us assume another scenario, that the Iranians are not crazed fanatics but rational actors looking out for what is best for their country.

If Iran has no atom bomb program, as the Ayatollah attests, President Hassan Rouhani says he is willing to demonstrate, and 16 U.S. intelligence agencies concluded six years ago and again two years ago, consider the future that might open to Iran -- if the Iranians are simply willing and able to prove this to the world's satisfaction.

First, a steady lifting of sanctions. Second, an end to Iran's isolation and a return to the global economy. Third, a wave of Western investment for Iran's oil and gas industry, producing prosperity and easing political pressure on the regime.

Fourth, eventual emergence of Iran, the most populous nation in the Gulf with 85 million citizens, as the dominant power in the Gulf, just as China, after dispensing with the world Communist revolution, became dominant in Asia

Why would an Iran, with this prospect before it, risk the wrath of the world and a war with the United States to acquire a bomb whose use would assure the country's annihilation?

America's goals: We do not want a nuclear Iran, and we do not want war with Iran. And Iran's actions seem to indicate that building an atom bomb is not the animating goal of the Ayatollah, as some Americans insist.

Though she has the ability to build a bomb, Iran has neither conducted a nuclear test, nor produced bomb-grade uranium. She has kept her supply of 20-percent uranium below what is needed to be further enriched for even a single bomb test. Now, she has agreed to dilute half of that and produce no more.

If Iran were hell-bent on a bomb, why has she not produced a bomb?

Just possibly, because Iran doesn't want the bomb. And if that is so, why not a deal to end these decades of sterile hostility?