Memo to Merkel: Tell Obama to Take a Hike 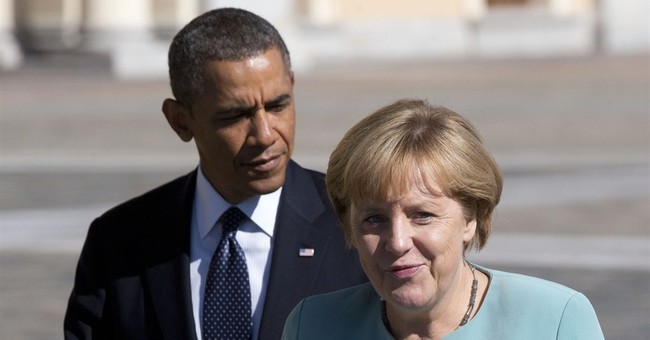 Chutzpah. I believe that's the word for it.

Just days after learning the Americans have been tapping her phones and taping her conversations, Angela Merkel has been publicly upbraided by the U.S. Treasury for being a bad global citizen.

What did she do to deserve this?

Merkel just won a third term as chancellor with a record vote and has an approval rating near 80 percent. But she is a bad global citizen because Germany is running the world's largest trade surplus.

The Washington Post thinks the Treasury's tongue-lashing is overdue, as does Paul Krugman of the New York Times:

"In this environment, a country that runs a trade surplus is ... beggaring its neighbors. It is diverting spending away from their goods and services to its own, and thereby taking away jobs."

Is this not astonishing?

Competing successfully in world markets is now tantamount to stealing food off the table of one's less-competent and less-successful neighbors.

By this standard, America was a selfish nation and a rotten global citizen for the first seven decades of the 20th century, when we ran trade surpluses every year, averaging 4 percent of GDP.

From the Civil War through the Roaring '20s, with a high tariff, we became the mightiest manufacturing power the world had ever seen. Our economic independence enabled us to stay out of two world wars. And when we did go in, we won within months in 1918, and we won again only a few years after Pearl Harbor.

Is this a record to be ashamed of?

Every modern nation that has risen to world power has done so through economic nationalism: Britain under the Acts of Navigation; the United States under protectionist Republicans from 1860-1914; Bismarck's Germany; postwar Japan, which rose from the ashes of 1945 to become the world's second economy; and China from 1980 to today.

Trade surpluses, run at the expense of rival powers, have been the hallmark of great nations in their rise to preeminence.

Though Germany is smaller than Montana, with a population not a fourth that of the United States, she is the powerhouse of the European Union, makes some of the finest products on earth, and sells abroad one-third of all she produces. Her unemployment rate is only 5 percent.

Why is that not a record to be admired? And whom are the Germans supposed to emulate? Answer, if you can believe it, Obama's America.

The Post and Krugman feel the Germans must shake off their habit of working and saving and start spending to get Club Med countries like Spain and Greece out of intensive care. The Post wants Merkel to embrace the Social Democrats' idea of raising the minimum wage to $11.50 an hour, which was too rich even for the mayor of D.C.

The need, says Treasury, is for "rebalancing."

Basically, what the globalists want is for prudent counties with trade surpluses to start running deficits to get money flowing, like transfusions, into the moribund economies.

But is this true? From their behavior in recent decades, neither the Chinese nor Japanese nor Germans, proprietors of the second, third and fourth largest economies on earth, buy into this ideology.

And how has America's conversion to globalism, since George H.W. Bush proclaimed the coming of the New World Order, worked out for us?

Bill Clinton, who enlisted the Republican establishment to help ratify NAFTA and U.S. membership in a World Trade Organization where the United States has the same vote as Armenia, ran $1.8 trillion in trade deficits.

Clinton's deficits were then dwarfed by George W. Bush's, who ran up $5.3 trillion in trade deficits in goods.

In four years and eight months, Obama has piled up trade deficits totaling more than $3 trillion.

Thus, during 25 years of free-trade globalism, the United States has run up well over 10 trillion, or ten thousand-billion, dollars in trade deficits in goods.

And what do we have to show for it?

Our economic independence is history. We rely on foreigners for the necessities of life. We are the greatest debtor nation in history. Beijing and Tokyo bank scores of billions in annual interest payments on the T-bills and Treasury bonds they hold. And as the gleaming cities of Asia rise, America's infrastructure visibly crumbles.

The real wages of our working men and women have not risen in decades. In the first decade of this century, we lost 6 million manufacturing jobs as 55,000 factories disappeared.

Why should successful Germans emulate the folly of the failed American politicians responsible for the decline of the greatest republic in the history of mankind?