The 'We Can't Win' Wimps Caucus 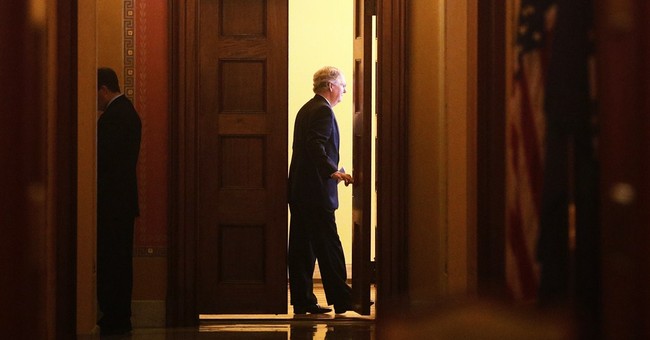 "We told you you would lose!" wail the Beltway bundlers of the Republican establishment.

"We told you you would lose!" moan neoconservative columnists from their privileged perches on the op-ed pages of the Beltway press.

"Look at what Ted Cruz and this Tea Party people did to us," wails the GOP establishment. "Look what has happened to our brand." And 2014 was looking wonderful.

What a basket of wimps.

While the political and communications strategy of the fight to defund Obama seems not to have been thought through, can someone explain what else a moral and principled Republican party could have done in the continuing resolution, other than try to defund Obamacare?

Have we lost sight of what a monstrosity this is?

It is an immense new entitlement program being hoisted upon a nation whose back is now breaking from Great Society entitlements.

Obamacare forces Catholics to provide sterilization and abortion-inducing drugs that trample upon traditional teachings about how they are to live their lives.

Recent days have exposed employers cutting back workers to 29 hours, insurance premiums surging, doctors rebelling. Obamacare moves America inexorably toward a national health care system such as they have in socialist Great Britain.

Finally, the rollout of Obamacare by Kathleen Sebelius' Department of Health and Human Services has made the rollouts of Edsel and New Coke look like marketing triumphs.

How could any principled Republican conservative vote to impose this moral, fiscal, social and technological disaster upon our country?

House Republicans should vote to fund Obamacare in a clean CR. Then exploit the disaster of the rollout to show what a horror it is. This will pump up our polls and improve our field position for 2014.

Then we can pick up some seats!

Bottom line: Let's vote to impose Obamacare on America and make Democrats pay the price of the calamity we voted to impose.

Now there may be a more cynical strategy than deliberately doing permanent damage to your country to help your party.

Right now, I just can't think of it.

A party that would do such a thing would not only not deserve office; it would raise valid questions about the reasons for its continued existence. If this is how Republicans will behave when facing a decision on moral and political principle, why would conservatives want such a crowd representing them?

The Beltway GOP had best step back and take a hard look at the nation they are supposed to defend.

A decades-long failure to address mass immigration has brought to our shores scores of millions now being moved wholesale to ballot boxes to vote the Party of Reagan out of power forever.

With GOP collusion, the welfare state has grown so immense -- with half the nation paying no income taxes and half now reaping benefits -- Republicans who stand for fiscal sanity face increasingly insuperable numbers in many states.

With the Greatest Generation and Silent Generations passing on, Baby Boomers, the largest generation in history, are two years into Social Security and Medicare. Those programs are exploding, as the share of our working population is steadily sinking.

Real incomes of Americans are stagnant. Since George H. W. Bush, we have run $10 trillion in trade deficits no one mentions but can be seen in the gleaming cities of Asia and East China and the corroded and collapsing infrastructure of America.

Though the debt is hitting $17 trillion and the Fed prints a trillion a year to buy up paper, T-bills and mortgage-backed securities, the U.S. growth rate remains anemic by historic standards.

Query: Did the Tea Party do all this to America, or was this caused by colossal Washington stupidity and legendary Wall Street greed?

Republican cravenness and cowardice before the commands of political correctness has gone on so long that the natural response to capitulate now appears a conditioned reflex of the Beltway Party.

Yet, how, without standing and fighting against the inexorable drive to remake our republic into a socialist democracy, where tax consumers are endlessly milking tax producers in a steadily debilitating and dying economy, do Republicans think they are going to stop this?

Or is their hidden agenda simply bipartisan comity and smiling acceptance of an endless series of retreats until the outcome is irreversible? Whatever one may say of the House Republican majority at least they fought.

When his troops were in a funk, FDR used to say, "Get me a bill down here I can veto!" What FDR meant was -- Let's start a fight with the Republicans; that will get the boys' morale back up.

That's what Republicans need now. They should tell the Democrats there will be no new taxes in any budget deal, and if there is no deal, the sequester rolls on.

Then they should demand that the incompetent at HHS be fired and her entire entourage with her. Unless, of course, the party fears it might be charged with waging a "war on women."