Is the Conflict Between Us Irreconcilable? 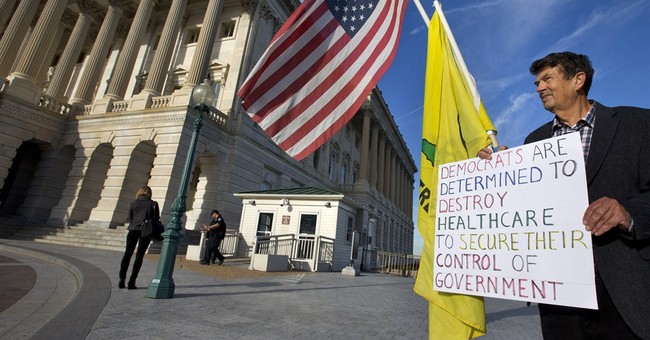 Trending
One way or another, the battle of the budget and the debt ceiling will be over by All Hallows' Eve.

Yet, as one looks deeper, at the irreconcilable conflict behind the present clash, only a roaring optimist would imagine we shall ever know again the tranquility and unity of the Eisenhower-Kennedy years.

Consider the bile dumped upon Tea Party Republicans by Barack Obama, Harry Reid and their camp followers in the national press.

What did the Tea Party do to deserve this? Answer: These extremists shut down the U.S. government, they're holding America hostage, and they're inflicting terrible suffering on innocent people.

But is this true?

Three times in a fortnight, the House has voted to fund every department, agency, and program of the government -- except Obamacare. Who, then, is truly shutting down the government?

What we are witnessing here is the unfolding of the Big Lie -- the constant repetition of a transparent falsehood -- to persuade a pliable public not only to believe it, but to recite it, as in Orwell's "1984."

Obamacare, we are told, was enacted by Congress, signed by the president, upheld by the Supreme Court, confirmed by Obama's victory in 2012. To try to defund or reform it amounts to an attempted coup, an overturning of the election results of November.

But does not Congress have the power of the purse to fund or defund any program it chooses? Is that not in the Constitution?

And have not the last three years exposed glaring flaws in Obamacare? Have not severely adverse consequences turned up in widespread layoffs and a reversion to part-time help? Did not the Cleveland Clinic say it will have to let 3,000 people go?

Why then is the House's exercise of its constitutional authority to defund Obamacare, which polls show a majority of Americans favor, such a moral outrage?

This brings us to the underlying conflict.

The Obamacare battle is part of a larger struggle between a party of government and a conservative party that fears America is heading down a road traveled by Greece, Italy and Spain.

Now the party of government can surely claim credit for Social Security, Medicare, Medicaid and Obamacare. Yet, that same party is also responsible for driving New York City to the brink of bankruptcy in the 1970s and for the disaster that is Detroit today.

That party is also responsible for an unsustainable welfare state where half the U.S. population pays zero income taxes but consumes hundreds of billions yearly in social welfare benefits.

And how are the people who preside over this annual redistribution of America's wealth faring? Just fine, thank you.

According to the latest data from the Census Bureau, the four counties in the United States with the highest median family income are all in the D.C. area: Arlington, Loudoun and Fairfax County, Va., and Howard County, Md. Maryland's Montgomery County, just north of D.C., ranks 7. Five of the top ten. Not bad, eh?

Big government and the Fat City are one in Barack Obama's America.

And how does the Tea Party imperil the country?

First, they risk taking America over the cliff into default. But that raises a question: Since the Tea Party folks are newcomers to town, who brought America to the edge of this cliff?

What radical added $6 trillion to our national debt in five years? Or did the Tea Party do that?

Is the Tea Party responsible for this gathering disaster?

When the Tea Party says the Fed's QE3 amounts to printing money and inflating the currency, that it is creating stock market and real estate bubbles certain to burst, and that the dollar's future as the world's reserve currency is imperiled, do they not have a point?

These same views are today being echoed by economists and writers, few of whom are ever likely to show up wearing side arms at God and Country Rallies.

And just where did our community-organizer president learn his economics. From Saul Alinksy's "Rules for Radicals"? From his senate days in Springfield, capital of the state that is the odds-on favorite to be first in the nation to default on its debts?

The Tea Party is feared and detested in Washington because these folks threaten the ideology, the vested interests, and most critical of all, the rice bowls in this city that voted 15-1 for Obama.