No Syrian War to Save Obama's Face! 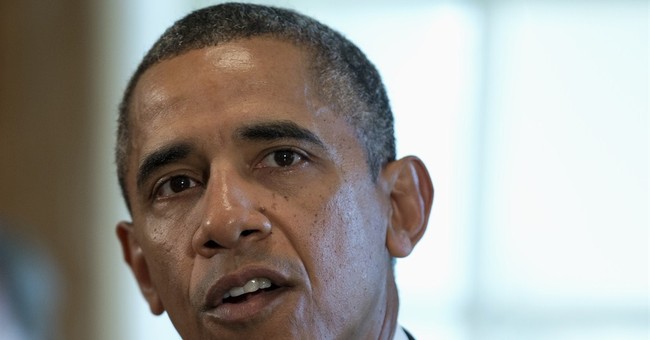 If Congress votes no on a resolution calling for U.S. intervention in Syria's civil war, says McCain, it would be "catastrophic" for U.S. credibility in the world.

Consider what the senator is saying here.

Because Barack Obama, two years ago, said "Assad must go," and, one year ago, said any use of chemical weapons crosses his "red line," Congress has no choice but to plunge America into yet another Mideast war.

Can this be? Are we really, as a nation, required to go to war to make good the simple-minded statements of an untutored president who had no constitutional authority to issue his impulsive ultimata?

Are we really required to go to war to get the egg off Obama's face?

Not since the War of Jenkins' Ear has there been a dumber cause for a great country to go to war. Is there no way out?

There is, and it's right in front of us.

The House, Senate or both can vote no on the war resolution and Obama can then say, as did David Cameron, that, while he disagrees, he respects the decision of a Congress in which the Constitution placed sole authority to authorize America's going to war.

Are Brits now crying "catastrophe!"? Do the Spanish no longer think the Brits will defend Gibraltar? Is Britain now wholly non-credible to the world?

For Obama, and for us, it is the other options that invite catastrophe.

If, for example, the House or Senate votes down the war resolution and Obama, without authorization from Congress, the Security Council, NATO or the Arab League plunges us into a new war this nation does not want to fight, he will be courting a geostrategic and political disaster.

Even if Congress approves a war resolution, the president should think long and hard about diving into a war he sought to avoid and stayed out of for over two years. Make no mistake; if Obama attacks Syria, be it for hours or days, we are in that blood-soaked abattoir for the duration.

In his dramatic statement Saturday, as politically astute as it was constitutionally correct, Obama called Syria "someone else's war."

Whose war? It is Shia Alawite vs. Sunni, Muslim vs. Christian, Kurd vs. Arab, Islamist vs. secularist. Backing Bashar Assad are Iran, Hezbollah and Russia. Backing the rebels are Turkey, Saudi Arabia, the Gulf states, al-Qaida, foreign jihadists and the Muslim Brotherhood.

Assad is accused of killing 100,00 people. But that is the total of the dead in a civil war Assad has as much right to fight as the rebels. While his army is accused of using gas on civilians, the Islamist rebels have murdered Christians, massacred captives and engaged in public acts of cannibalism on dead Syrian soldiers.

Gas is a sickening weapon. Yet, there is no evidence thus far that Assad ordered its use. Rebel elements are said to have been found with sarin. As for Americans who tend to prefer white phosphorus, napalm and cluster bombs, upon what lofty moral ground do we stand?

Have we forgotten that Churchill wanted to drop anthrax on Germany and settled for two days of firebombing the defenseless city of Dresden? Or that our great friend Anwar Sadat was the confidante of Gamal Abdel Nasser when Egypt was using poison gas on Yemeni tribesmen?

The United States does not have any national security interest in Syria's war. Why would we then launch missile attacks to "degrade" Assad's military, when that army and air force are all that stands between us and a privileged sanctuary for al-Qaida in northern Syria, not unlike what al-Qaida had in Tora Bora and Waziristan.

We are told that if we do not strike Syria -- making good on Obama's threats -- Israel, Turkey and even Japan and South Korea will not be able to trust us ever again.

What nonsense. We have treaties with Japan and South Korea. As for Turkey and Israel, if what is happening in Syria is outrageous and dangerous, why do they not act? Why do they keep tugging at our sleeve?

The Israeli Air force is five minutes from Damascus, its army a two-day march. The Turks have three times Syria's population and a 400,000-man army equipped with NATO weapons. Together, they could invade and turn the tide in a week. Why do they not man up?

McCain and Sen. Lindsey Graham came out of the Oval Office saying Obama was open to wider strikes on Syria and more lethal support for the rebels. As Iran, Hezbollah and Russia would then upgrade their own weapons shipments to Damascus, this will mean more dead, more wounded, more tens of thousands fleeing into exile and a longer war.

But what it will likely end with, after America is dragooned in, is a U.S. war with Iran; our allies, sitting in their box seats, cheering us on.

And that is the dog you will not hear bark in the war-on-Syria debate.