Dead Souls of a Cultural Revolution 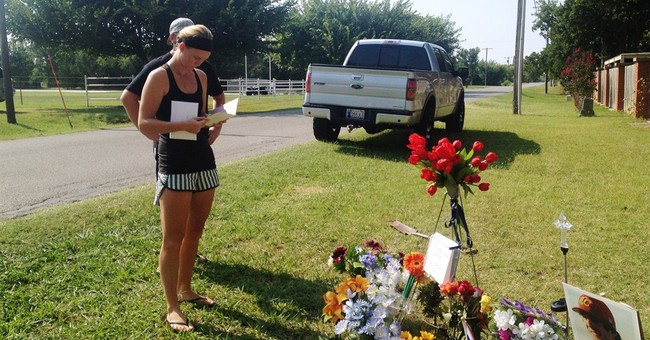 Last Friday, Christopher Lane, a 22-year-old Australian here on a baseball scholarship, was shot and killed while jogging in Duncan, Okla., population 23,000. He died where he fell.

Police have three suspects, two black and one white. The latter said they were bored and decided to shoot Lane for "the fun of it."

As Lane was white and the shooter black, racism has surfaced as a motive. Thursday came reports that killing a white man may have been an initiation rite for the black teens in joining some offshoot of the Crips or Bloods.

What happened in Oklahoma and the reaction, or lack of reaction to it, tells us much about America in 2013, not much of it good.

Teenagers who can shoot and kill a man out of summertime boredom are moral barbarians, dead souls.

But who created these monsters? Where did they come from? Surely one explanation lies in the fact that the old conscience-forming and character-forming institutions -- home, church, school, and a moral and healthy culture fortifying basic truths -- have collapsed. And the community hardest hit is Black America.

If we go back to the end of World War II, 90 percent of black families consisted of a mother and father and children raised and disciplined by their parents. The churches to which these families went on Sundays were stronger. Black schools may have been largely segregated, but they were also the transmission belts of patriotism and traditional values rooted in biblical truths and a Christian faith.

Though such schools graduated hardworking, law-abiding and productive citizens, today they would be closed as unconstitutional.

Indeed, all of those character- and conscience-forming institutions of yesterday are in an advanced state of decline today.

Seventy-three percent of black kids are born to single moms. Black kids who make it to 12th grade may often be found reading at seventh-, eighth- or ninth-grade levels. In some cities the black dropout rate can hit as high as 50 percent.

Drugs are readily available. And among black males ages 18 to 29, in urban areas, often a third are in prison or jail, or on probation or parole, or walking around with a criminal record.

Where do the kids get their ideas of right and wrong, good and evil? In homes where the father is absent and the TV is always on. From radios tuned in to rap and hip-hop. From films where Hollywood values prevail and the shooting never stops. From street gangs that sometimes form the only families these kids have ever known.

And so it has. But that is only because the baby boomers, the largest population cohort in our history, passed out of the high-crime age group a quarter of a century ago, and because the jail and prison population in America has tripled.

What kind of leadership do we see today in Black America?

What can be said for an NAACP that was lately demanding a Justice Department investigation of a rodeo clown running around a bull ring in rural Missouri in an Obama mask, but cannot find its voice to address a black-on-white atrocity in Middle America?

When Trayvon Martin was shot to death in a murky incident in Sanford, Fla., Jesse Jackson rushed there to declare: "Blacks are under attack. ... Killing us is big business." Trayvon was "shot down in cold blood by a vigilante ... murdered and martyred."

After Chris Lane's cold-blooded murder, Jesse tweeted: This sort of thing is to be "frowned upon."

If I had a son, said President Obama, he would have looked like Trayvon; 35 years ago, I could have been Trayvon. Can the president not find his voice to speak to the parents of Chris Lane?

Since Lyndon Johnson took office, 50 years ago, we have spent trillions on his programs for health care, housing, education, food stamps, welfare and civil rights. Are we living in that Great Society we were promised?

In that same decade, we were told that the social, cultural and moral revolution bursting forth on the campuses would rid us of the repressive old-time morality and Old Time Religion, and lead to a more equal, just, humane and better America, a beacon to mankind.

Yet, are not the killers of Chris Lane who shot him for the fun of it the "do-your-own-thing!" children of that cultural revolution?

The death of Trayvon was said to be reflective of the real America, a country where black folks live in constant fear of white vigilantes and white racist cops. What nonsense.

In the real America, interracial violence is overwhelming black-on-white. Even if the media will not report it, everybody knows it.

And journalists will not dig into the numbers that prove it, for the truth would undermine their ideology and contradict the narrative that governs and gives meaning to their lives.

For liberals, America is always "Mississippi Burning." It just has to be that way.