The Pentagon's Surrender to Feminism 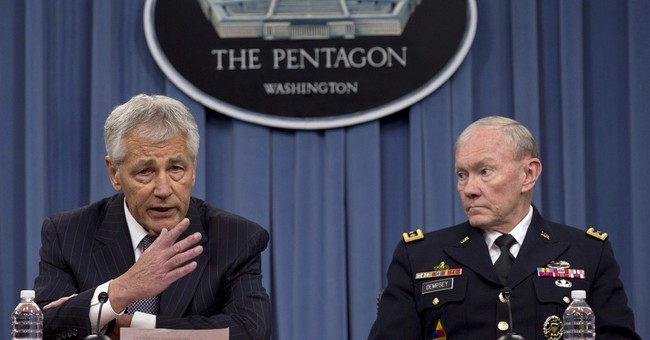 "The Pentagon unveiled plans Tuesday for fully integrating women into front-line and special combat roles, including elite forces such as Army Rangers and Navy SEALs."

So ran the lead on the CNN story. And why are we doing this?

Did the young officers leading troops in battle in Afghanistan and Iraq, returning with casualties, say they needed women to enhance the fighting efficiency of their combat units and the survival rate of their soldiers?

Did men from the 101st and 82nd airborne, the Marines, the SEALs, and Delta Force petition the Joint Chiefs to put women alongside them in future engagements to make them an even superior force?

No. This decision to put women in combat represents a capitulation of the military brass, a surrender to the spirit of our age, the Pentagon's salute to feminist ideology.

This is not a decision at which soldiers arrived when they studied after-action reports, but the product of an ideology that contradicts human nature, human experience and human history, and declares as dogma that women are just as good at soldiering as men.

But if this were true, rather than merely asserted, would it have taken mankind the thousands of years from Thermopylae to discover it?

In the history of civilization, men have fought the wars. In civilized societies, attacks on women have always been regarded as contemptible and cowardly. Even the Third Reich in its dying hours did not send women into battle, but old men and boys.

"You don't hit a girl!" was something every American boy had drilled into him from childhood. It was part of our culture, the way we were raised. A Marine friend told me he would have resigned from the Corps rather than fight women with the pugil sticks used for bayonet practice at Parris Island.

Sending women into combat on equal terms seems also to violate common sense. When they reach maturity, men are bigger, stronger, more aggressive. Thus they commit many times the number of violent crimes and outnumber women in prisons 10 to 1.

For every Bonnie Parker, there are 10 Clyde Barrows.

Is it a coincidence that every massacre discussed in our gun debate -- from the Texas Tower to the Long Island Railroad, from Columbine to Ft. Hood, from Virginia Tech to Tucson, from Aurora to Newtown -- was the work of a crazed male?

Nothing matches mortal combat where soldiers fight and kill, and are wounded, maimed and die for cause or country. Domestically, the closest approximations are combat training, ultimate fighting, boxing and that most physical of team sports, the NFL.

Yet no women compete against men in individual or team sports. They are absent from boys' and men's teams in high school and college, be it football, basketball, baseball, hockey or lacrosse.

Even in the non-contact sports of golf, tennis and volleyball, men compete with men, women against women. In the Olympics, to which nations send their best athletes, women and men compete separately in track and field, swimming and gymnastics.

Consider our own history. Would any U.S. admiral say that in any of America's great naval battles -- Mobile Bay, Manila Bay, Midway, the Coral Sea -- we would done better with some women manning the guns?

In the revolutionary and civil wars, World Wars I and II, Korea and Vietnam, women were not in combat. Was it invidious discrimination of which we should all be ashamed that women were not fighting alongside the men at Gettysburg, in the Argonne, at Normandy or with "Chesty" Puller's Marines in the retreat from the Chosin Reservoir?

Undeniably, some women might handle combat as well as some men. But that is true of some 13-, 14- and 15-year-old boys, and some 50- and 60-year old men. Yet we do not draft boys or men that age or send them into combat. Is this invidious discrimination based on age, or ageism?

Carry this feminist-egalitarian ideology to its logical conclusion, and half of those storming the Omaha and Utah beaches should have been girls and women. Is this not an absurdity?

We have had Navy ships become "love boats," with female sailors returning pregnant. At the Naval Academy, three midshipmen, football players, allegedly raped an intoxicated classmate. For months, she was too ashamed and frightened to report it.

An estimated 26,000 personnel of the armed forces were sexually assaulted in 2011, up from 19,000 in 2010. Obama and the Congress are understandably outraged. Such assaults are appalling. But is not the practice of forcing young men and women together in close quarters a contributory factor here?

Among the primary reasons the Equal Rights Amendment, the ERA, went down to defeat three decades ago was the realization it could mean, in a future war, women could be drafted equally with men, and sent in equal numbers into combat.

But what appalled the Reaganites is social progress in the age of Obama. This is another country from the one we grew up in.