The Bell Tolls for the 'New Majority' 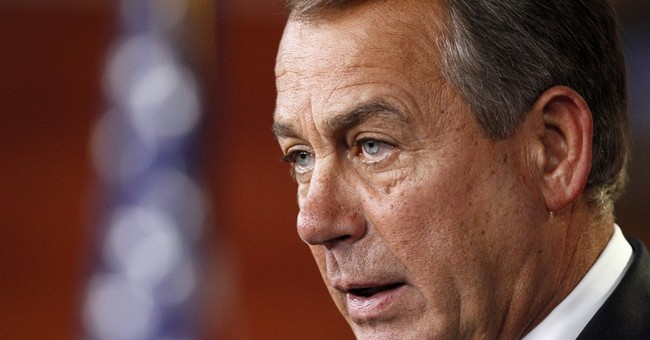 Next year should be a banner year for the GOP, and may yet be.

Obamacare, a "train wreck" about to happen, says Democratic Sen. Max Baucus, goes into full effect Jan. 1, with the popular IRS as enforcer.

The White House is bedeviled by scandals, the second-term curse has caught up with the Obama presidency, and prospects for the U.S. economy seem dicier than a few months ago.

History is also on the GOP's side. In the second midterm elections, Presidents Wilson, FDR, Eisenhower, JFK-LBJ, Nixon-Ford, Reagan and Bush II all suffered big losses. It has become a tradition.

But if the GOP is favored to hold the House and make gains in the Senate, the long-term prognosis for the party remains grim.

First, libertarianism is breaking up that old gang of mine.

Sens. John McCain and Lindsey Graham call for air strikes on Syria. But no echo is heard, as the Republican Party becomes anti-interventionist.

Yet the acid test comes after Friday's Iranian election, as the neocon war drums begin to beat.

Libertarian Republicans believe the National Security Agency is Big Brother and the Brave New World at hand. National security Republicans back the agency's right to access private data banks to protect us from terrorism.

On how to deal with 12 million illegal aliens -- send them home or grant them amnesty and a "path to citizenship" -- the party's rancorous division will be starkly visible when the bill reaches the House.

But the existential crisis of the GOP, from which it has turned its eyes away since George H.W. Bush, is demography.

Yet the matter cannot be avoided now, for it is on page one.

"White Numbers Shrink," was the headline on the lead story in USA Today. "More Whites Dying Than Being Born," blared The Wall Street Journal. What does this mean?

In demographic terms, more white Americans died in 2012 than were born. Never before -- not during the Civil War bloodletting, not during the influenza epidemic after World War I, not during the Great Depression and birth dearth of the 1930s -- has this happened.

In ethnic terms, it means that Americans whose forebears came from Great Britain, Ireland and Germany, Southern and Eastern Europe -- the European tribes of North America -- have begun to die.

The demographic winter of white America is at hand, even as it began years ago for the native-born of old Europe.

In political terms, this is depressing news for the Republican Party. For nearly 90 percent of all Republican votes in presidential elections are provided by Americans of European descent.

In 1960 white folks were close to 90 percent of the entire U.S. population and 95 percent of the electorate. Nixon's New Majority was created by pulling Northern Catholic ethnics and Southern conservative Protestants, white folks all, out of the Roosevelt coalition and bringing them into a new alliance that would give Nixon a 49-state landslide in 1972, which Reagan would replicate in 1984.

But since that New Majority gave the Republicans five victories in six presidential elections, four of them 40-state landslides, the political world has turned upside down, and demography is the cause.

Mitt Romney won 59 percent of the white vote, a 3-to-2 victory over Obama among America's majority. In any year before 1980, that would have meant victory. But in 2012 whites were only 74 percent of those who went to the polls.

Thus, Obama's sweep of 80 percent of the African-American, Asian and Hispanic vote, one-fourth of the electorate and rising, enabled him to coast to a second term.

Where is America going? What does the GOP future look like?

America's white majority, 64 percent of the population and 74 percent of the electorate, still declining in relative terms, has begun to decline in real terms. Deaths outnumber births. Among all U.S. births in 2012, white babies were outnumbered by babies of color.

If Republicans are opposed to what mass immigration is doing to the country demographically, ethnically, socially and politically, there are, as Reagan used to say, "simple answers, just no easy answers."

Those answers: No amnesty, secure the border, enforce laws against businesses that hire illegals, and impose a moratorium on new immigration so wages can rise and immigrants enter the middle class and start voting as did the children and grandchildren of the immigrants of 1890-1920 by 1972.

So what are the Republicans doing?

Going back on their word, dishonoring their platform, and enraging their loyal supporters, who gave Mitt 90 percent of his votes, to pander to a segment of the electorate that gave Mitt less than 5 percent of his total votes.

Whom the gods would destroy they first make mad.

Patrick J. Buchanan is the author of "Suicide of a Superpower: Will America Survive to 2025?" To find out more about Patrick Buchanan and read features by other Creators writers and cartoonists, visit the Creators webpage at www.creators.com.