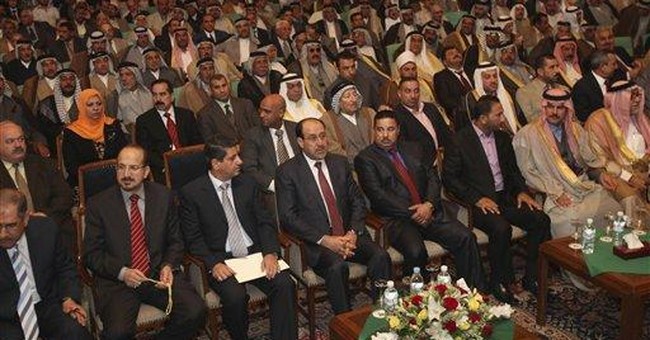 Impending today are two of the most critical decisions Barack Obama will ever make, which may determine the fate of his presidency, as well as the future of the United States in the Near and Middle East.

The first is whether to approve Gen. Stanley McChrystal's request for thousands more U.S. troops he says he needs to prevent "mission failure" -- i.e, to stave off a U.S. defeat in Afghanistan.

The second is whether Obama will start up the road of "crippling sanctions" to war with Iran, to prevent Tehran from moving closer to a capacity to produce nuclear weapons.

If Obama approves McChrystal's request, what will it buy him? Rising costs and casualties, deepening division in his party and his war-weary country, but no light at the end of a seemingly endless tunnel.

Indeed, it seems certain that 45,000 new U.S. troops would be but a down payment on an army of hundreds of thousands, for the years that it would take to build an Afghan army that can defend the government and people against a Taliban embedded in a Pashtun tribe that is half the population. And the odds that our Afghan allies would survive when we left would be no greater than the odds our Cambodian and Vietnamese allies would survive our departure in 1973.

Yet if Obama rejects McChrystal's request, he risks resignations by generals and Republican savagery for lacking the moxie of Mr. Bush, when he doubled down in Iraq, named Gen. David Petraeus commander and agreed to a surge of 30,000 troops, which prevented a defeat the Baker Commission had all but predicted in 2006.

Obama is facing an awful choice.

Committing 45,000 more troops to Afghanistan will not assure victory, McChrystal is telling the president, but denying him the 45,000 troops may ensure an American defeat.

Being forced to make this Hobbesean choice will surely affect Obama's decision on Iran. Seeing what a decade of war has done to his country, he cannot want a third war with a nation more populous than Iraq and Afghanistan combined.

Yet that is where the sanctions regime is inevitably headed.

The dilemma: The regime, backed by the Iranian people, is not going to give up its treaty rights to nuclear power, or the ability to generate it from yellow cake to enriched uranium. However, the knowledge and capability Iran gains from its investment in nuclear power will bring it to the edge of the red zone -- the ability to "break out" and, perhaps in a matter of months, produce the highly enriched uranium that is the core of atom bombs.

Other countries that rely on nuclear power, Japan and South Korea, surely have the capability to produce an explosive device. They have preferred life without nuclear weapons.

Will Iran also be content with this, knowing that if it explodes a device, the Saudis, Egyptians and Turks will follow, that Israel would put a hair trigger on its nuclear arsenal, that the United States would retaliate massively against Iran if any nuclear weapon were detonated by Islamic terrorists on American soil?

The sanctions road appears headed for dead end, or war.

"Smart sanctions" that punish Iran's leaders are not going to persuade them to give up a nuclear program for which they have already suffered and sacrificed greatly. And a cutoff of gasoline to Iran would hit hardest not the Revolutionary Guard but Iran's middle class, which tends to be anti-regime and pro-Western.

As for an attack on Iran, what would be the purpose of bombing Natanz, when IAEA inspectors says that its thousands of centrifuges are producing only nuclear fuel, which has never left the facility?

When Israel bombed the Osirak reactor outside Baghdad in 1981, which was subject to inspections, Saddam Hussein started a secret program to build bombs. Would not an attack on Iran's facilities that are under IAEA inspection lead inevitably to a regime decision to go for a bomb as the only deterrent against Israel or the United States?

As one steps back and looks at a decade of U.S. intervention and war in the Middle East, what has it all availed us?

Iraq cost 4,000 U.S. dead, 30,000 wounded and a trillion dollars. It divided our country, alienated the Arab world, and left scores of thousands of Iraqi dead, and hundreds of thousands wounded, widowed and orphaned.

The Shia who now run the country are moving away from us, and closer to Iran, as we depart.

In Afghanistan, after eight years, we face a longer and bloodier war or, says McChrystal, "mission failure." With Iran, we are heading up a sanctions escalator toward yet another war. And 10 years of involvement has not brought the Palestinian conflict a centimeter closer to resolution.

The killers of 9-11 were over here because we were over there. How has being over there benefited us, to compensate for the cost?