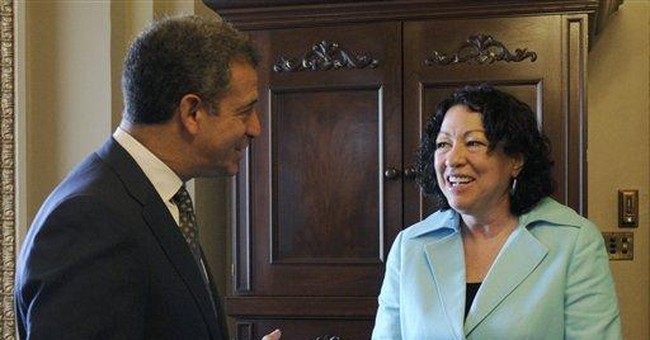 Having lost the Congress in 2006 and the White House in 2008, Republicans are looking to redefine themselves for a nation that still leans conservative but is less Republican that it has been in decades.

The nomination of Judge Sonia Sotomayor to the U.S. Supreme Court presents just such an opportunity. For, even if the party loses the battle and Sotomayor sits on the court, it can win the war, as Ronald Reagan won the Panama Canal debate, even as Senate Republicans committed collective suicide by voting to give away the canal.

What are the grounds for rejecting Sonia Sotomayor?

No one has brought forth the slightest evidence she has the intellectual candlepower to sit on the Roberts court. By her own admission, Sotomayor is an "affirmative action baby."

Though the Obama media have been ballyhooing her brilliance -- No. 1 in high school, No. 1 at Princeton, editor of Yale Law Review -- her academic career appears to have been a fraud from beginning to end, a testament to Ivy League corruption.

Two weeks ago, The New York Times reported that, to get up to speed on her English skills at Princeton, Sotomayor was advised to read children's classics and study basic grammar books during her summers. How do you graduate first in your class at Princeton if your summer reading consists of "Chicken Little" and "The Troll Under the Bridge"?

In video clips dating back 25 years, and now provided to the Senate Judiciary Committee, Sotomayor, according to the Times, even calls herself an "affirmative action product."

"The clips include lengthy remarks about her experiences as an 'affirmative action baby,' whose lower test scores were overlooked by admissions committees at Princeton University and Yale Law School because, she said, she is Hispanic and had grown up in poor circumstance."

"If we had gone through the traditional numbers route of those institutions," says Sotomayor, "it would have been highly questionable if I would have been accepted. ... My test scores were not comparable to that of my classmates."

Thus, Sotomayor got into Princeton, got her No. 1 ranking, was whisked into Yale Law School and made editor of the Yale Law Review -- all because she was a Hispanic woman. And those two Ivy League institutions cheated more deserving students of what they had worked a lifetime to achieve, for reasons of race, gender or ethnicity.

This is bigotry pure and simple. To salve their consciences for past societal sins, the Ivy League is deep into discrimination again, this time with white males as victims rather than as beneficiaries.

One prefers the old bigotry. At least it was honest, and not, as Abraham Lincoln observed, adulterated "with the base alloy of hypocrisy."

As the Times reports, on the tapes, Sotomayor rejects "the proposition that minorities must become advocates of 'selection by merit alone.' She said diversity improved the legal system."

"'Since I have difficultly defining merit and what merit alone means, and ... whether it's judicial or otherwise, I accept that different experiences, in and of itself, bring merit to the system,' she said, adding, 'I think it brings to the system more of a sense of fairness when these litigants see people like myself on the bench."

What does the latest Times revelation tell us?

Indeed, the White House itself leaked that the final four court candidates were all women and Sotomayor was picked because she was a Latina. One wonders how many superior students and judges have been passed over to advance Sonia Sotomayor's career?

From college days to court days, that career reflects, in word and deed, a determination to use any power she achieves to create a society where the demands of diversity triumph over the ideal of equal justice under law. For Sotomayor, the advancement of people of color over white males is justice.

Republican senators should use this Sotomayor nomination to put affirmative action in the dock for what it is -- race-based bigotry against white males so that persons of color can receive the rewards of society that they could not win in free and fair competition.

Lay out the Sotomayor record -- SAT scores, LSAT scores, bar exam score, law review articles and her opinions -- so that we can see up close what those who eviscerated Robert Bork regard as academic and judicial excellence.

No need for name-calling.

Just lay out the lady's opinions and record, so that, if she is elevated, Americans can say: Barack Obama voted against Chief Justice Roberts because Roberts could not measure up to Sonia Sotomayor, his ideal of what a justice ought to be.