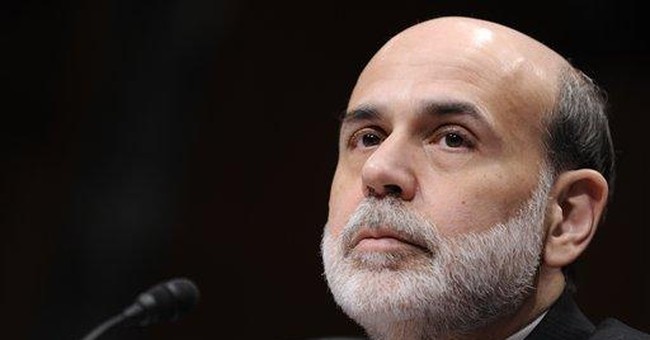 "The best way to destroy the capitalist system is to debauch the currency," said Lord Keynes.

Deflation is what America underwent in the 1930s. A Fed-created bubble burst, causing margin calls to go out to stockholders, who ran to their banks that, besieged, collapsed, wiping out a third of our money. As Milton Friedman, who won a Nobel for his thesis that the Federal Reserve caused the Great Depression, told PBS in 2000:

"For every $100 in paper money, in deposits, in cash, in currency, in existence in 1929, by the time you got to 1933 there was only about $65, $66 left. And that extraordinary collapse in the banking system, with about a third of the banks failing ... with millions of people having their savings essentially washed out, that decline was utterly unnecessary.

"(T)he Federal Reserve had the power and the knowledge to have stopped that. And there were people at the time who were ... urging them to do that. So it was ... clearly a mistake of policy that led to the Great Depression."

Is Bernanke fighting the war of 1929 in 2009? Surely, today, with the explosion in M1, the basic money supply, there is no shortage of dollars out there, even if they are not circulating fast enough.

To end our recession, Bernanke may be running an even greater risk: hyper-inflation. This has destroyed more nations than deflation or even depression.

Recall: It was French military intervention in the Ruhr in 1923, to force payment of war reparations, and Weimar's decision to let the currency fall and pay the French in cheap marks that led to the wipeout of the German middle class, the discrediting of that democratic republic and the Munich beer-hall putsch of Adolf Hitler.

"The first panacea for a mismanaged nation," said Ernest Hemingway, "is inflation of the currency; the second is war. Both bring a temporary prosperity; both bring a permanent ruin. But both are the refuge of political and economic opportunists."

Which brings us to last week's shocker.

The Fed will buy up $300 billion in long-term Treasury bonds and spend $750 billion more buying sub-prime mortgages to remove them from the balance sheets of ailing big banks, to get the banks lending again.

This new gusher from the Fed, after the $700 billion TARP bailout, comes on top of a Congressional Budget Office estimate that this year's deficit will be $1.85 trillion, 13.1 percent of gross domestic product, more than twice the share of the U.S. economy of the largest previous postwar deficit.

Concluding the dollar is being abandoned in a frantic Fed effort to stop the recession, markets reacted instantly. The dollar plunge was the steepest since the Plaza Agreement of 1985. Gold shot up to $950 an ounce. Silver had a 12 percent run-up, the sharpest ever. Oil prices surged above $50 a barrel. Commodity markets advanced.

The Fed seems to have confirmed the fears of Premier Wen Jiabao, who said that China is "definitely a little worried" about the value of the U.S. bonds Beijing has purchased with the dollars piled up from her trade surpluses with the United States.

Can one blame the Chinese? They have already been burned on their U.S. investments. And if the defense of the dollar against its ancient enemy inflation is being abandoned, and protecting the dollar is to take a back seat to the Fed's fight to avoid deflation, than it is indeed time to get out of the dollar and dollar-denominated assets.

For inflation is theft. It make liars and cheats of governments. By eroding the value of a currency, inflation punishes savers and creditors and rewards debtors. And what nation is the biggest debtor of them all? The United States of America.

Insidiously, inflation consumes the value of cash, savings, municipal bonds, corporate bonds, Treasury bonds and T-bills. Friends who lent America money, who bought our debt in good faith, are robbed and made fools of, while speculators who bet against America by shorting the dollar in the currency markets are vastly rewarded.

Given the $3.6 trillion budget Obama plans, the $1.8 trillion in red ink he will run by Oct. 1 and the trillions the Fed is pumping into the economy, gross domestic product should spike, as it did after the far smaller stimulus package of 2008

We will feel a healthy glow, and folks will begin to sing, "Happy Days Are Here Again."

Yet, one senses that we are doing again exactly what we have done before in this generation. Rather than endure the pain and accept the sacrifices to cure us of our addiction, we are going back to the heroin. And this time, with Dr. Bernanke handling the needle, we may just overdose.