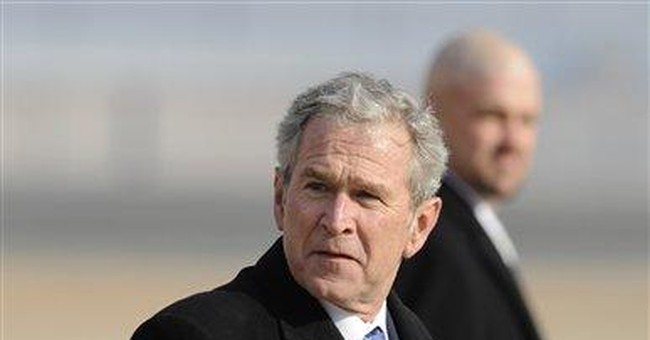 "Bush Boom Continues" trilled the headline over the Lawrence Kudlow column, as George W. Bush closed out his seventh year in office.

"You can call it Goldilocks 2.0," purred Kudlow.

Yes, you could. But what a difference 12 months can make.

Final returns are now in on the eight years of George Bush. Charles McMillion of MBG Information Services has crunched the numbers. And, pace Kudlow, the only relevant comparison is to Herbert Hoover.

From January 2008, right after Kudlow's column ran, through January 2009, the U.S. economy lost 3.5 million jobs. The private sector loss of 3.65 million jobs was slightly offset by 148,000 jobs created by federal, state and local governments. Say what you will, the Bush years were boom times for Big Government.

And the private sector? Beginning and ending in recession, the Bush presidency added a net of 407,000 private sector jobs over eight years, less than 51,000 a year, the worst eight-year record since 1927-35, which includes the first six years of the Great Depression.

By January 2009, the average workweek had fallen to 33.3 hours, the lowest since record keeping began in 1964.

As a source of American jobs, manufacturing, for the first time in our history, fell below health care and education in 2001, below retail sales in 2002, below local government in 2006, below leisure and hospitality, i.e., restaurants and bars, in 2008.

Between this unprecedented loss in manufacturing capacity and jobs, and the $3.5 trillion in trade deficits in manufactured goods alone, run up by George W. Bush, the correlation is absolute.

Last week, final trade figures for 2008 came in. They make for riveting reading for Americans who yet believe that manufacturing is an indispensable element of national power.

With China exporting five times the dollar volume in goods to us as she imports from us, Beijing's trade surplus with the United States set yet another world record: $266 billion.

Which of us, China or America, has the trade profile of a mature industrial and technological power?

Americans deplore our deepening dependence on foreign regimes for the vital necessity of oil. Are they unaware that the U.S. trade deficit in manufactured goods, $440 billion, is $89 billion greater than our all-time record trade deficit of $351 billion in crude oil?

Why is a dependence on Canada, Mexico, Venezuela or Saudi Arabia for oil a greater peril than a reliance on China and Asia for vital necessities upon which our prosperity and military depend?

A week ago, the Washington Times ("Volcker Blames Recession on Trade Imbalances") reported that ex-Fed Chair Paul Volcker told Congress the "massive trade-related imbalances in the United States economy were the source of the financial crisis."

Pressed by Sen. Chris Dodd, Volcker said, "Go back to the imbalances in the economy. The United States has been consuming more than it has been producing for many years."

What "imbalances" was Volcker referring to? Perhaps these.

These statistics, these realities -- factories closing in the United States, manufacturing jobs being outsourced in the millions to China and Asia, enormous, endless trade deficits in goods -- testify to a painful truth: America is a receding and declining world power.

And in dealing with this systemic crisis, Obama's stimulus package is as irrelevant as were the Bush tax cuts.

How do we correct those "trade-related imbalances" of which Volcker spoke? We must export more and import less, save more and spend less, produce more and consume less. We need to emulate the ants and behave less like the grasshoppers of summer.

But how do you tell that to two generations of Americans who have been raised in an era of entitlement?

But how do you tell that to Americans indoctrinated in the hoary myth that Reed Smoot and Willis Hawley caused the Great Depression and anything that sounds like America First risks a rerun of the 1930s?