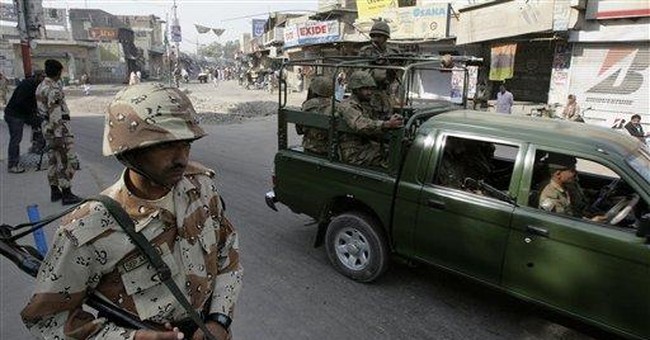 "Things are in the saddle, and ride mankind."

Emerson's couplet comes to mind as the New Year opens with Pakistan, the second largest Muslim country on Earth, in social and political chaos, trending toward a failed state with nuclear weapons.

Former Prime Minister Benazir Bhutto, whom the White House pressed to return home from exile to form an anti-Islamist alliance with President Pervez Musharraf, is dead, assassinated on the second try in two months.

Her 19-year-old son, who has spent most of his life outside the country, is now the declared leader of her Pakistan Peoples Party but is remaining at Oxford. Her husband, widely regarded as the bag man of the Bhutto family, is playing regent, denouncing the Pakistan Muslim League with which Musharraf is affiliated as a "murderers' league."

As riots ravage the country, the PPP is demanding that the Jan. 8 elections go forward and calling on the nation to repudiate Musharraf and bring the PPP to power -- in her memory.

Nawaz Sharif, a two-time prime minister like Bhutto who presided over Pakistan's test of an atom bomb, who is close to the Islamists, who was also ousted for corruption, and who is detested by Musharraf, had declared an election boycott. Now his party, too, is urging that the elections go forward. Sharif wants Musharraf out and himself in.

If Musharraf postpones the elections, or they are not regarded as free and fair, the whole nation could erupt. If he does not postpone the elections, he will almost surely be repudiated.

Revealed by all this is the inability, if not the impotence, of America to assure a desired outcome in a nation whose support is indispensable if we are not to lose the war in Afghanistan, now in its seventh year.

Moreover, the reactions of some U.S. presidential candidates suggest they are not ready to run this country, let alone Pakistan. After Bhutto's assassination, Bill Richardson called on Musharraf to resign. Hillary Clinton has suggested that Musharraf could be toppled and demanded that he submit to an outside investigation of the murder of Benazir Bhutto.

Nancy Pelosi is suggesting a cutoff in U.S. aid if there is no outside investigation and demanding the White House ensure that Pakistan's elections are "free and fair." Perhaps the Pakistanis will demand observers this year in Florida and Ohio.

But if Musharraf stands down, who steps in? Do we know? And if elections go forward, are we ready to accept any outcome?

After all, this is a country whose provinces bordering on Afghanistan, the Northwest Frontier and Baluchistan, are ruled by a coalition of Muslim parties sympathetic to the Taliban. Tribal regions along the border play host to the Taliban and perhaps Osama himself. Elements of Pakistan's military and intelligence services are Islamist. The nuclear proliferator A.Q. Khan and Osama are far more popular than Musharraf or Bush. Lose Pakistan in the war against al-Qaeda and the Taliban and you lose the Afghan war.

In recent elections in the Near and Middle East, many of them called at the insistence of President Bush, the winners were Hamas, Hezbollah, the Muslim Brotherhood, Moqtada al-Sadr and Mahmoud Ahmadinejad.

What are the primary U.S. interests today in Pakistan? That its nuclear weapons remain in secure and friendly hands and that Pakistan remains an ally in the war against al-Qaeda.

Whatever happens in the elections Jan. 8, or later, the United States should retain close ties to Pakistan's military. As Rome's emperor Septimus Severus counseled his sons on his deathbed, "Pay the soldiers. The rest do not matter."

But the United States must begin now to look at the longer term.

It seems clear that we are so hated in that country that any leader like Bhutto, seen as a friend and ally to the United States, is ever at mortal risk. Musharraf has himself been a repeated target of assassins.

Second, our ability to influence events is severely limited. What does democracy mean in a country where 60 percent of the people are illiterate and parties are fiefdoms of families and political instruments of religious radicals?

As Burke reminded us, "It is ordained in the eternal constitution of things that men of intemperate minds cannot be free. Their passions forge their fetters."

We need to ask ourselves hard questions. Has the blood we have shed in Afghanistan and Iraq, the hundreds of billions we have plunged into these wars, and into foreign aid, made us safer? Has it made us more friends than enemies? Perhaps, as is seen today in Anbar, locals are better at dealing with al-Qaeda than even our American soldiers.

Russia, China, India, and Japan are closer to Pakistan than we. Yet, none of them feels the need we apparently do to be so deeply enmeshed in her internal affairs.