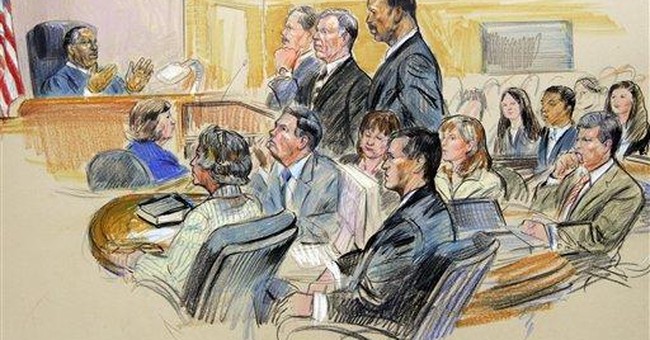 Why did Bush do it?

Why did he suddenly barge into the legal process and erase the entire 30-month sentence of Scooter Libby?

For, from his own statement, Bush found the act deeply distasteful.

In that statement, Bush calls Libby's crimes "serious convictions of perjury and obstruction of justice." He praises Patrick Fitzgerald as "a highly qualified professional prosecutor who carried out his responsibilities as charged."

Bush indicated no disagreement with the verdict.

"[A] jury of citizens weighed all the evidence and listened to all the testimony and found Mr. Libby guilty of perjury and obstructing justice. . . . our entire system of justice relies on people telling the truth. And if a person does not tell the truth, particularly if he serves in government and holds the public trust, he must be held accountable."

Bush went on to detail the punishments that will stand.

"My decision to commute his prison sentence leaves in place a harsh punishment for Mr. Libby. The reputation he gained through his years of public service and professional work in the legal community is forever damaged. . . . The significant fines imposed by the judge will remain in effect. The consequences of his felony conviction on his former life as a lawyer, public servant and private citizen will be long-lasting."

This reads like the preamble to Judge Reggie Walton's imposition of the two-and-a-half-year prison sentence. Yet, this is contained in Bush's explanation for wiping out Libby's entire sentence. It is mystifying.

Why did Bush do it? Why did he intervene at all? Why now? Why not let Scooter go to jail and commute the sentence at Christmas, if he thought it excessive?

The suddenness of Bush's action is easiest explained. Hours before he tossed his commutation statement to the press, the court had turned down Libby's last request that he be allowed to stay out of prison as his appeal is heard. Bush's need to act was obvious. Scooter was on his way to prison.

But why did Bush rush to spare him even one day behind bars?

The first is that Bush capitulated to intense pressure from the neoconservative commentariat led by The Wall Street Journal and The Weekly Standard.

To these folks, Scooter is no felon. Scooter is a hero. In the neocon network, Scooter was the pivot man in the veep's office moving the cherry-picked intel on Saddam's WMD, Saddam's nukes, Saddam's ties to 9/11 and al Qaeda to a collaborationist press as determined as he was to smash Iraq and Iran, secure Israel and control the Middle East.

So what if Scooter lied to cover up the White House campaign to carve up Joe Wilson? If Scooter did it, good Straussian that he is, he did it for the highest of motives in the noblest of causes.

To the neocons, Scooter is, in Ahmed Chalabi's phrase, "a hero in error," one of the boys. And as they saved him from the slammer, they will not stop until they secure him a pardon -- to which Bush has now opened the door.

The second explanation is that Vice President Cheney went to Bush, closed the door, and asked, as a personal favor, that he spare Cheney's faithful friend and loyal aide the disgrace and pain of prison. And Bush did this distasteful and shameful act at the behest of a vice president to whom he feels an immense debt.

The third explanation is that Cheney, and perhaps the president, fears that if Scooter goes to prison, and is staring at disgrace and 30 months away from friends and family, he may think he has been abandoned by people whose secrets he kept at the cost of reputation and freedom. An idle mind being the devil's workshop, Scooter might sit down and write a book, or phone "Bulldog" Fitzgerald and tell him he just remembered something.

Whatever the motives of President Bush, this was a radical not a conservative act. Whoever pressured Bush to wipe out Scooter's sentence was more a friend of Scooter than a friend of Bush. For the president has damaged his reputation as a just ruler, so Scooter could elude what other men have to face.

Will the student deferments for these fellows never end?

The act reeks of cronyism. The perception is that Scooter Libby got preferential treatment, a get-out-of-jail-free card because he was chief of staff to Cheney and assistant to Bush.

That perception is correct.

Because of whom he knew, Scooter got preferential treatment, big-time. The Godfather took care of the consigliere.

Nothing new. After all, one recalls that the attorney who rustled up a pardon for Marc Rich from Bill Clinton was also a Beltway hustler by the name of Scooter Libby. The insiders take care of their own.

And that is how the game is played in the big city.