The Regime Against the Nation 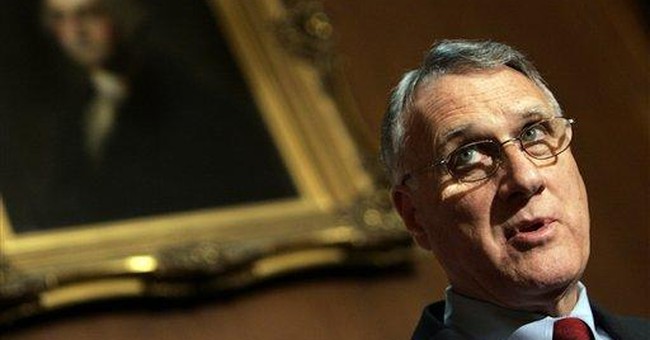 Last week, in one of the great uprisings of modern politics, Middle America rose up and body-slammed the national establishment.

The Bush-Kennedy-McCain amnesty for 12 million to 20 million illegal aliens, and for the businesses that have hired them -- a bill backed by La Raza and the U.S. Chamber of Commerce, The Wall Street Journal and The Washington Post -- went down to crushing defeat.

Majority Leader Harry Reid fell 15 votes short (45 to 50) of shutting off debate. Like the rout of the Dubai ports deal, the victory was achieved by a firestorm of public protest, reflected in millions of phone calls and e-mails, and citizens marching to town meetings.

The capital's capitulation to the country was unprecedented and astonishing. Not two weeks earlier, the amnesty provision of the bill had been supported by more than 60 senators.

But opponents of this bill, which would reward mass criminality with mass amnesty and eventual U.S. citizenship, ought not rest.

For President Bush is coming back to resuscitate the monster, and this bill has more support in the Senate than the 45 votes it got Thursday. Some Republicans and Democrats who voted not to shut off debate are privately committed to amnesty, if they can be given political cover and face-saving amendments to take home.

Sen. John Kyl is not necessarily wrong when he says, "All we have to do on the Republican side is sit down with those who have amendments, get those amendments in a reasonable package, not too many, but enough so all of the members can say they had their chance."

Kyl reads his party right. For the GOP is the political instrument of K Street and Corporate America -- the folks who fund the party and finance the campaigns. And the No. 1 issue of Corporate America is Bush-Kennedy-McCain. For not only does it give blanket amnesty to businesses for hiring illegals, it legalizes the illegals and ensures Corporate America an endless supply of cheap immigrant labor.

The fundamental reason this bill is not dead is that its authors and backers will never quit. For this legislation is part of a larger agenda of a large slice of America's economic and political elite.

What is that agenda?

They have a vision of a world where not only capital and goods but people move freely across borders. Indeed, borders disappear. It is a vision of a "deep integration" of the United States, Canada and Mexico in a North American Union, modeled on the European Union and tied together by super-highways and railroads, where crossing from Mexico into the United States would be as easy as crossing from Virginia into Maryland. It is about the merger of nations into larger transnational entitles and, ultimately, global governance.

This immigration bill is but a piece of a great global project already far advanced. In 1993, a majority of Americans opposed the NAFTA trade deal with Mexico because they did not believe the propaganda and feared that, as Henry Kissinger said, it represented the architecture of a new world order.

More than a dozen years have elapsed. And the results? Contrary to the promises, our trade surplus with Mexico did not grow. It vanished. In 13 years, we have run $500 billion in trade deficits with Mexico. Last year's $60 billion was the largest ever. Mexico now exports more cars, trucks and auto parts to the United States than we export to the world.

What NAFTA did was enable U.S. companies to close their plants here, fire their American workers, and move their factories and jobs to Mexico, while Mexico continued to export its poor to the United States.

What is the hidden agenda of the global companies, which evolved out of what were once great American companies?

They want a limitless supply of low-wage immigrant labor and an end to penalties for hiring illegals. They want the freedom to shut factories here and move them to nations where wages are low, benefits nonexistent and regulations lax. They want to be able to move products back to the United States free of charge. They want to be rid of their American workers, but keep their American consumers.

It is about globalism -- and about greed. And, as the Bible says, love of money is the root of all evil. But they have a problem. The nation has begun to awaken to the reality that the vision of the global corporation and the transnational elite cannot be realized without the death of the American republic. And so they are in a fight that is long overdue.