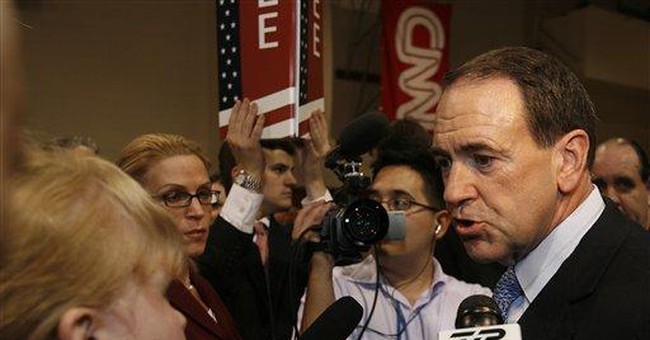 In July 1861, the Union Army marched out of the capital to meet the Confederates forming up at Manassas. Washingtonians packed picnic lunches and followed to enjoy the rebel rout.

By nightfall, the Union Army was straggling back to the city. Stunned and panicked spectators had already returned to report the defeat of Gen. McDowell's forces. What the First Battle of Bull Run meant was that the rebels were stronger and tougher than anticipated, and Mr. Lincoln's war was not going to be easy or short.

In Republican presidential politics, the Iowa straw poll, held the August before the January caucuses, serves the role of Bull Run. It is the first major skirmish of the presidential season and registers the appeal of a candidate to the nation's first voters, the strength of his organization and the extent of his financial resources,

Thus, it is a stunning development that Rudy Giuliani, then John McCain, just pulled out of the Iowa straw poll on Aug. 11.

What seems to have happened is this.

Having spent less time in Iowa than McCain or Mitt Romney, with an organization regarded as feeble compared to theirs, Rudy feared a crushing defeat on Aug. 11 that would have destroyed his aura as front-runner. Rather than be humiliated, he elected to forfeit the game.

That left McCain nothing to gain on Aug. 11, but a lot to lose. Now, he could not claim to have defeated Rudy, his main rival, but he would risk an embarrassing loss to Romney, who leads in many Iowa polls and whose organization is said to be the strongest in the state.

Bottom line: Mitt Romney is now the favorite to win the Iowa Caucuses in January, eight days before New Hampshire.

And recall: John Kerry's three-point victory in Iowa in 2004 propelled him to victory in New Hampshire and virtually every other primary save South Carolina and Oklahoma.

There is a real question today whether Rudy, whose liberal stance on gay rights and right-to-life is anathema to most Iowa Republicans, will even play in the caucuses. Why risk a death blow to his candidacy in what may be one of Rudy's weakest states?

McCain has to consider whether he, too, wants to risk a defeat there in January, which could be fatal to his candidacy, or whether he is not better advised to await Romney in New Hampshire, the way he did George W. Bush in 2000, when McCain -- wisely, it turned out -- ducked Iowa altogether.

The withdrawal of Rudy and McCain not only dims their luster, it puts pressure on Romney to run up the score on Aug. 11 and show intimidating strength. And it presents an opening for a second-tier candidate -- former Govs. Mike Huckabee, Tommy Thompson and Jim Gilmore, Reps. Duncan Hunter, Tom Tancredo and Ron Paul, and Sen. Sam Brownback -- to break out of the pack.

Whoever now runs second to Romney in the straw poll -- especially if he can put distance between himself and No. 3 -- will begin to attract attention from the media and see his contributions increase.

The McCain-Giuliani cop-out will cause Fred Thompson to review his strategy. Wisely, he has passed up the straw poll. This would have cost him hundreds of thousands of campaign cash for a tent, tickets, food and buses at the all-day affair in Ames, and availed him nothing. For his late entry would have precluded a first- or second-place finish.

Thompson now has to ask himself whether he should even go to Iowa -- or do as McCain did in 2000, skip the state and take his stand in New Hampshire.

Writing off Iowa makes sense for Thompson. For it is hard to see how he could make up for the lost six months he has already ceded to the other candidates in organizing the state. Most Iowa political activists have already committed to other candidates.

The same would hold true for Newt Gingrich, should he decide to run, which appears unlikely now that Fred Thompson has moved into the vacuum left by conservative dissatisfaction with the front-runners. But should Newt get in, it would make no sense for him to go to Iowa and play against a deck that seems stacked for Romney. Better to wait for New Hampshire.

Neither the Iowa straw poll nor the caucuses are necessarily decisive. Sen. Phil Gramm won the straw poll in 1996. George H.W. Bush defeated Ronald Reagan in the caucuses of 1980.

But the Iowa Caucuses have always been important, and often crucial.

Mitt Romney has been robbed of a triumph over his two main rivals on Aug. 11. They evaded the trap he had set. But in running Rudy and John out of Ames, Romney has shown real strength, and must now be the favorite to take Iowa in January and probably is the man to beat in New Hampshire.