Time to Split the Blanket 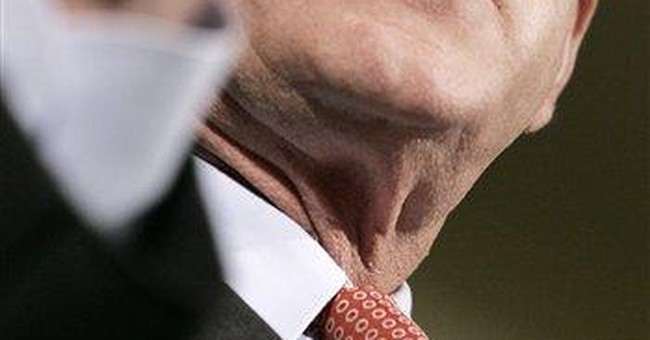 "I hold it that a little rebellion now and then is a good thing, and as necessary in the political world as storms in the physical."

So said Jefferson. It would appear to be time again for a little rebellion in the Grand Old Party -- this time against George II.

For President Bush has attacked his own loyalists for a lack of patriotism. "If you don't want to do what's right for America," he said of opponents of the Bush-Kennedy immigration bill, "if you want to scare the American people, what you say is the bill's an amnesty bill. That's empty political rhetoric, trying to frighten our citizens."

But if the 12 million to 20 million illegal aliens are instantly legalized, what other term is there to describe that than amnesty?

Not only are opponents not doing "what's right for America," their courage is in question: "People in Congress need the courage to go back to their districts and explain exactly what this bill is all about. The fundamental question is, will elected officials have the courage necessary to put a comprehensive immigration plan in place."

Where, one wonders, was "Bush's Brain," Karl Rove?

For, worse than a crime, this attack on his base was a blunder. The people Bush is savaging -- columnists, commentators, talk-show hosts, congressmen fighting his bill -- have been the front-line troops in his fight to sustain funding for the war.

And if there were any doubt whom Bush had in mind, his surrogate, Linda Chavez, cleared it up:

"Unfortunately, among this group is a fair number of Republican members of Congress, almost all influential conservative talk radio hosts, some cable news anchors -- most prominently, Lou Dobbs -- and a handful of public policy 'experts' at organizations such as the Center for Immigration Studies, the Federation for American Immigration Reform, NumbersUSA, in addition to fringe groups like the Minuteman Project."

"Why would they speak so insultingly, with such hostility, of opponents who are concerned citizens? And often, though not exclusively, concerned conservatives?" asks Noonan.

Because, Peggy, down deep where they live, they don't like the right, never did and have always sought to be seen by the Big Media as the progressive children of a dysfunctional and retarded family.

Bush's attack on the motives and character of conservatives tell us it is Goldwater-Rockefeller time again -- time to split the blanket. Conservatives need to declare their independence of Bush and to repudiate Bushism as the philosophy of their movement and party.

While Bush's court appointments, setting aside the Harriet Miers mess, have been superb, while his tax cuts have been Reaganite, while his stand on traditional values is courageous, beyond is a vast wasteland as far as the eye can see.

His free-trade zealotry has led to five straight record trade deficits. While America's economy is now growing at under 1 percent, China's is booming at 10 percent. His refusal to defend and secure the borders is well-nigh impeachable. His compromises with Teddy Kennedy on No Child Left Behind have doubled the size of the Department of Education without any appreciable gain in test scores. His "Big Government Conservatism" marks him as his father's son, not Reagan's heir. In Ward Connerly's courageous battle against reverse discrimination, the Bushes have all been on the other side.

His bungled war of choice on Iraq has left us with 3,400 dead, 25,000 wounded, hundreds of billions deeper in debt and an Army on the point of breaking. Relations with Europe, Russia, and the Arab and Muslim world are worse than they were when he took office.

His clandestine drive to merge Mexico, America and Canada in a "Security and Prosperity Partnership of North America" -- a North American Union modeled on the European Union -- entails the loss of sovereignty and end of the republic as we know it.

The damage Bush has done to his party is beginning to rival that of Herbert Hoover. If the Clintons were doing this, would conservatives be mute? Time to lock and load.