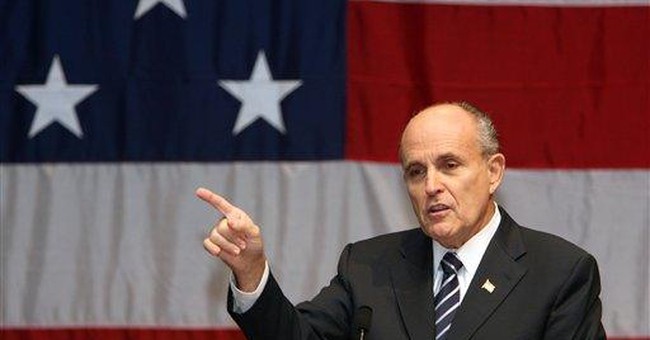 "After months of conflicting signals on abortion, Rudolph W. Giuliani is planning to offer a forthright affirmation of his support for abortion rights in public forums, television appearances and interviews in coming days," writes The New York Times.

For Reagan's party was a pro-life party. Life defined the man. Life defined the movement he led. It was Reagan who insisted that his speechwriters include mention of the life issue in every State of the Union. At one lunch with senior staff, Reagan choked up as he read a letter from a woman who said she daily thanked God she had not had an abortion 45 years before, as she had considered doing, as now the son she had borne was taking care of her in her old age.

Since Reagan, whatever GOP nominees have believed privately, they ran as pro-life candidates.

If Rudy were to be nominated as a pro-choice Republican, millions would stay home or vote third party. For it was the life issue that brought them into the party, or kept them there when they disagreed with the party on almost everything else.

Nor is Rudy's embrace of the pro-choice position going to stop the questions -- like the ones he kicked all over the stage at the Reagan Library.

Asked if he would like to see Roe v. Wade overturned, Rudy allowed as how it would be "OK" with him if it was and OK with him if it wasn't. Though he "hated" abortion, he had funded it in New York. If others don't want to fund it, that's OK with Rudy, too.

Rudy, in short, is treating the issue like a ban on smoking in bars.

A Rudy nomination would bring the culture war right down onto the floor of the Republican convention. For Rudy is not only pro-choice on abortion, he has supported affirmative action, favored amnesty for illegals, turned New York into a sanctuary city where the NYPD was forbidden to ask arrestees their immigration status, has championed gay rights, marched in gay pride parades -- once not all that far behind the big float of the North American Man/Boy Love Association.

He is thrice married, and he used to bring his main squeeze into Gracie Mansion while still married to the mother of his son. When she threw him out, he was taken in by a couple of gay friends.

And Rudy is now suiting up to lead the family values party into battle? Dr. Dobson, call you office.

Rudy's cover on the abortion issue has been his promise to appoint strict constructionists to the Supreme Court, like Antonin Scalia, John Roberts, Samuel Alito and Clarence Thomas, a crucial commitment that would be a huge factor in 2008. For the court is on a knife's edge, and the replacement of the octogenarian John Paul Stevens with a Scalia type could mean the end of Roe v. Wade.

But Rudy's commitment, welcome as it is, raises a question. What does Rudy Giuliani really believe?

If Rudy is honestly pro-choice, how can he name justices certain to overturn Roe v. Wade, thereby restricting choice to millions of women? And if he intends to nominate justices like Roberts and Scalia, why would any pro-choicers vote for him?

Rudy's pro-choice, pro-Scalia stance seems intellectually incoherent and politically inexplicable. He loses part of the pro-life vote and all the pro-choice vote? This is smart politics?

Moreover, simply because Rudy declares himself pro-choice does not mean the issue goes away. Rudy's opponents will bring it up again and again in Iowa, New Hampshire and South Carolina. The press will go straight to the contradiction between supporting "a woman's right to choose" and supporting justices who would abolish a woman's right to choose.

And, now, His Holiness has weighed in. Angered over a vote by Mexico to permit first-trimester abortions, Benedict XVI said on his flight to Brazil that the Catholic legislators who had voted to legalize abortion had excommunicated themselves and should be denied Holy Communion.

This suggests the Vatican will not be silent on Rudy's bid to become the first Catholic Republican president. Nor will Cardinal Edward Egan of New York or Archbishop Donald Wuerl of Washington -- if the latter has any interest in a cardinal's hat.

With the national press trailing candidate Rudy to church every Sunday, quizzing the parish priest and local bishop as to whether Rudy will be denied communion, this should bring the religious issue back to presidential politics as it has not been since 1928, when Democrats nominated another New York Catholic named Al Smith.