To Die For Tallinn 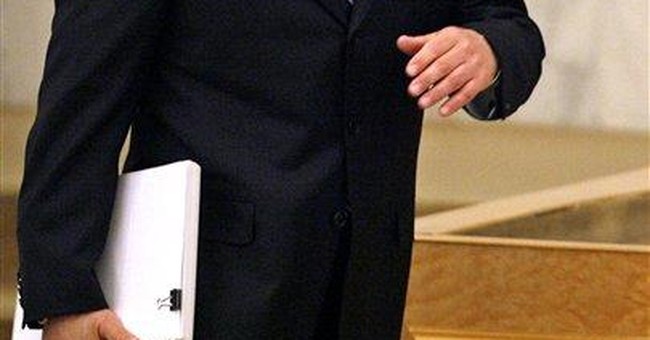 All week, young toughs in Moscow have besieged the Estonian embassy to harass Ambassador Marina Kaljurand. Her bodyguards had to use a mace-like spray to drive back the thugs, who call Estonia a "fascist country." Estonian diplomats and their families are being pulled out of Moscow and sent home.

Relations between the countries are about to rupture, if the Kremlin does not reign in the bully-boys.

Behind this nasty quarrel is the decision by Estonia to move the giant statue of a Red Army soldier, and the remains of Soviet soldiers, from the center of its capital, Tallinn, to a military cemetery. In Tallinn, patriots and nationalists have clashed with citizens of Russian ancestry over the perceived insult to Mother Russia and the "liberators" of Estonia from the Nazis.

Both points of view in this quarrel are understandable.

To Russians, who lost millions of their grandfathers, fathers and uncles in the Great Patriotic War, the Red Army liberated Europe from Nazism, and their sacrifices ought to be honored. And the Estonians are a pack of ingrates.

To Estonians, the Red Army did not liberate anyone. Having won their independence from the Russian Empire in World War I, they were raped by Russia -- to whom they had been ceded as part of the Hitler-Stalin Pact. In June 1940, the Red Army stormed into the three Baltic republics, butchered the elites and shipped scores of thousands off to Stalin's labor camps never to be seen again.

While the Soviets were expelled from the Baltic republics by the Germans in 1941, they returned in 1944 and held the Baltic peoples in captivity until the Evil Empire collapsed. It was only then that Estonia regained her independence and freedom.

Why should Estonians honor a Red Army that brutalized them and, after driving out the Germans, re-enslaved them for half a century?

Why should this issue be of interest to America?

If President Putin decide the Estonians need a lesson, and sends troops to teach it, the United States, under NATO, would have to treat Russian intervention in Estonia as an attack upon the United States, and declare war on behalf of Estonia.

So we come face to face with the idiocy of having moved NATO onto Russia's front porch, and having given war guarantees to three little nations with historic animosities toward a nuclear power that has the ability to inflict 1,000 times the destruction upon us as Iran.

Latvia, too, is now a member of NATO. And Latvia, too, has a quarrel with Moscow over its treatment of the descendants of those Russians whom Stalin moved into Latvia to alter its ethnic character. Their children and grandchildren have grown up in Latvia, and know no other home, though they are unwelcome to ethnic Latvians.

Settling these quarrels is essential to peace in Europe. But the notion that Russian intervention in a Baltic republic should be met by a U.S. declaration of war, or any attack upon a nation with thousands of atomic weapons, is the definition of insanity.

Nor are these the only quarrels we have with Putin's Russia that could explode into full-blown crises. Washington has persuaded the Czech Republic and Poland, two former Warsaw Pact countries, to accept radars and missiles for a U.S. anti-missile system.

If the Russia-baiters in this capital have their way, Ukraine and Georgia will also be brought into NATO. That would commit us to go to war with Russia over control of the Crimean peninsula and the Russian-speaking Donbass of eastern Ukraine, and over the birthplace of Stalin and who should control South Ossetia and Abkhazia.

"Moscow would not dare intervene in the Baltic republics!" comes the retort. Perhaps not. But the Russians are now fiercely nationalistic and anti-American. And it is always a mistake for a great power to cede to a minor power the ability to draw it into a great war. Just as it is always a mistake to hand out war guarantees one cannot honor.

In March 1939, Britain gave a war guarantee to Polish colonels who had not requested it, a guarantee Britain had no way of fulfilling. The war that followed cost Britain her empire and Poland 50 years of freedom.

In August 1914, King Albert of Belgium informed King George V that the Kaiser's troops had crossed his border. He invoked a treaty assuring Belgian neutrality that the British had signed -- in 1839!

So, Britain declared war, and 700,000 Brits perished in the Great War that hurled the West onto its present path of self-destruction.

And the march of folly continues on.