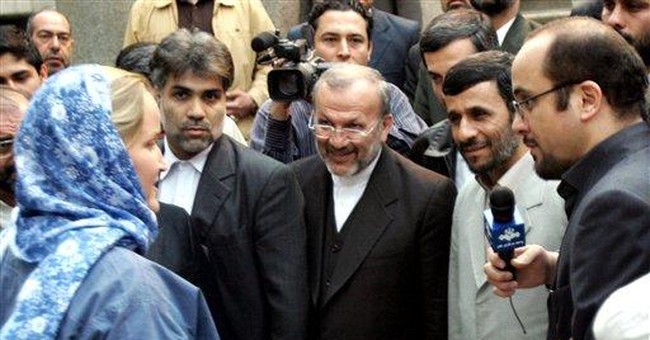 The Easter pardon by Iran's Mahmoud Ahmadinejad of the 15 British sailors and Marines, seized by Iranian Revolutionary Guards in waters off the Iraqi coast two weeks ago, ends the crisis.

And as the beaming smile of President Ahmadinejad while he graciously accepted apologies from the sailors and Marines testifies, there is no doubt as to who won the showdown. Among Iranians, for whom love of the Brits is an acquired taste, Ahmadinejad is the victor. His position inside Iran, a subject of speculation, is surely stronger today.

But his victory and that of the Revolutionary Guards comes at a cost to Iran, which showed itself to be a state willing to engage in hostage-taking and show trials as a negotiating tactic. Across the Middle East, there was no broad support of Iran. Even in Iran itself, there was nothing like the wild enthusiasm of the hostage crisis of 1979-1981.

As for the British military, however, it has sustained a humiliation.

What kind of rules of engagement were these Marines operating under to permit themselves to be surrounded, captured and disarmed without firing a shot? What kind of training did they have? How was it that, in days, if not hours, some were parroting the storyline fed them by their captors -- that they regretted having violated Iranian territory and wished to express remorse. As yet, there is no evidence any were abused or tortured.

The episode reveals the decline of once-Great Britain.

What could today's Britain have done? Unlike the Falklands War of 25 years ago, the Royal Navy is not what it was, and Tony Blair is not Margaret Thatcher. The Brits may have the nuclear weapons to destroy Iran. In conventional power, they are like the rest of the European Union -- bantamweights, at best.

Knowledge of this must have been what the Iranians were banking on. For, no matter the outcome, Tehran took a risk. The Iranians were surely aware that when Hezbollah kidnapped two Israeli soldiers after a border battle, they brought upon themselves and Lebanon five weeks of air and ground war.

Among the risks Iran took was that the British Marines would fight, not surrender. Blood could have been shed, casualties taken, and Britain might have retaliated, forcing Iran to fight. That would almost surely bring U.S. intervention on behalf of its ally, giving Bush an opening to do what he is contemplating, if not preparing: launching air and naval strikes on Iran's nuclear facilities.

Why, then, did the Iranians seize and hold the Brits, then suddenly let them go?

One explanation is that they are sending a message.

While they do not want war with us, they do not fear it to such an extent that they will permit themselves to be pushed around. You hit us, we hit back. But if you engage us diplomatically, rather than disrespect and threaten us, progress is possible in getting what your want. That, at least, is what the Iranian behavior seems to suggest.

For Iran was provocative at first, conciliatory at the end. And if the Iranian Revolutionary Guard truly wanted to put the Brits on trial, somebody overruled them. The Ayatollah? Ahmadinejad himself?

The United States should test again, via back channels, whether Iran is willing to suspend enrichment of uranium in return for a U.S. suspension of sanctions. For time is not on our side. Iran's ability to enrich uranium to weapons grade, however limited today, improves every month. It does not diminish.

And while war would be a calamity for both countries, incidents are increasing that could bring us to war, the latest being the seizure of the Brits.

In recent months, U.S. forces have, on two occasions, seized Iranians inside Iraq. Iraqis close to the U.S. military bagged another. He was released the day before the Brits were let go. Now, the U.S. military has permitted Red Cross visits to five Iranians seized in Irbil.

America has, in turn, charged elements of the Iranian military with providing extra-lethal IEDs, the roadside bombs that have killed and wounded so many of our troops.

Ms. Pelosi might thus hurry home from Saudi Arabia, where she has been instructing the Wahabis on women's rights, and reintroduce that House resolution declaring that, before President Bush can take his country to war against Iran, Congress must first authorize it.