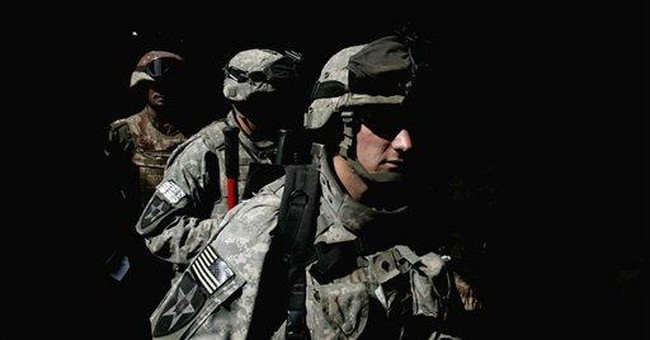 "Whatever happens in Iraq, retreat from the world is not an option," wrote Financial Times columnist Philip Stephens last weekend.

"The implication of this is obvious," says Stephens.

"We can proudly declare ourselves isolationists, resolve to eschew 'imperialist adventures,' decry liberal interventionists such as Britain's Tony Blair and damn the neoconservatives around U.S. President George W. Bush. But, one way or another, the West cannot avoid getting involved. On this, moral impulse and hard-headed interests are as one."

We are fated to intervene forever. "The reality of interdependence of a world shrunk by globalization cannot be wished away."

Put me down as not so sure. For if America is defeated in Iraq, as we were in Southeast Asia, who will ever again intervene in the Middle East?

As Stephens writes, Europe's "eternal role" seems to be that of the "concerned bystander" to disasters anywhere. And, revisiting the 20th century, the United States did not declare war on the Kaiser's ally Turkey in 1917, despite the Armenian massacres. Nor did we did confront Stalin over genocide in the Ukraine. FDR recognized Stalin's regime as it perpetrated that holocaust. Nor did we intervene to halt Mao's slaughter and starvation of millions of Chinese.

America looked on during Pol Pot's genocide. Clinton stood aside in Rwanda. No one is calling for the 82nd Airborne to be dropped into Darfur.

No matter, says Stephens, the West cannot abide the emerging new world disorder. But, again, that begs the question: Who is going to intervene?

If Iraq and Afghanistan, despite the U.S. investment in blood and treasure, end in defeats, who does Stephens think is going to send troops to rescue imperiled "liberal democratic values"?

In his second inaugural, President Bush declared that America's national goal is now to "support the growth of democratic movements and institutions in every nation and culture, with the ultimate goal of ending tyranny on earth."

Are Americans still willing to support that utopian mission with blood and billions of dollars?

In a Gallup poll this year that posed the question, "Should the United States try to change a dictatorship to a democracy when it can, or should the United States stay out of other countries' affairs?" -- by near five to one Americans said, "Stay out." Fifteen percent said "yes" to the Bush commitment. Sixty-nine percent said to stay out of the internal affairs of other countries.

Columnist David Broder cites a Penn, Schoen poll conducted Jan. 30 to Feb. 4. By 58 percent to 36 percent, respondents said, "It is a dangerous illusion to believe America is superior to other nations; we should not be attempting to reshape other nations in light of our values."

"By an even greater proportion -- almost three to one," adds Broder, "they say the main goal of American foreign policy should be to protect the security of the United States and its allies, rather than the promotion of freedom and democracy."

By 70 percent to 27 percent, Americans agreed, "Sometimes it's better to leave a dictator in charge of a hostile country, if he is contained, rather than risk chaos that we can't control if he is brought down."

By 58 percent to 38 percent, American agreed with the statement that "if negotiating with countries that support terrorism like Iran and Syria will help protect our security interests, the U.S. should consider negotiating with them."

"Idealism"? That is true only if one buys the proposition that refusing to talk to enemies and fighting unnecessary wars is idealism rather than folly. FDR and Truman talked to Stalin, Ike invited the Butcher of Budapest to Camp David, Nixon went to Beijing to talk to Mao, Reagan accepted Gorbachev's invitation to Reykjavik during the Soviet war in Afghanistan. Were all these men devoid of idealism?

Stephens believes the successors to Bush and Blair will find they have no option but to intervene to prevent the new world disorder.

Perhaps. But given the rage and revulsion Americans feel at having been stampeded into Iraq and pinioned in Baghdad, unable to stop the bleeding but unwilling to walk away in defeat, the American appetite for intervention has probably been sated for a long, long time.

U.S. global hegemony is history. Like every nation, America must now choose -- between what is vital and worth fighting for, and what may be "idealistic," but is not worth a war.

Not long ago, America produced 96 percent of all she consumed and was the most self-sufficient republic in history. With statesmanship and sacrifice, we can become so again. With leaders like we once had, we can chuck the empire. For what good has it done us?