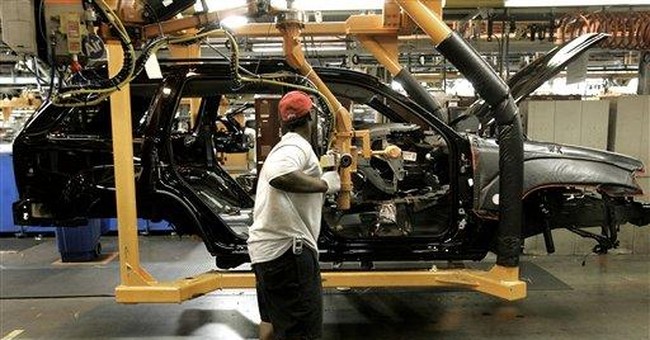 On Valentine's Day, Chrysler sent a bouquet to its North American workers. Eleven thousand manufacturing jobs will be eliminated in the next 24 months -- 9,000 in the states and 2,000 in Canada -- and 2,000 white collar workers will be let go, permanently.

The SUV assembly plant in Newark, Del., will be closed. The Warren, Mich., truck plant and South St. Louis assembly plant will each lose one of their two shifts. Earlier, Ford posted the largest loss of any company in history, $12.7 billion, breaking GM's record $10.6 billion loss in 2005.

Toyota, having swept by Chrysler and Ford, is challenging GM for first in sales in the U.S. market. When we were growing up, U.S. automakers had the entire U.S. market to themselves and dominated the world market.

How is Japan succeeding?

First, the Japanese make fine cars. Second, Japan manipulates its currency to keep it cheap against the dollar, to keep the price of Japanese autos below comparable U.S. models. Third, Tokyo maintains a lock on its home market by imposing a value added tax on auto imports from America, and rebating that tax on autos and parts exported to America. This double-subsidy can give a Japanese car a 15 percent price advantage over a Ford or GM car in both markets.

Fourth, Japanese auto companies setting up plants here are free of "legacy costs" of pensions and health insurance for retired U.S. workers. For Japanese companies have almost no retired American workers. Legacy costs at GM, Ford and Chrysler must be factored into the price of every car.

Finally, there is the venerable practice of "transfer pricing." Japanese auto parts manufacturers overcharge U.S subsidiaries for parts. This cuts the profits of their U.S subsidiaries and thus reduces their U.S. corporate taxes. Profits are repatriated, virtually untaxed, to Japan.

Thus is Japan capturing America's auto market and bringing down the great companies that built the machines of war which brought down Japan's empire. Revenge is a dish best eaten cold.

To stay competitive in their own home market, U.S. manufacturers are closing down plants, laying off American workers and building their cars outside the United States.

The day before Chrysler's announcement, the Census Bureau trade figures were released. Charles MacMillion of MBG Information Services had them broken down before they hit the wires.

In 2006, the United States ran a deficit in traded goods of $836 billion, a fifth-straight world record. For manufactured goods, the U.S. trade deficit reached $536 billion, worsening from the 2005 record of $504 billion. Under President Bush, 3 million U.S. manufacturing jobs have disappeared -- one in every six.

To understand what is happening to Chrysler, Ford and GM, one need only glance at the trade figures in the auto sector. The United States ran a trade deficit in trucks, autos and auto parts of $144.7 billion.

If America continues on this course, where we have run up $4 trillion in trade deficits in manufactured goods since Bill Clinton took office, the end is predictable.

An eventual collapse of the dollar, making us a poorer nation. The shuttering of every U.S. factory that makes traded goods. A constant hemorrhaging of manufacturing jobs, now down to 10 percent of our labor force. An end of America's pre-eminence as the world's foremost industrial and technological power. An end to the Second American Century, as the Asian Century begins.

Everything some have been warning about for decades -- huge trade deficits, a falling dollar, de-industrialization, a rising dependence on foreigners for the vital necessities of our national life, diminished freedom of action concomitant with that dependency -- has come to pass.

The world is witnessing the passing of the United States as the greatest industrial power and the most self-sufficient republic the world had ever seen. Yet, no one acts. Why?

Ideology is one reason. Free-trade fanatics are like those devout Christians who will not undergo surgery, even if their malady is killing them. Second, there are the obtuse who simply cannot see that our "trade partners" have found a way around the rules and are skinning us alive.

Third, to gain and hold high office, candidates of both parties depend on the contributions of a monied elite, whose salaries, bonuses, stock options and golden parachutes depend on a rising share price, which means constantly cutting costs by moving production out of United States and getting rid of high-wage American workers.

There are rewards for economic treason.

Look for the Democrats to find a way to give Bush -- despite the astonishing record of trade failures documented above -- fast-track authority to negotiate still more such trade deals. Who takes the king's shilling becomes the king's man.