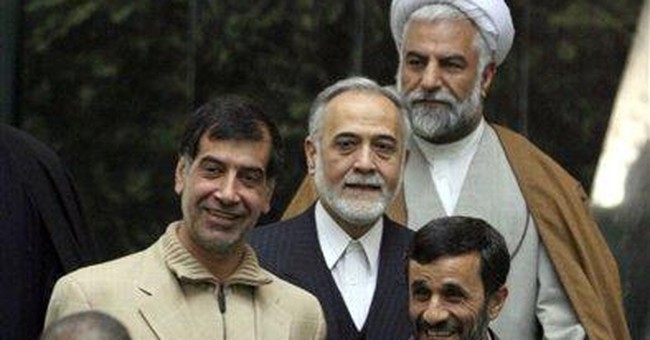 After a weekend in which 29 Americans died and the 82nd Airborne deployed in Baghdad, what the Iraq war will mean to the politics of 2008 becomes clear.

Hillary Clinton's early Saturday announcement of her exploratory committee was brilliantly executed and captured front page, cable and network coverage all weekend. But it was a decision forced upon her.

Barack Obama, the "rock star," has been poaching on Hillary's donor lists and offering Democrats, in the style of New York mayoral candidate John V. Lindsay in 1965 ("He is fresh, and they are all tired"), a post-Bush-Clinton-Bush politics that says, "Good-bye to all that."

John Edwards has pitched his tent in the Cindy Sheehan camp. The Sunday preceding Dr. King's birthday, he rose in New York City's Riverside Church, where King had denounced the Vietnam War, to decry President Bush's surge as "the McCain Doctrine," called for immediate withdrawal of 40,000-50,000 U.S. troops and threw down the gauntlet to Hillary, declaring, "Silence is betrayal."

By midweek, Hillary was out with her own plan for redeployment.

The Democratic nominee will likely be one of these three. In every national or Iowa-New Hampshire poll, they are first, second or third. But there is a wild card.

On Feb. 25, America will watch the Academy Awards, where the Oscar for best documentary will likely go to "An Inconvenient Truth." If Al Gore wins the Oscar, addresses the nation for two minutes on global warming and the war, then appears on Oprah, Leno, Letterman, Stewart and Colbert, a subsequent declaration of candidacy would put him in the top tier. And unlike Edwards and Hillary, Gore opposed the war in Iraq.

In the Democratic Party, the Iraq war is a lost cause that ought never to have been begun and any candidate who has not come to that position by February 2007 will not be in the hunt.

In the Republican Party, the war is less likely to bring about the unity Democrats will have achieved by year's end. For by summer's end, the surge will be over. While there may have been a temporary reduction in massacres by then, no one believes an additional 21,500 troops in a Texas-sized nation of 26 million can turn around a war Gen. Colin Powell says we "are losing" and Bush concedes "we are not winning."

Already, near a fifth of the Republicans in the Senate, including Chuck Hagel and presidential candidate Sam Brownback, have come out against the surge. The front-runners, Rudy Giuliani, John McCain and Mitt Romney, however, still back the president.

But while McCain is far out in front in raising money and lining up support, he is also the single national figure, beyond Bush and Dick Cheney, most identified with the least popular war in U.S. history. If McCain wishes to be president, it would be best for him for this war to be in its final act, one way or the other, by 2008.

If the war has been lost by then, as many believe it is already, McCain can say: Rumsfeld lost it because he fought it the wrong way, and we shall never do that again. But if the war is still going on, it will be the issue of 2008, and it is hard to see America voting to continue or embrace the "McCain Doctrine" and escalate by sending in 100,000 more troops.

The GOP is thus looking at a situation in 2008 where the party will be as divided as Democrats were with Eugene McCarthy, Hubert Humphrey, Bobby Kennedy and LBJ in 1968, while Democrats will be as united as the GOP was under Nixon. Had George Wallace, who got 13 percent, been out of the '68 race, Nixon would have won in a landslide.

Is there anything that might alter the course of events and affect the war picture by 2008? Indeed: a pre-emptive strike on Iran.

Should it occur, writes Wayne White, an intelligence officer at the State Department until 2005, "such action would likely involve not only taking out widely dispersed nuclear-related targets and nearby anti-aircraft defenses, but also portions of the Iranian air force assigned to defend these targets. And that's just for starters.

"In order to reduce Iran's ability to retaliate in the Persian Gulf, such a plan probably would also include taking out Iran's array of anti-ship missiles along the northern coast of the Gulf, its Kilo-class submarines, other naval assets and even some targets related to Iran's long-range missile capacity."

Is such an attack being considered? Nick Burns, No. 3 at State, was at the Herzileah Conference this weekend. "Iran is seeking a nuclear weapon -- there's no doubt about it," Burns told the Israelis. "The policy of the U.S. government is that we cannot allow Iran to become a nuclear weapons state."

Burns was cheered and echoed by ex-Defense Minister Shaul Mofaz: "The year of 2007 is the year of decisiveness. ... The free world doesn't have the privilege to drag its feet on Iran and hope for best."

Democrats failed to stop this war. Can they stop the next one? Or do they suspect and support what they think is coming?