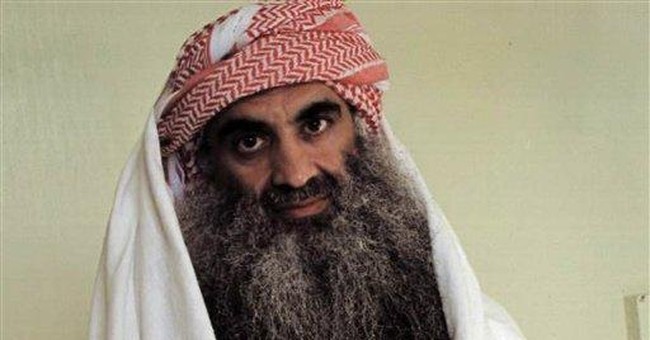 WASHINGTON -- The Obama administration has a nearly flawless record on the economy. When President Barack Obama or one of his senior minions, such as Treasury Secretary Tim Geithner, launches a rhetorical offensive on protecting us from the perils of capitalism, we have learned to expect an instant stock market nose dive followed by higher unemployment rates and talk of greater government spending and debt and higher taxes. That's bad enough, but now the O-Team is talking about protecting us from terrorism.

Last Sunday, in a surreal "warm-up" for the Super Bowl, Mr. Obama told CBS News' Katie Couric that putting 9/11 mastermind Khalid Sheikh Mohammed on trial in New York City is a good idea. With a completely straight face, he claimed, "We're not handling any of these cases any different than the Bush administration handled them all through 9/11." It isn't entirely clear what "all through 9/11" means, perhaps because this stunningly disingenuous comment was delivered without the aid of a teleprompter. This is, after all, the man who made "closing Gitmo" his first official act as president. Evidently, the Obama spin cycle has no limits -- and there is no setting for "truth."

Set aside trying to imagine President George W. Bush putting KSM on trial in the Big Apple, just blocks from where 3,000 perished in the Twin Towers. And don't even think about how Mr. Obama could apologize to people in dozens more countries for America in general and his predecessor in particular -- only to now embrace "Bush-era practices." It is alarming how facile it has become for Mr. Obama and the rest of the O-Team to dissemble about the real risks confronting us -- and what we need to do to protect ourselves.

Last week, with the federal government shut down by a snowstorm, "nonessential personnel" were told to stay home. One of the apparently "essential personnel" was John O. Brennan, Mr. Obama's "terrorism czar," whose official designation ("Assistant to the President and Deputy National Security Advisor for Homeland Security and Counterterrorism") is worthy of a Soviet Politburo title. On Tuesday, Brennan took to the op-ed page of USA Today to spin the O-Team's decision to treat Umar Farouk Abdulmutallab, the Christmas Day underpants bomber, as a common criminal instead of as an enemy combatant.

In his column, Brennan baldly claims: "Immediately after the failed Christmas Day attack, Umar Farouk Abdulmutallab was thoroughly interrogated and provided important information. Senior counterterrorism officials from the White House, the intelligence community and the military were all actively discussing this case before he was Mirandized and supported the decision to charge him in criminal court." He then declares, "The most important breakthrough occurred after Abdulmutallab was read his rights," as if all this occurred within hours of the arrest.

Unfortunately, these assertions are flatly refuted by the sworn testimony of the CIA director, the director of national intelligence, the secretary of homeland security, the director of the National Counterterrorism Center and the director of the FBI. We now know that the initial questioning lasted less than an hour before Abdulmutallab was wheeled into surgery. We also know the "important breakthrough" that Brennan gushes about occurred six weeks after the failed attack -- and only after the terrorist's family urged him to cooperate with U.S. authorities. In short, somebody isn't telling the truth.

Worse still, Brennan's solution for handling the problem of radical Islamic terrorists dying to kill as many of us as possible is to tell us all to sit down and shut up. "We need no lectures about the fact that this nation is at war," Brennan expounds. Then, in case his point was somehow missed, he adds, "Politically motivated criticism and unfounded fear-mongering only serve the goals of al-Qaeda." In other words, if we have a major terror attack in the next three to six months -- as CIA Director Leon Panetta says is likely -- it's our fault for not just going along with the O-Team's agenda.

Following this train of "thought," it will be our fault when the theocrats ruling Iran build and use a nuclear weapon. It would not have happened had we just sat mute, like Mr. Obama, while anti-regime protesters were bullied and butchered -- as happened again this week, on the 31st anniversary of the Islamic Revolution in Iran. His last-minute announcement of unilateral U.S. "sanctions" against a handful of regime kingpins this week is feckless. Sanctions only work when applied to all corporations and banks around the world that are doing business with despots -- not just American corporations and banks. But that requires firm, consistent, honest leadership. That's the terrible truth -- and our enemies know it.

It's a good thing for Mr. Obama that the weather kept the government closed this week. The "blizzard" let him ignore the hard questions. If you have been praying for snow, you can stop now.