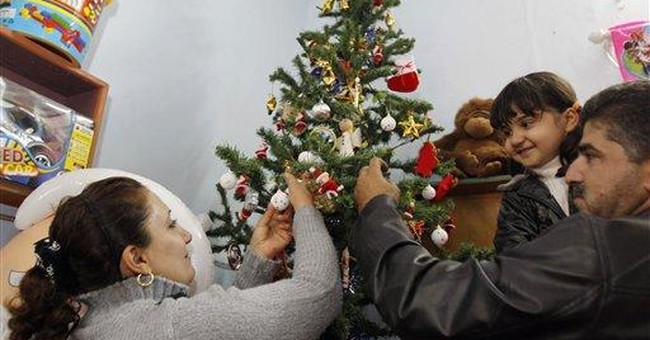 WASHINGTON -- Scrooge came early on Christmas Eve this year -- and he looks strangely like Senate Majority Leader Harry Reid. Instead of "bah humbug," he delivered the U.S. Senate's version of "health care reform" -- the most expensive legislation ever passed by the Congress of the United States and the greatest expansion of government power in our nation's history. Now that's some Christmas present -- and a different way of celebrating the birth of Jesus Christ.

If the Democratic majorities in the House and Senate succeed in cobbling together a final bill after the new year begins, every American taxpayer will take a hit in the pocketbook, and every Tiny Tim in the next generation can look forward to government-rationed medical care. According to those who purport to speak for him, President Barack Obama is celebrating this "historic event," and they aren't talking about the Nativity two millenniums ago.

For reasons apparently obscure to Obama and Reid and House Speaker Nancy Pelosi, most Americans don't seem to be as pleased at their Christmas gift as those who gave it. Perhaps that's because "We the People" see the Senate's $848 billion stocking stuffer has a price tag that would choke a reindeer.

Actually, that's just the down payment. According to the Congressional Budget Office, the first decade of the Senate's bill would cost $2.5 trillion. Even the Magi couldn't imagine a gift this precious.

Those who voted for "Change!" last year may find that's all they have left in their pockets. Administration actuaries estimate that both the House and Senate bills would accelerate growing costs for medical care. The CBO calculates that annual health care premiums for middle-income Americans would go up by $300 for individuals and more than $2,000 for families. And just in case you didn't notice, not getting health insurance is no longer an option. Higher costs may not have been on your Christmas list, but the O-Team in Washington wants you to have them anyway.

Overwhelmingly, Americans have been telling pollsters for more than a year that what they really wanted this Christmas (and the rest of the year, as well) were "jobs" and "job security." Apparently, the elves at the White House and on Capitol Hill weren't listening. Instead, they want to give us a $400 billion tax increase, new mandates on employers and higher fees for prescription drugs and medical devices. None of this would stimulate private-sector job growth.

But not to worry. "Hark! The Herald Angels Sing"; there may be new jobs -- at the Office of Personnel Management. In the Senate version of this Christmas Carol, up to 10 million Americans would lose their employer-sponsored health coverage. The individual health insurance plans for millions more would be nonexistent soon. To "ensure these Americans will never be denied coverage," OPM would set up a whole new bureaucracy to administer a government-run "insurance exchange." Though OPM is the federal agency responsible for granting security clearances -- and hopeless backlogs are commonplace -- we should be encouraged that it would do better at "managing" our health insurance. Take an aspirin, and call OPM in the morning.

The O-Team is confident that shortly after we ring in the new year, the House and Senate health care bills will be melded into one giant gift that keeps on giving -- to the federal government. There are some "fine points" to work out, such as how many of our tax dollars can really be spent on abortions and how deep the cuts in Medicare coverage for seniors will be and how much more "the wealthiest Americans" will pay. But those are just "minor details" that we are assured can be "worked out in the spirit of the season." We all should remember that "it's the thought that counts."

According to Reid, the "hard work" is done. The "exhausted" members of Congress are now home on "winter recess." Mr. Obama and his family are on their "Hawaiian holiday." Notably, the word "Christmas" is rarely, if ever, used in our government.

But that proscription isn't as pervasive as some would like. Though the majority of our elected officials call their health care bills a "gift" -- yet dare not speak the word "Christmas" -- there are others who know the true spirit of this holiday. Right now, more than 250,000 soldiers, sailors, airmen, guardsmen and Marines are deployed far from home -- a good number in harm's way. Those who wear our nation's uniform and their loved ones embody what giving, self-sacrifice and Christmas are really all about.