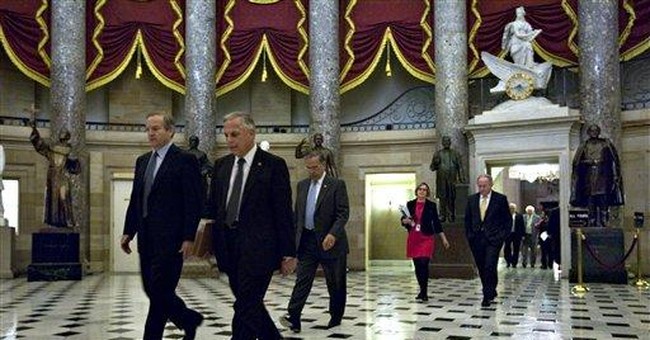 To Whom It May Concern:

Forgive the ambiguity of the salutation; I didn't know whether to address this missive to House Speaker Nancy Pelosi or Senate Majority Leader Harry Reid, and "Dear Car Czar" just sounded so, well, tacky.

Let's cut to the chase. I need a new car. I'm not asking for a bailout or anything like that. I just need some good advice, and I am hoping one or all of you can help. Here are the facts:

First, we only buy American cars in my family. My dad fought in World War II, and I always have been afraid he would rise up out of the grave and haunt me if I bought one of those Japanese or German machines. Perhaps you can recommend a pill or some kind of counseling for this problem.

I currently am driving an 8-year-old Oldsmobile, and the odometer is pushing a quarter-million miles. Yes, I know that makes me part of the problem. My wife and I just don't buy cars often enough because we don't buy things we can't afford. Silly, I know, but after 40 years of marriage, we're kind of stuck in our ways.

If it makes any difference, in my family we also have a Chrysler PT Cruiser and a Ford truck. They all are paid for, so I guess we don't qualify for federal help in paying them off. And that gets me back to the big question: What kind of car should I get?

During my career, I've driven jeeps, Humvees and even a few tanks. I once owned a Shelby Cobra, but we traded it in for a station wagon when we started having kids. My wife suggested that given my advanced age and the sad state of our economy, I should get a Winnebago. She says that way, if the bank foreclosed on our home, at least we would have a place to live.

I can't get a new Oldsmobile (is that an oxymoron?) because GM doesn't make them anymore. Speaker Pelosi said, "Come March 31, it is our hope that there will be a viable automotive industry in our country." "Hope"? I'm shopping in Virginia. Where is Hope?

In the past when I shopped for a new car, I asked friends about their recent purchases, read newspaper advertisements, paid attention to television or radio commercials, and picked up Car and Driver magazine. After compiling what Washingtonians call a "shortlist," I consulted Consumer Reports to determine how my choices ranked against similar autos. Then I bought what I could afford from a dealer I trusted.

Given what happened on Capitol Hill this week, it's clear that my way of car shopping is hopelessly outdated. Today's experts on the automobile that's best for my family and me are the members of Congress. (Please note that this acknowledgment is not meant as a slight to President-elect Barack Obama, known in our house as "PEBO." During the recent presidential campaign, PEBO admonished us all to keep our tires properly inflated. Thank you for the tip.)

PEBO's help notwithstanding, the recent congressional hearings raised questions I never had thought to ask when car shopping. For example, Sen. Chuck Schumer told auto executives that it is "unacceptable" to continue building cars with internal-combustion engines and that I should be able to buy a "plug-in hybrid electric car." Does Mr. Schumer know of such a car I can afford that would allow me to make my daily 150-mile round trip commute? If I don't make it home, will he give me a ride?

Can you give me a hint as to which of the Big Three automakers Congress will allow to survive? Will you permit the dealer where I purchase a car to stay in business? Should I get the extended warranty?

While driving, I listen to talk radio and would like to have satellite radio installed, but not if Congress is going to insist on the Fairness Doctrine. Will you?

If I get the tow package, will Sen. Chris Dodd accuse me of owning an "inefficient, gas-guzzling" vehicle and of dismissing "the threat of global warming"?

If I put down a minimal deposit at the time of purchase and then wait a few months and default on my loan, will the federal government bail me out? Because the feds will own the automakers, should I call the Department of Transportation or the "car czar" when I need a tuneup?

The best solution for my problem is to have a member of Congress join me while I hunt for a new car. I hope the member you assign can "kick the tires" and answer some of these questions -- and one other:

Congress has insisted that auto company executives achieve performance standards or be financially penalized. The CEOs of Chrysler, Ford and GM all are working for $1 per year. Shouldn't congressional pay be adjusted the same way?