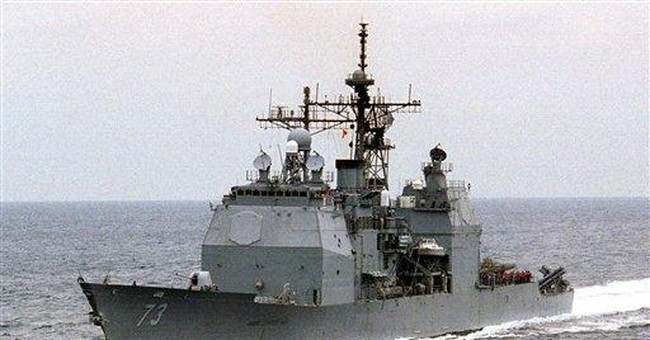 MYRTLE BEACH, S.C. -- In early January, this oceanfront resort community is usually a pretty quiet place. This year, however, nothing is usual. This week, hotel rooms are packed, and the lobbies are crowded with presidential candidates, their campaign aides, political activists and more than 700 members of the international press corps. They are all here to participate in a series of debates and the upcoming first-in-the-South primary election. I also have discovered that among the media are a number of aliens from a parallel universe where nothing seems as it is.

This morning, as I stepped off the elevator, I was ambushed by several of my Fourth Estate colleagues. They wanted my opinion -- not about the presidential campaigns, not about the surprise planned deployment of 3,000 more U.S. Marines to Afghanistan but about last week's incident in the Strait of Hormuz.

Referring to the Jan. 6 episode in which five Iranian patrol boats made high-speed runs toward and around three U.S. warships transiting the vital, 21-mile-wide waterway, one of the reporters asked, "Doesn't this seem suspiciously like the Tonkin Gulf Incident in 1965?"

Taken aback, I responded, "Not from what I have seen on the U.S. Navy videotape shot from the bridge of the destroyer USS Hopper. It clearly shows high-speed vessels racing around the cruiser USS Port Royal and the frigate USS Ingraham. The accompanying soundtrack confirms what President Bush said -- that this was a provocative act and that the Iranians were threatening our warships in international waters."

My answer was clearly insufficient for my inquisitor. "Well, what about the Iranian navy videotape that shows nothing even remotely threatening?" one asked.

In an effort to end the "interview," I answered, "Those who believe the Iranian version of any incident are people who hate America or those who believe that every event is part of some grand conspiracy theory. Which one are you?"

Hoping that my response was offensive enough to end the line of questioning, I headed out the door. But before I could make my escape, one of the other correspondents caught up with me. To my surprise, he posed a legitimate query: "Why would the Iranians confront three U.S. warships?"

"I don't know," I replied, "but I'll call some friends, and if I learn anything I can write or talk about, I'll put it in my column this week."

Here's a recap of some of what I learned from current and former military and intelligence officers this week:

-- The maritime arm of Iran's Islamic Revolutionary Guard Corps -- the same gang of thugs who took 15 British marines and sailors hostage in March 2007 -- has been doing this kind of "inspection" of merchant ships and combatants passing through the Strait of Hormuz for years, though they have become "much more aggressive" in the past 10 months. "On more than one occasion, U.S. warships have fired warning shots across the bows" of IRGC speedboats.

-- Throughout this most recent encounter, all three U.S. warships were consistently at least three miles within international waters. One of the IRGC craft displayed an Iranian flag, and as they closed at high speed toward the American vessels, one of the Iranian boats broadcast over the radio in English: "We are coming for you. You will explode in a few minutes."

-- The entire event took place over a half-hour time span, and the U.S. ships were at general quarters and "fully prepared to engage" throughout. At several points in the encounter, the IRGC boats took aggressive action and "maneuvered within 500 yards of our ships," and two of them dumped "floating objects" in front of the American vessels, forcing them to change course.

-- An unnamed U.S. intelligence agency was aware that the IRGC intended to confront this transit of American warships through the Strait of Hormuz and can verify that, "Tehran's claim that this was 'a case of mistaken identity' is simply bogus."

One of my sources suggested that Iran's motive for this confrontation on the eve of a major presidential trip to the Mideast was Mahmoud Ahmadinejad's effort to remind everyone that he can cut off 25 percent of the world's oil whenever he wants.

If that is what the theocrats running Tehran believe, then it's time for the U.S. Navy to remind them what happened in the Gulf of Sidra in August 1981 -- when Moammar Gadhafi sent up Libyan fighters to challenge the 6th Fleet in international waters. Go ahead, Mahmoud, look it up on Google. It may be instructive.