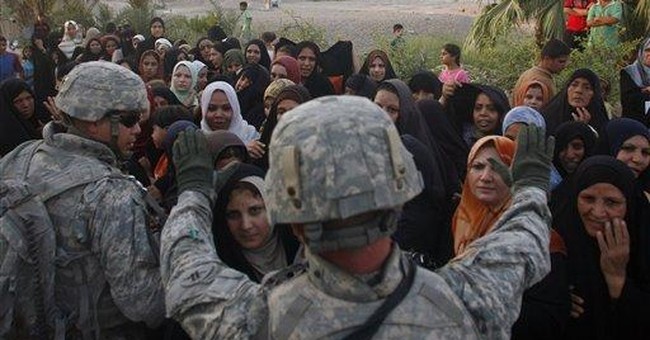 WASHINGTON -- For three years, politicians and pundits have been challenging the president's policy of spreading democracy around the world. Can't be done, particularly in the Middle East, they tell us. Won't help to make us safer, they claim. It's become a mantra of the left. To support their assertion that democracy has reached inevitable limits, they cite problems in Afghanistan with a resurgent Taliban and, of course, the U.S. "failure" in Iraq. Both of these issues were raised repeatedly with President Bush during his news conference on the economy this week.

Despite evidence of progress on the ground in Iraq, the masters of the media intend to continue their barrage of defeatism, and the majority in Congress appear unwilling to desist in their attacks. The mainstream media all but ignored news releases from Iraqi and coalition commands on successes against both Iranian-backed terror cells in Baghdad's Sadr City and Al Qaeda's network in Northern Iraq, Salahuddin, Diyala and Anbar provinces.

Instead of covering these stories with in-depth reporting from the front, the potentates of the press launched a shock-and-awe campaign of their own. The target? The Iraqi Parliament -- for taking a monthlong recess in the midst of a war.

Perhaps the media and politicians who are so outraged that the Iraqi legislature is on vacation should learn a bit of history. The British Parliament recessed for all but one holiday -- the summer of 1940 -- throughout World War II. In keeping with this democratic tradition, the U.S. Congress has done the same thing during every war we have fought, including our own Revolution.

Rather than firing barbs at the Iraqi legislature, critics should focus their ire on Capitol Hill. The 110th Congress, led by Sen. Harry Reid and Speaker Nancy Pelosi, is setting new records for irresponsible behavior. Though they have found time to launch more than 600 investigatory hearings, our good senators and congressmen fled Washington this week for a month in the sun without passing any of a dozen appropriations bills, including those needed to support our troops in the field. This week, the shipment of new armored vehicles, necessary to protect U.S. soldiers from deadly Improvised Explosive Devices (IEDs), was postponed for lack of funding.

Little of this congressional misfeasance -- or its consequences -- made its way onto the front pages of major U.S. newspapers or the network news. Nor was anything but scant attention paid to a recent nationwide USA Today/Gallup Poll showing the proportion of those who believe that additional U.S. troops are making the situation better in Iraq rose to 31 percent. That's up from 22 percent a month ago. Those who said it was not making much difference dropped from 51 percent to 41 percent.

A shift in public opinion this significant would be hyped in any political campaign -- and likely make the pundits take notice. Instead, almost to prove the people wrong, we have been treated to yet another avalanche of headlines and lead stories bemoaning bad things in Iraq. "Five More Boycott Iraq Cabinet Sessions," said an Associated Press headline. "Iraqi Political Crisis Worsens," screamed ABC News. "26 U.S. Troops Killed in 1 Week in Iraq," blared a CBS headline. The Washington Post ran, "Weapons Given to Iraq Are Missing."

The Bush administration has, up to now, been able to alter the negative editorial perspective of those who decide what will and will not be reported about this war. For the past six months, that task has fallen to Gen. David Petraeus. He certainly has tried.

During an exclusive interview this week on FOX News Radio's Alan Colmes Show, Colmes asked the general bluntly, "Is the surge working?" His reply: "It is. We are making progress. We have achieved tactical momentum in many areas, especially against Al Qaeda in Iraq, and to a lesser degree against the militia extremists. We're also heartened by the number of Iraqi tribes and local?citizens who have rejected Al Qaeda."

Asked whether Iraqis could take over their own security, the general replied, "They have actually taken over security in a number of different places If you look at Samawa, Nasiriyah, Najaf, Karbala -- we hardly have any forces in those locations at all."

Though Alan Colmes is anything but a shill for the Bush administration, his liberal media colleagues simply ignored these previews of what Gen. Petraeus will tell Congress in September. One can only conclude that they don't want the American people to get any good news from the battlefield.

It's time to face facts. The American media simply isn't going to march in step with this war. My eight trips, embedded with U.S. units, letting our troops tell the story, haven't been enough. Having the battlefield commander tell the story hasn't worked. Neither have video conferences from the Situation Room, talking points issued by the Pentagon or news conferences such as this week's from the White House press room.

There is, however, a way to reach the American people while our Congress is on vacation. Chief Executive George W. Bush can't do it from Washington or his dad's place in Kennebunkport, Maine. After kissing French President Nicholas Sarkozy on the cheek and taking him out to fish, Commander in Chief George W. Bush needs to jump on Air Force One and fly to Iraq.

Now is the time to change the paradigm, Mr. President. Your visit will confound America's adversaries and reassure our allies. The troops will be forever grateful. And most Americans will admire you for going because it's the right thing to do.