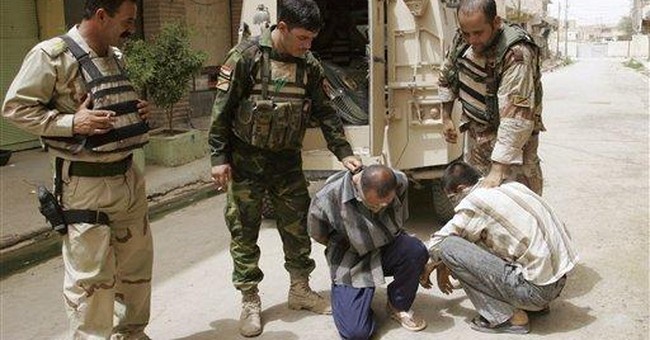 GEORGETOWN, S.C. -- Here in the "Low Country" along the Carolina coast, where Francis Marion once drove British Redcoats madder than the noonday sun, patriotism is a serious topic. Thousands of young South Carolinians are serving in Iraq, Afghanistan and in the Persian Gulf. "Support Our Troops" signs are ubiquitous. Maybe that's why so many of these good people profess confusion about what's happening in that part of the world -- and in Washington.

This week, most of the conversations with shopkeepers, tradesmen and the nice folks we see once or twice a year when we vacation down here have gone something like this: "Love your show on Fox News. Your reports from the war with our boys are great. Are those people in Congress going to pull 'em out before the job is done?" And, "why are we caving into the Iranians? Are they really building a bomb?"

Compliments are great. We all love to hear them. I do too, but being considered an "expert" on congressional misfeasance and the vague trajectory of American foreign policy is getting to be more of a hurdle than I can leap. The problem became especially acute this week in the aftermath of the House of Representatives passing a resolution calling for U.S. troops to be withdrawn from Iraq by April 1, 2008 and our State Department's announcement that we should have "another face-to-face meeting" with the Iranians.

"What good does it do to talk to the Iranians? Don't they just lie?" asked the young man at the hardware store where I went to buy what I needed to repair a broken screen door. He said he had served in Iraq with the South Carolina National Guard and has friends still "over there." His question deserved an answer, but I didn't have one. I'm as confounded by these developments as he is, but I vowed to get back to him after I learned more.

When I got back to the house, instead of fixing the screen door, I turned on my computer and groped around the Internet for why we need to meet with the mullahs. According to Foggy Bottom spokesperson Sean McCormack, we should talk to the theocrats running Tehran, because we have "to directly convey to the Iranian authorities that if they wish to see a more stable, secure, peaceful Iraq, which is what they have said they would like to see, that they need to change their behavior."

Apparently McCormack delivered this line with a straight face and no one laughed out loud or fell off their chairs at the thought of the Iranians changing their behavior, because our diplomats sipped tea and chatted with them. Maybe that's why so many citizens down here are confused about what's happening in Washington. These folks may be 500 miles from our nation's capital, but they think that the people in our government ought to -- as one put it to me yesterday -- "make sure we're not being played for suckers," and he's right.

Earlier this month, in a teleconference from Baghdad, Army Brig. Gen. Kevin Bergner described how the Quds Force, an elite unit of Iran's Revolutionary Guard has been playing "key roles in the planning and execution of bombings, kidnappings, extortion, sectarian murders, illegal arms trafficking, and other attacks against the Iraqi people, the police, the Iraqi army, and coalition forces." He went on to note that, "Our intelligence reveals that the senior leadership in Iran is aware of this activity."

Can our State Department's diplomats say anything that would persuade the duplicitous "senior leadership in Iran" to "change their behavior"? There is little evidence that "talks" with Tehran can produce anything except Iranian advantage.

For more than four years European emissaries, U.N. officials and U.S. negotiators have been trying to convince the Ayatollahs to desist from building nuclear weapons. It hasn't worked.

Six months ago, U.S. arms experts estimated that it would be three to five years before the Iranians could build nuclear bombs. Last month Israel's Directorate of Military Intelligence revised its forecast for Tehran attaining a nuclear capability to "mid-2009." And last week, our diplomats complained that Beijing is continuing to ship equipment and technology to Iran that can be used to build nuclear weapons and ballistic missiles. In response to these gloomy developments, the United Nations, the Europeans and liberal U.S. politicians, fearful that the Ayatollahs might cut oil production, counsel caution -- and more talks.

Thus far, talking has gotten us nowhere. Given the history of previous "negotiations" with the radical Islamists running Persia, their stated goals for driving "infidels" from "the lands of the Prophet" -- and their unabated quest for nuclear weapons, we should be quietly supporting anti-Ayatollah movements inside Iran instead of further legitimizing the regime in Tehran with more talks.

Early this morning, I again encountered the young veteran who had buttonholed me at the hardware store earlier in the week. "Well," he asked, "did you find out if we're really going to sit down with the Iranians?"

"Looks like it's going to happen," I replied lamely.

He shook his head and said, "It just doesn't make any sense to me." I agree.