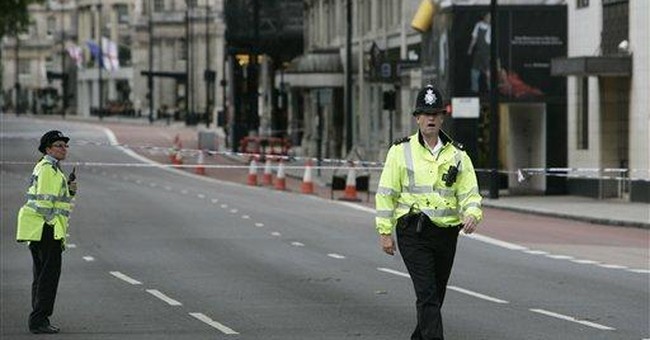 WASHINGTON -- On July 4, President George W. Bush told the troops and families of the 167th Airlift Wing in Martinsburg, W.V. that, "Our first Independence Day celebration took place in the midst of a war -- a bloody and difficult struggle that would not end for six more years before America finally secured her freedom." He went on to urge "more patience, more courage, more sacrifice," in order to achieve victory in Iraq. If we were to quit Iraq before the job is done, the president explained, "the terrorists would follow us here," and he reminded his critics, "These people want to strike us again."

Mainstream media coverage of the three-part event -- two car bombs that failed to detonate in London and a flaming SUV driven into the front of the airport terminal in Glasgow, Scotland -- was a bigger dud than the doctors' poorly designed vehicular-borne improvised explosive devices (VBIEDs). Even before the terror suspects were identified, cable news and wire service reports were trying to link the botched attack to the war in Iraq.

MSNBC described the attempted attacks as a "chilling new threat: Iraq-style devices. The car bombs were similar to highly destructive explosives used in Iraq and could have killed hundreds of people." According to AFP, "terror threat returns to London after two Iraq-style car bombs were defused." The words "Iraq-style" were hyped in dozens of other print and broadcast reports.

Activists and politicians who want to begin extracting U.S. and British troops from Iraq have seized on the London-Glasgow events as "proof" that the mission in Iraq has already failed. Readers, listeners and viewers are drawn inescapably to the conclusion that this attempted attack would likely not have happened had British troops been withdrawn from Mesopotamia. But those who know anything about terrorism realize that the description of this most recent event as "new" or "Iraq-style" is at best incompetent -- and at worst a scam.

First, it is interesting to note that while one of the alleged perpetrators, Dr. Bilal Abdullah, is apparently a refugee from Iraq, not one of the British government, police, or intelligence spokesmen who have described the London-Glasgow devices -- or those detained in connection with the failed attacks -- has uttered the words: "Iraq-style." The phrase is entirely the creation of the media.

Second, VBIEDs are hardly an Iraqi invention. Al Qaeda terrorists, Shiite militiamen and Baath militants in Iraq may have elevated car bomb carnage to the level of a new art form, but they are far from the originators. Bolsheviks and anarchists perfected the technique early in the last century. One of the earliest was a horse-drawn wagon detonated on Sept. 16, 1920 on Wall Street that killed 40 and wounded more than 300. The Israeli Stern Gang, the IRA, Islamic Jihad, Hezbollah and the Muslim Brotherhood all used VBIEDs for decades before U.S. troops set foot in Iraq.

Finally, those of us who have actually seen and felt the effects of real VBIEDs know that describing the London and Glasgow devices as "similar to highly destructive explosives used in Iraq," is grossly misleading. In Iraq, and increasingly now in Afghanistan, IEDs of all kinds -- including those driven by terrorists bent on suicide -- are usually constructed using military explosives, prima-cord and heavy artillery rounds connected to sophisticated detonators.

Unlike "Iraq-style" car bombs, the London-Glasgow devices were apparently built with propane ("Patio gas" in the U.K.) tanks, gasoline and improperly wired cell phone detonators. Though certainly capable of inflicting serious casualties, these devices would be unable to do anything like the kind of damage done by the VBIEDs our troops encounter regularly on Iraqi roads. Thankfully, the doctors of death in Great Britain were incompetent bomb builders.

Instead of trying to distract us with bogus connections between the failed London-Glasgow attacks and the war on Iraq, the media would better serve the interests of the American people by more carefully reporting on why well-educated Muslim professionals want to kill us.

Who are the imams, mullahs, sheikhs or ayatollahs with the power of persuasion to convince doctors to abandon their Hippocratic oath: "I will prescribe regimens for the good of my patients according to my ability and my judgment and never do harm to anyone"? How do they entice engineers to devote their lives to destruction? What could they say to prompt an experienced airline pilot to kill his 217 passengers by crashing his plane into the sea?

"These people," as the president said on Independence Day, "want to strike us again." Why, and where, and how, have much more to do with radical Islam than they do with Iraq.