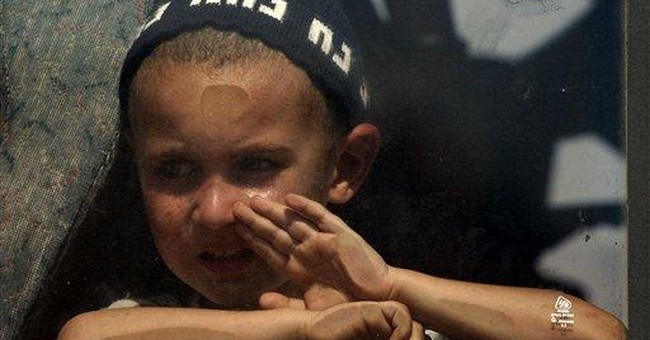 WASHINGTON -- Fifty-nine years ago this week, David Ben-Gurion spoke into a radio microphone and declared, "We hereby proclaim the establishment of the Jewish state in Palestine, to be called Israel." Almost immediately thereafter, President Harry Truman signed a directive ordering that "The United States recognizes the provisional government as the de facto authority of the new State of Israel," -- making ours the first country to acknowledge the new nation.

At its founding on May 14, 1948, the tiny Jewish state, about the size of New Jersey, had a population of less than 850,000, and was surrounded by enemies intent on its obliteration. Today, 6.4 million people call Israel home, and it remains the only functioning democratic government in the neighborhood. As it was in the beginning, and is now, powerful opponents in the region remain committed to annihilating what they describe as "the Zionist entity." Unfortunately, some of those hostile neighbors may soon acquire the means of achieving their goal.

In the United States, Independence Day is a national holiday -- a day of relaxation, a time for picnics, concerts, parades and fireworks. Not so in Israel, where Independence Day is a time for heightened alert -- and an annual military exercise -- just in case a threatening neighbor decides it's a good time to attack. Hamas, the Palestinian terrorist organization that operates under the protection of the United Nations, commemorated the 59th anniversary of the founding of the first Jewish state in 2,000 years by firing eight rockets into the Israeli town of Sderot. The missiles landed on a school building, injuring 17 civilians, including women and children.

But according to friends with whom I worked for years in counter-terrorism, a handful of Katusha rockets from Gaza or the West Bank are the least of Israel's concerns at the moment. My Israeli sources say that this year's annual defense exercise focused on "the threat of Syrian military units joining Iranian-supported Hezbollah fighters from Lebanon in a major offensive against Israel."

Israeli newspapers confirm this information. The Jerusalem Post reports that this year's exercise was intended to test Israeli Defense Forces' "performance and interaction in a war game simulating an all-out regional war." On Tuesday, Prime Minister Ehud Olmert and Defense Minister Amir Peretz, both targets of intense criticism for failures in planning and decision-making during last summer's campaign against Hezbollah, participated actively in the annual exercise. This is the first time senior political figures have been directly engaged in such a drill.

"What you're not seeing in the press are other measures that are being taken to prepare for an attack," a retired Israeli official told me. "Last summer's engagement on our northern border exposed major deficiencies in civil defense, medical evacuation procedures, logistics support and planning for dislocated non-combatants. We must urgently address these problems because time is running out."

The sense of urgency may be well founded. While Israeli civilians marked their country's birth and Israeli soldiers were figuring how to defend their country from attack, the International Atomic Energy Agency (IAEA) -- the U.N.'s toothless "nuclear watchdog" -- "discovered" that Iran was moving "much more rapidly than expected" to enrich uranium.

Last month, Mohamed ElBaradei, the IAEA director general, dismissed claims by Iranian President Mahmoud Ahmadinejad that Tehran had activated 3,000 centrifuges to enrich uranium. Now ElBaradei tells The New York Times that the Iranians have "solved the technological problems" and are moving ahead with enrichment. Evidently The New York Times did not see any connection between this revelation and Ahmadinejad's description of Israel as "a rotten, dried tree that will be eliminated by a single storm."

When I queried my Israeli friends about this development, one replied, "Why is anyone surprised? The IAEA didn't know that the Indians, Pakistanis or North Koreans were enriching uranium until they all built bombs. So, do you expect us to wait for an Iranian nuclear weapon on Tel Aviv before we act?"

By "you," my friend didn't mean me, he meant the United States, the first nation to recognize the existence of Israel. I didn't have the heart to tell him that the survival of the Jewish state isn't on the minds of many here. In the salons of Washington, the discussion is all about how to extricate ourselves from the war in Mesopotamia.

While sipping lattes, editorial board members conclude that things aren't going well, so we must end our involvement with the same lack of commitment as that binding a Hollywood marriage. It's been five years, after all -- longer than World War II. Our drive-thru culture and ADD-afflicted electorate just don't have the staying power to defeat a determined enemy.

The war is lost, says Harry Reid. Democrats demand withdrawal. The White House stumbles and stammers to try to explain the threat. Terrorists plotting to attack a major military base in our homeland are rooted out and the mainstream media gives it the same attention as teenagers apprehended painting graffiti under a bridge.

If Israelis want to celebrate a 60th birthday, they better not count on Washington. If it had been up to this crowd, the Jewish state would have been destroyed long ago.