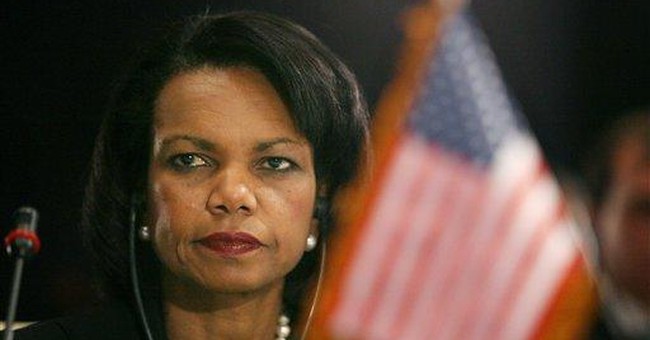 WASHINGTON -- This week the State Department published its annual Country Reports on Terrorism. For those who want facts about the radical Islamic jihad being waged against the West, it's fascinating reading. For simpering solons in Congress, slithering back up Capitol Hill with their vetoed "surrender supplemental," it is bad news. And for those with any grasp of history, it's deja vu.

Twenty years ago this summer, a joint select committee of Congress convened to investigate certain activities of the Reagan administration. In the midst of what became a nationally televised circus, one of the witnesses observed: "If you can't convince those who sponsor terrorism to desist from their support, then you are left to either protect yourself close in or to reach out to prevent and deter the act."

In the two decades since those hearings, radical Islamic terror has become the most serious threat to U.S. citizens, property and interests since the collapse of the Soviet empire. For years it was "someone else's problem" because it only happened "over there." Then, on Sept. 11, 2001, radical Islamic terror blew up in our midst -- "close in" was how I put it in 1987. Clearly we had not been doing all we could to "convince those who sponsor terrorism to desist from their support." And according to the data in this year's report, we still aren't.

Since it is prepared by the State Department, the report puts it a bit more diplomatically: "five years after 9/11, the international community's conflict with transnational terrorists continues." Though "cooperative international efforts have produced genuine security improvements," the report says, "major challenges remain."

Digging into the reports reveals other disturbing indicators. Bombings are up by 30 percent and casualties from explosive devices have increased by 39 percent. Individual suicide bombing attacks, where a terrorist wears or carries an explosive device rather than driving a bomb-laden vehicle, are up 25 percent. More than 50 percent of the victims of these attacks perpetrated by Islamic radicals were other Muslims. Among those casualties were more than 1,800 children, an 80 percent increase from the previous year.

Despite these horrific trends, no Islamic leader or cleric has denounced those who recruit, indoctrinate, train and arm the suicide bombers who kill children. By contrast, in the aftermath of last month's murders at Virginia Tech by a deranged Korean American student, the government of Korea, dozens of Korean American community groups and the killer's family all expressed remorse and condolences for the victims.

In a glaring indictment, the report again cites Iran as "the most significant state sponsor of terrorism." Governmental organs of the Tehran regime, specifically the Islamic Revolutionary Guard Corps and the Ministry of Intelligence and Security, are identified as "directly involved in the planning and support of terrorist acts." Both Iran and Syria routinely provide "safe haven, substantial resources and guidance to terrorist organizations."

The Syrian government is also implicated for providing "political and material support to Hizballah and political support to Palestinian terrorist groups." The report contains a litany of offenses, including political assassination in neighboring Lebanon, providing assistance to terrorist organizations that have killed Americans, offering refuge to known terrorists and allowing "foreign fighters and terrorists to transit through its borders into Iraq."

Critics will use this year's Country Reports to "prove" that this upsurge in lethal terror is the consequence U.S. engagement in Iraq and Afghanistan, where slightly more than half of all attacks occurred in 2006. But such a claim ignores the global nature of the radical Islamic assault, and presumes that state sponsors such as Iran and Syria would desist if we simply pulled out.

Those who insist on removing U.S. troops from Iraq should clarify how such a withdrawal will alter the behavior of those who rule in Damascus and Tehran. While they are at it, critics of the current campaign in Mesopotamia should also explain how "disengagement" would have prevented the 9/11 attacks here in the United States.

Rather than using this year's Country Reports on Terrorism as a bludgeon for scoring domestic political points, policy makers should use the data and analysis to develop better tools for thwarting transnational Islamic terror. Despite a dramatic increase in radical Islamic attacks and casualties, the report makes clear that the strength and vulnerability of these terrorist organizations remains the need for state sponsorship.

"De-funding" Islamic terror must become a top priority. As Saudi authorities discovered this week when they prevented what could have been a devastating attack on their oil infrastructure, lip service to cutting off the flow of Wahabbi petrodollars to Sunni terror groups and turning a blind eye to Iranian terrorism is an invitation to catastrophe. The plot was apparently discovered by allied intelligence in Iraq. Good thing for those of us who already feel the pain at the pump.